Serving in the military can be a stressful job. Long hours, difficult assignments and sometimes dangerous deployments—the career is never an easy one. But for some members of the military, American Paint Horses provide a welcome diversion from their jobs. Even more than that, these riders know their horses bring comfort and balance to their lives. 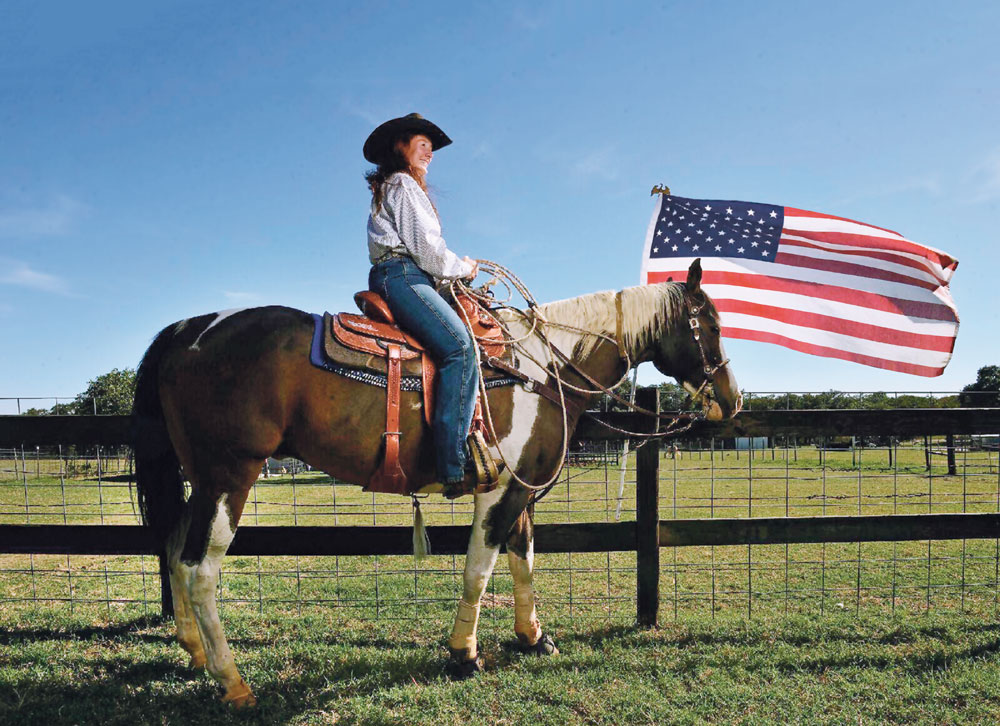 Lieutenant Colonel Val Baker and her partner of a lifetime, Capital Business.

Lieutenant Colonel Val Baker has had several horses during her time in the military, but Capital Business (“Cappy”) is her lifelong partner. Purchased in 1998 through a trainer friend while Baker was stationed in Sarajevo, Bosnia, the 1996 gelding has taken her to world titles in every event in which she regularly competes. These include heading, heeling, breakaway roping, tie-down roping and goat tying. But Cappy is up for anything, says Baker, even teaching 6-year-old girls to ride.

“I’ve tried everything on Cappy,” says Baker. “We’ve done versatility ranch, we did some dressage and jumping, including a couple of cross-country courses, and then turned around and went to a rodeo. Anything I’ve ever asked of him, he’s done and been so good at it. He just tries, and that’s the best thing.”

“Except for deployments and overseas assignments, my horses have been with me everywhere I’ve gone. I’ve been to the APHA World Show and Houston Rodeo every year I could,” she says.

Baker has had an exciting military career. Her area of expertise is the full spectrum of communications, from submarines to computers and satellites. Horses have provided Baker with a way to instantly develop rapport during assignments.

While stationed in Naples, Italy, for three years, she found a riding club and started jumping with local riders. She partnered with a woman to buy a horse and competed in Italy. She even made an Italian friend that roped in a EuroDisney show, and got introduced to United States Team Roping Competition (USTRC) competition in Italy.

“I can speak ‘horse Italian’ pretty darn good,” says Baker. “And roping at the USTRC competition in Milan was so much fun.”
While stationed in Iraq, where she was an advisor to the Iraqi Air Force, Baker says horses helped her with her work. On her first visit, she was having a hard time connecting with an Iraqi ministerial communications officer. But when she dropped a photo of her horses during a meeting with him and he saw it, he shared his own background as a racehorse trainer, and their working relationship improved in leaps and bounds.

Paint Horses give Amanda and Gabe Exman the perfect way to spend time together. Former 1st Lieutenant Amanda worked as a military intelligence officer during her time in the Army National Guard. Now a veteran, she is working on her doctorate of psychology. Gabe is a major in the Minnesota National Guard, with 17 years of experience in the military.

Currently located in Isanti, Minn., the couple has five horses right now, acquired over the course of their relationship.
“The running joke is for every six months I get deployed, she gets another horse,” Gabe says. “It started as a joke, but kind of turned out to be true.”

Amanda loves competing in hunter under saddle classes at American Paint Horse Association (APHA) events with her 5-year-old mare, All In The Moment. Nicknamed “Kaylee,” the Paint Horse has earned Minnesota Paint Horse year-end awards and has placed at the Open Amateur APHA World Championship Show.

“I definitely like the competition,” Amanda says. “I love seeing all of my hard work pay off when we do well. I find it very exciting, and I take pride in that. It’s also helped me build a lot of confidence in my skills and assert that in other areas.”

Gabe likes working with the couple’s broodmares and foals, but he also loves to unwind by taking his 2003 Paint Horse gelding Zippos Magic Loot out on scenic trail rides.

“Trail riding is probably the best way to get out and really experience nature,” Gabe says. “Walking out there [on foot], you aren’t going to cover the ground that a horse can. And you’re never going to be able to drive out and see the things you see when you’re out trail riding. You go a little ways out into the woods and it’s amazing how much you see the horses relax, and nature will come a little closer.” 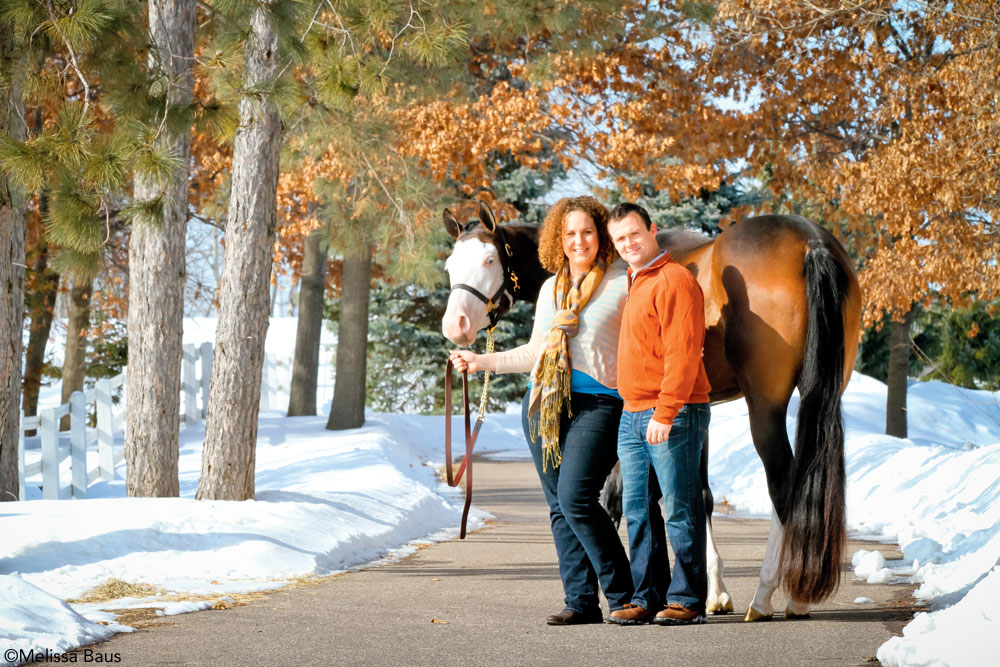 Spending time with their Paint Horses is how veteran Amanda and Major Gabe Exman connect in their off time.


Amanda’s days are packed with graduate school and her internship, and when Gabe isn’t serving in the National Guard, he’s working full time at a civilian job and finishing his last semester of a master’s program. The pair are busy, and their off time is spent feeding their horses, cleaning stalls, riding, managing broodmares and babies, traveling to shows and just sharing their mutual passion for Paints. Since Amanda trains her own horses, she says most of their date nights are spent at the barn where they keep Kaylee. “Honestly, we plan most of our vacations around show season,” Gabe says. “That’s our time together and where we get to see each other the most.”

In addition to being a hobby he shares with his wife, Gabe says he noticed when he returned from a 23-month deployment to Iraq and Kuwait that the horses were a good indicator of how he was processing his return.

“You can get up and go to work and push those problems below the surface,” Gabe says. “I can do great work at my job and work with the people there. But when you go out into the barn and you’re going to work with a yearling or do some trail riding, horses know it. You can fool a co-worker, but you’re never going to fool your horse. They’re going to know if something’s wrong and you’re not present, and they’re not going to perform for you. I give the horses a lot of credit. I think they really challenged me when I came back.”

Equine-assisted psychotherapy is gaining exposure in the mental health field, and it’s been shown to be particularly helpful for veterans. Brooke Knox is the clinical director of Paws for Reflection Ranch (pawsforreflectionranch.org) in Midlothian, Texas, a facility that uses horses for several types of equine-assisted counseling.

One of the center’s therapy horses really tends to gravitate toward the veteran clients. Knox says Cherokee, a 14-year-old Paint gelding, seeks out veterans during therapy sessions. He is attuned to their mannerisms, and the veterans love to work with him.

“Veterans are Cherokee’s favorite clients to work with,” Knox says. “With his veteran clients, he sees them coming and he greets them at the gate. He’ll leave his hay and his nap to go be with them. It’s very obvious that he enjoys working with them.

“He’s worked with some clients with pretty severe post-traumatic stress disorder, depression and suicidal thoughts,” adds Knox. “The veterans are just drawn to him.”

Working with horses is a non-threatening way for clients to address issues. Knox explains that horses help veterans learn how to develop relationships, improve communication and better regulate their emotions.

Paws for Reflection’s equine manager Kylie Heath says their Paints are particularly suited for therapy. “Our Paint Horses are just really willing to do anything we ask of them,” Kylie said. “By nature, the breed tends to adapt well to different surroundings. They are confident, which makes them great for working with people that just need some confidence.”

ABIGAIL BOATWRIGHT is a freelance writer and photographer based in Texas. 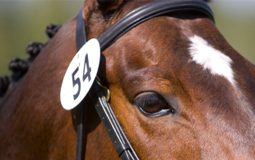