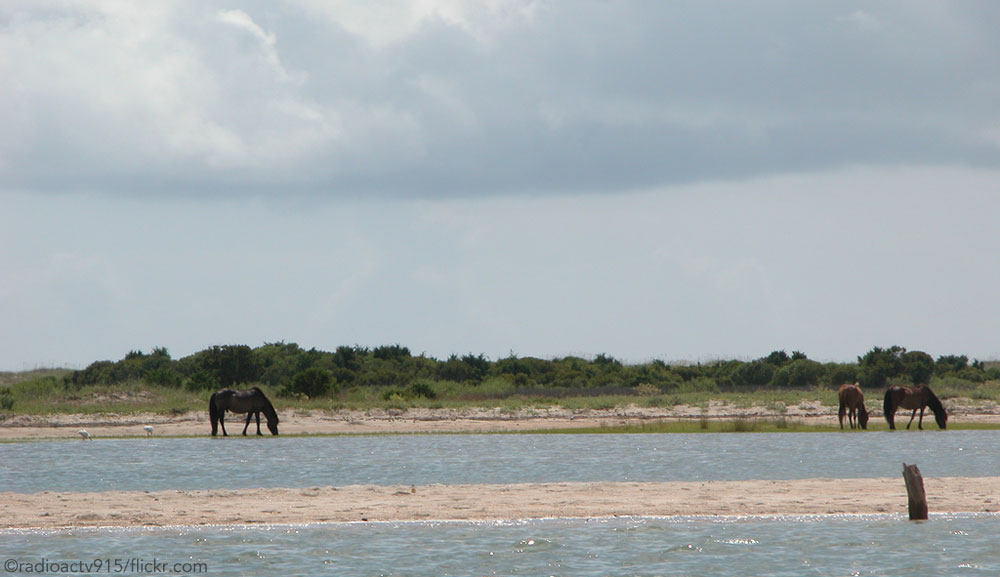 On the outer banks of North Carolina, amid the soft sand and rolling surf, wild horses graze among the marsh grass. Their ancestors arrived on this windswept shoreline 500 years ago.
To the south, another group of wild horses dwells within the coastal swampland, living out its existence among the saltwater marshes. They also came to the Carolinas in the 16th century.

These horses, the North Carolina Banker and the South Carolina Marsh Tacky, are descendants of the Spanish horses that landed on the Atlantic coast with early European explorers centuries ago. Today, they are considered not only rare but truly unique.

The North Carolina Banker got its name from the Outer Banks of the Tar Heel State, where the horses make their home. According to information gathered from historic journals of exploration and colonization sailing vessels from the 16th century, one of the first explorers to land on the coast of North Carolina was a Spaniard named Lucas Vasquez de Allyon. Allyon sent one of his captains on an expedition that landed at River John the Baptist, possibly today’s Cape Fear. Other explorers from Allyon’s expedition also landed nearby. The explorers soon clashed with the Coree Indians living in the area, and when Allyon and his men abandoned the area, they left their horses behind.

Several decades later, more horses of Spanish origin came to the Outer Banks when English colonists in the area traded with nearby Spanish explorers for horses and other goods.

The Outer Banks were eventually abandoned as a settlement because of strife with the Indians and lack of food. But the horses of Spanish origin remained. They became accustomed to the climate, and through natural selection and isolation, became a hardy and distinct breed.

In the mid-1800s, farmers who had settled near the Outer Banks regularly rounded up horses descended from the original Spanish stock. They used these horses as working animals on their farms, although not all survived the change in lifestyle.

Fast forward nearly 200 years and the descendants of these horses still remain on the beaches where they landed before America was a country. In the more remote areas of the Outer Banks, the horses are believed to be pure to their original Spanish roots.

In 1982, representatives of the Spanish Mustang Registry based in Wyoming visited the Outer Banks to see the last known remaining bands of wild Banker horses. On the remote Currituck County Outer Banks, they found horses that very much resembled their Spanish ancestors.

Today, wild horses can be found in different areas of the Outer Banks: in the Corolla area, the Shackleford area and the Beaufort area. Another semi-feral group, the Ocracoke, is kept in a 180-acre fenced-in area near the town of Ocracoke. Only the Corolla, Shackleford and Ocracoke are considered to have pure Spanish blood.

As the Corolla area became more developed and State Route 12 was extended into the area where the Corolla Banker horses live, many were hit by cars. In 1989, the Corolla Wild Horse Fund was organized and spent the next six years working to have a sound-to-sea fence built, along with a cattle guard, to protect the remaining horses.

Today, the Shackleford Banker horses occupy 7,544 acres of the Outer Banks that can only be reached by boat. That land is also occupied by close to 700 private residences. Thanks to federal legislation enacted in 1998, the Shackleford Banker horses—which occupy the southernmost part of the Outer Banks and are designated as wild Colonial Spanish Mustangs—are allowed to freely roam 3,000 acres of Cape Lookout National Seashore. The target population of this herd is between 120 and 130. The government rounds up the horses periodically and places individuals up for adoption in order to manage the herd’s numbers. Contraceptives are also used on mares to help keep birth rates low.

The Corolla Bankers are not currently protected by federal legislation like their Shackleford cousins, and their numbers are dangerously low—less than those of the Shacklefords. Advocates for these horses are working to pass the Corolla Wild Horses Protection Act to help properly manage the herd. It passed the House of Representatives in 2013 as H.R. 126, but still needs to be voted on by the Senate.

Throughout its history, the Marsh Tacky has served as a riding and work horse for residents in the area where it developed. During the Revolutionary War, Marsh Tackies were used by troops of the famous “Swamp Fox,” military leader Frances Marion, who fought against the British occupation of South Carolina. Through the years, local families kept Marsh Tackies, and breeders of these horses are currently active trying to preserve and promote the breed. Unlike the Banker horses, it’s common to see the Marsh Tacky used in a number of different disciplines.

“Marsh Tackies are great riding horses because they are easygoing, confident horses,” says Wylie Bell of the Carolina Marsh Tacky Outdoors group in South Carolina. “They are curious by nature, so they handle new things and new environments very well and with a cool head.”

Bell describes them as quick to learn and people-oriented, so a trusting relationship forms naturally between horse and human.
“They are very surefooted and nimble, and with good conditioning, they can ride all day,” she adds. That said, Marsh Tackies are finely suited to the climate of the Southeast and do best when they remain in their native area.

Many longtime breeders of the Marsh Tacky use these horses for hunting and trail riding, especially where they excel: in the woods and swamps where they developed.

Some owners of Marsh Tackies have competed in trail challenges and done well. Bell describes one owner who has shown her Tackies in halter and western pleasure classes, while another has started her Tacky in dressage. “These horses are very versatile, and could excel in any discipline with proper training,” she says.


A tradition among Marsh Tacky owners is the spring Beach Race, which takes place in March. First run in the 1960s, it was resumed again in 2009. Tackies are raced through the sand for about 300 yards with thousands of spectators cheering them on.

Only about 300 Marsh Tackies exist today. The Carolina Marsh Tacky Association hopes to increase the number of horses to help ensure the future of the breed.

The wild horses of the Carolinas have a fascinating history and are beautiful to behold, but they are also at great risk. In her book The Wild Horse Dilemma, author Bonnie Gruenberg details the history, characteristics and problems facing these wild herds.
“Wherever they roam free on either side of the continent, wild horses are subject to complex environmental, cultural, economic, legal, administrative, political and personal forces,” Gruenberg writes.

Containing maps, illustrations and photographs by the author, The Wild Horse Dilemma provides an in-depth look at the wild horses of the Eastern shore and strives to educate readers on how to help them. Gruenberg describes some of what makes these horses so special while also detailing the hazards facing these herds, including dangers the horses face living so close to humans, such as traffic.

“Wild horses should be honored and cherished because of what they are: tenacious, beautiful survivors who excite and inspire our domesticated souls,” Gruenberg writes. “When we watch them grazing in the marshes or galloping like free spirits from the beach to the dunes, those of us with intact imaginations can feel the spirit of wildness well up in our own souls. For as long as they remain free, so do we.”

Click here for more information on The Wild Horse Dilemma.

Audrey Pavia is a freelance writer and the author of Horses for Dummies. She is based in Southern California. 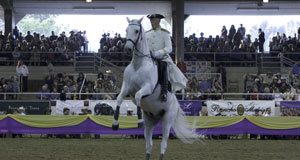 Fiesta of the Spanish Horse