Home Horse Illustrated Horse Illustrated Test Ride: Vaulting
Vaulting combines equestrian sport with gymnastic, acrobatic and ballet moves as vaulters perform leaps, splits and handstands on the back of a cantering horse. Experienced vaulters make it look effortless. However, it’s not easy. Vaulting requires incredible strength and stamina. During my “test ride,” I discovered that I don’t have enough of either of these qualities. I was a ballet dancer for seven years during my youth, so at least I might look graceful up there—I hope I do, anyway. 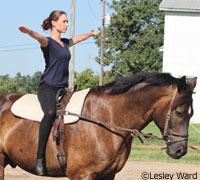 For equestrians from other disciplines who participate in vaulting on a purely recreational level, one of the best advantages of the sport is that it can improve balance, posture and strength in the saddle. Although vaulting at the top levels is done at the canter, you can perform all of the movements at a walk or trot and still reap the benefits. I was completely content to work at these gaits. The slower, the better! Experienced vaulters will tell you that it’s actually easier to perform the movements with the momentum of the canter to help you, but I’ll just take their word for it. Luckily, Pete, the Percheron/Thoroughbred cross I had my lesson on, was easy-going. Pete is an up-and-coming vaulting horse at Dreamfield Farm in Lexington, Ky., where I took my lesson with vaulting instructor Ana Maria Montalvo.

There are several compulsory vaulting movements, including the mount, basic seat, flag, mill, scissors, stand and flank to a dismount. I attempted all of these in my lesson, and some are easier than others. The basic seat is my favorite movement because, in my opinion, it’s the easiest one to look really good at. On the other hand, standing is most difficult for me because all of my muscles freeze—which isn’t good when you’re supposed to be relaxed and following the horse’s movement—and a voice in my head screams, “Are you crazy? Sit down!” It doesn’t help when you’re on a 16- to possibly 18-hand horse.

At the basic seat and stand, I had to hold my arms out to the side like wings. In the correct position, the hands should be held at eye level with the fingers closed and the palms facing downward. When seated, I had to focus on keeping my legs stretched long and pointing my toes downward instead of putting my weight in my heels as I would in the saddle. However, it was still necessary to use my core muscles, seat and even contact with my legs to remain balanced. 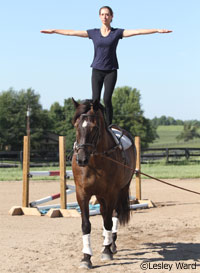 The scissors and flank were very tough because they required a lot of upper body strength to push off the handles and swing my legs and hips up into the air behind me. There was an extra degree of difficulty in the scissors because I had to twist my hips and cross one leg over the other in mid-air so I landed in the basic seat facing backward. Then I had to repeat the same steps (this time swinging my legs up in front of me) to return to a forward-facing position. Going from back to front is much harder!

The goal of vaulting is to move in harmony with the horse, demonstrating grace and fluidity in each movement. While it helps to be extremely flexible, it isn’t a focal point of the sport. This is good news for me. I’m not as stiff as a board, but I won’t be able to stretch my foot to my forehead anytime soon (or likely ever). Nor will I be capable of performing a split across a horse’s back, like U.S. champion vaulter Alicen Divita did so beautifully in her freestyle performance at the 2010 Alltech FEI World Equestrian Games.

If you’re interested in giving vaulting a try, visit the American Vaulting Association online (www.americanvaulting.org) to search for a club or team in your area. Vaulting will give you a new, fun way to enjoy horses and make friends who share your passion.