There’s nothing unusual about me and my 8-year-old Morgan gelding, Majic, crossing creeks, jumping a log, picking our way up a rocky cliff or loping across a grassy meadow. We do these things every chance we get. But it’s downright contrary to my nature to do such things in a competition format and in front of cameras. Yet that’s just what we did this spring when I signed us up to compete in the American Competitive Trail Horse Association’s (ACTHA) contest to find America’s Favorite Trail Horse (AFTH).

On Sept. 13, the AFTH contest will begin airing on HRTV. After each episode, viewers across the nation can vote for their favorite trail horse to move to the top ten. The performances of the top 10 will be shown again in episode 12 so viewers can vote to determine the overall winner. Competitors are vying for a total of $100,000 in prize money, in addition to the title of America’s Favorite Trail Horse.

Like so many horse enthusiasts who tried out for AFTH, I had never competed in a horse event. I rode trails throughout my childhood in the canyon where I lived and then dabbled in cow work and roping, along with the occasional ranch work—that’s the type of riding I’m accustomed to. 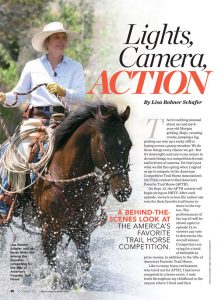 Then I heard about the ACTHA’s idea to shine a spotlight on horses like mine—trusty, good trail mounts—by launching a national search through a contest televised in a reality-TV format. I remember thinking, “Trails are what Majic does best.” I let myself dream a bit, imagining my cute little Morgan finally getting the recognition that he feels he deserves. (He is my complete opposite: a real ham who’s not happy unless he is the center of attention.) I quashed my penchant for anonymity and signed us up for the regional try-out event in Keensburg, Colo. It was one of more than 24 held across the country throughout April.

“The response was unbelievable,” says ACTHA General Manager Tom Scrima. “In the end, we had nearly 1,000 riders and their horses.”

Of the 100 horses chosen to go on to the finals, 50 were picked based on ACTHA judging standards, and 50 were picked because they showed something special the producers wanted to highlight on television.

Competitors were left asking themselves, “Even though I didn’t nail the course, did my horse and I stand out enough to make the producers want to see more?”

As for my Majic, he got his wish and was going to get a chance to strut his stuff for America.

From Concept to Reality

According to ACTHA’s mission statement, their aim includes, “Showcasing the wonderful attributes of the great American trail horse and granting them the recognition they so richly deserve.” Scrima’s vision for the televised contest would further that mission. The aspirations for the series rose considerably when Scrima invited on-camera personality and producer Mark Petersen and his palomino partner, Dusty, to host the show. Petersen is a wildlife behaviorist who has led film crews and researchers into remote areas on horseback to study and film wildlife.

He and Dan Nyberg of Electric Picture Company have produced several programs for national networks, including the History Channel and the Discovery Channel.

When Majic and I and the 99 other finalists arrived at the Franklin Family Ranch near Austin, Texas, on May 8, film crews were already there working with ACTHA staff to establish good camera angles at all of the obstacles and to scope out the trail ride that was to take place on day one. It was quite a sight that included every size of trailer, campers, tents, electric fencing and high-lines. If there was a size or color of horse not represented, I’m hard pressed to name it. In all, 25 breeds came from 36 different states to contend for the $100,000 in prizes to be awarded.

It turns out that Majic and I weren’t the only ones who weren’t competition types; there were plenty of others who up until now had only ridden trails for pleasure. There were also avid competitors, professional trainers, clinicians and folks who were famous enough to have their faces and names emblazoned across the sides of their trailers. We were truly a vast and varied mix of amateurs and elites, with a diversity of horses to match.

And then there were the outstanding clinicians and trainers who were brought in to advise us with inspiring and educational talks, as well as one-on-one coaching following each obstacle: names like Ray Ariss, Lynn Palm, Van Hargis, Aaron Ralston and Monty Roberts.

“Getting so many clinicians together like this was a feat in itself,” says Petersen. “I don’t know how Tom pulled it off.”

When they weren’t sitting in their official coaches’ spot, the trainers and clinicians were extremely generous with their time and expertise. They were approachable and friendly, sitting down with the competitors for the delicious meals the Franklin family served up time and again. Even the things the producers and ACTHA couldn’t control, like the weather, managed to fall in line so that Monday morning, when the contest was set to begin, all was on track for a smoothly run event. Prominent trainers and clinicians were on-hand to give competitors pointers on their execution of each obstacle.

Day one consisted of a six-mile trail ride and included three obstacles where we would be videotaped. Another three were optional, giving riders the choice to head back to the farm rather than risk overheating their horses in the 90-plus degree afternoon. Most of us chose to ride as much of the rugged, beautiful landscape as we could. We rode out in groups of 20, randomly falling in beside someone to chat about our lives and horses. Every so often we’d spy a cameraman crouched down to film us as we passed by.

The first obstacle was a jump—a log about a foot and a half tall that we were to approach and clear at a lope. While I waited to go, I realized this was undoubtedly a unique kind of competition; everyone was supportive of other riders.

“Great job,” “Way to go,” “That’s OK, you did fine,” and so many other words of encouragement followed each try. In this regard, AFTH was a huge departure from any reality TV show I’ve ever seen.

When my turn came, I was surprisingly calm and relaxed. Majic was eager. When we cleared the log and came to a stop, Monty Roberts and Lynn Palm were there to critique us. “Looked professional,” Roberts told me, smiling. That instilled some confidence. Palm added that I should let Majic go and trust him a bit more, advice that really helped me in the following two days.

A water crossing and stepping up and across some large rocks were the other two compulsory obstacles, both of which presented no problems for Majic.

Days two and three took place in an obstacle garden—a grassy area shaded by large trees, with a creek running through it. We had to navigate eight obstacles, some of which were less of a challenge to our horses than the rippling banners and crouching cameramen. I can tell you now that what looks like a simple maneuver becomes much more difficult when you know you’re being filmed, and people are watching and waiting to critique you.

One by one, we each took on the course—first a rock bridge over a creek, canter and jump, stop between two poles, back up a steep hill, walk back to the stream and cross it, pick upa trot and cross raised cedar posts, come to a stop straddling a pole, and finally, sidepass off the pole. After, I listened carefully to Aaron Ralston, who told me I needed to give Majic about two more seconds to think about the rock bridge as he crossed it. And he told me to smile.

“Whatever happens, smile like crazy and act like you planned it,” he said. During my freestyle the next day, I kept his advice in mind. If nothing else, it relaxed me to be riding with a smile on my face.

From Camera to Screen

We made it through the challenges on the trail, but there was one thing left to do—the on-camera interview. I was told it would last 60 seconds and had prepared for that, so when Petersen’s assistant said I had 10 seconds to tell America what’s in my heart, I went blank. There I was next to Petersen and Dusty, camera pointed in my face, and I said something lame like, “Majic and I love America and we hope America loves us. Please vote for 335.”

With that, my part and that of all the contestants was finished, and work for the production team at Electric Picture Company had just begun. They’ll edit the approximately 150 hours of video into 13 one-hour episodes. Then it’s up to you to watch, vote and determine America’s Favorite Trail Horse.

LISA ROHNER SCHAFER is a freelance writer from Boulder, Colo. 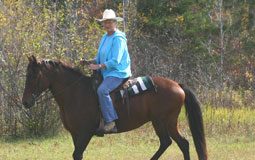