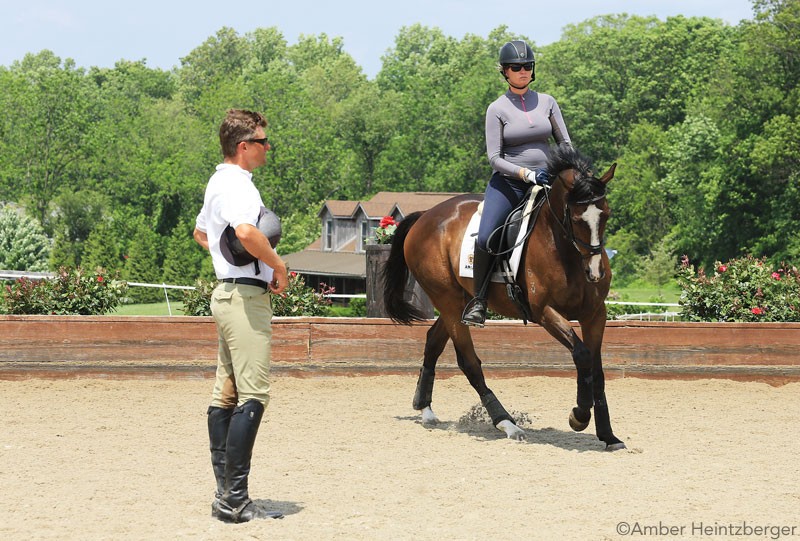 Boyd and Silva help school each others’ horses if they are having a particular issue that can be resolved by the other’s riding strengths.

It’s a typical lunchtime at Windurra. A group of riders stands around the kitchen eating sandwiches while Olympic eventer Boyd Martin leans against the kitchen sink discussing the new George Morris stadium at the Tryon International Equestrian Center in North Carolina. His wife, Grand Prix dressage rider Silva Martin, always elegant and stylish, even several months pregnant, sits at the kitchen island next to George Morris himself, discussing classical equitation and how it applies to both dressage and hunt seat riders.

Windurra is a hub of equestrian activity. It is located in Coatesville, Pa., not far from where Boyd and Silva first started their business out of Phillip Dutton’s True Prospect Farm in West Grove after relocating from Australia in 2008.

The driveway is flanked by trees planted in remembrance of the six horses that perished in the barn fire at True Prospect on Memorial Day weekend in 2011, each one marked with a plaque. As you crest the hill, the farm spreads out with Silva’s tidy dressage stable on the left, all polished brass and well-tended flowerbeds, while the more workmanlike shed row stabling for the event horses is on the right.

“From the very beginning of our relationship, Silva and I realized that we had to be quite separate with our operations if we were going to last,” says Boyd. “Luckily with the farm we purchased, we have a big driveway dividing the farm in two. We have different staff and different hours, separate turnout, and really the only time we meet during our working day is in the arenas.”

Silva agrees. “The only way it works for me is if we don’t work together so much. Our businesses are very separate: there’s a fence in the middle and we have separate staff. We help each other but we don’t work together. I’m German and he’s Australian; I’m tidy and he’s messy. We obviously discuss the important aspects of our horses and businesses, but don’t actually talk about work much when we’re done working at the end of the day.”

Part of this division of labor comes from the differing lifestyle in their respective disciplines, dressage and eventing. “The event horses need to be turned out for longer periods of time and the horses are forever doing something different: fitness, dressage, jumping and so on,” explains Boyd. “The day to day training of the horses is very different, and different things have more importance. The dressage barn has fancy potted plants and the head collars[halters] and lead ropes are tied in a special way, while over at the eventing barn we’re a lot more practical.”

A Day in the Life

On a daily basis, employees, working students and clients go about their business, schooling horses, discussing training strategies, and catching up with other riders. Eventers haul in to school the extensive cross-country course, which includes everything you need from a first-time school to an Olympic prep session.

After lunch, up at the dressage arena, which is flanked by blooming red roses, FEI dressage horses piaffe past as Silva schools Boyd’s Pan-American Games team horse, Pancho Villa, while a group of young dressage horses does trot sets up a hill on the cross-country course.

Eventer Caitlin Silliman started working for Silva in 2008, and then switched to working for Boyd one year later. “I’d imagine a day here is pretty similar to most barns,” says Caitlin. “We have three rotations of turnouts. We get to the farm to feed and bring in the nighttime horses and turn the morning horses out. Boyd and Silva get on right away and start riding around 7 or 7:15. Sometimes they’ll teach a lesson first thing, but usually they start riding right away. I’m on my first horse between 8 and 9 after helping Boyd get on his first horse, turning some horses out and mucking out a stall or two.”

All of the horses work six days a week, and every horse on the farm does some sort of fitness work every day, whether it’s a 40-minute walk or a 20-minute jog.

“We are very fortunate that the caliber of training on the flat at our farm is much higher than at many eventing barns,” Boyd acknowledges. “It’s been a huge advantage for me and the other event riders at our farm to have an expert in dressage keeping an eye on us day to day. On top of that Silva schools a lot of the event horses and gets them ready for big events.”

This works both ways. If a young dressage horse needs breaking or a wild one needs calming down, one of the event crew is quick to throw a jump saddle on and get the horse cantering through the water jump in the cross-country field. “Silva’s dressage horses do trot sets up the hills and a lot of hacking on the roads,” adds Boyd. “There are parts of Silva’s program that are similar to ours. I think our event horses tend to do a lot more flatwork because it’s a high priority at our farm.”

There is a dedicated support team working at Windurra, from riders and working students to grooms and farm workers. “The personalities at our farm can be quite entertaining,” Boyd laughs. “Your standard-issue dressage person is more uptight, while the eventers are more laid-back and enjoy life. The eventing guys seem to loosen up the stiff dressage girls, while the dressage riders class up the eventers. I run the eventing side very much how I learned to train horses in Australia, while Silva’s from the German system and it’s really chalk and cheese; it’s quite remarkable how different the details are.”

All of the riders work hard to stay fit. Caitlin and some of the other employees do CrossFit on a regular basis. Boyd has been injured a number of times, including a broken leg, torn tendon and a broken arm, and he has done a lot of physio for rehab. Even though he hasn’t been injured recently, he goes to his therapist once or twice a week and they stretch him out and do core work.

Silva, who recovered from a severe head injury in 2014 when a horse tripped while schooling at home, (she says her Charles Owen helmet saved her life), works out with personal trainer Linda Brown a couple times a week. Linda’s husband is a jockey, so she knows how to help riders build strength and stretch sore muscles.

The couple is currently expecting their first child. Due in September, as of mid-July Silva is still riding every day, opting for the quieter dressage and event horses and not sitting on the young or wild ones.

“Especially in the past year where I was out with an injury and now with the pregnancy, Boyd has been helping me a lot with the young horses and the ones that are not quite safe,” says Silva. “My balance has been bad ever since I hit my head, but I’m OK on the horses; there aren’t any major changes there. I’m not doing sitting trot anymore, so my horses’ canter, piaffe and passage are getting really good! I’ve also been tired for so long from the healing of the brain, I’m not sure if my energy levels changed very much. I’m feeling much better now though. I’ve been teaching quite a lot because I can sit in the shade and talk with a headset, so I’m probably teaching more than usual.”

To announce Silva’s pregnancy, Boyd posted an ultrasound photo on Facebook, along with a list of names including “Neville Martin” (after his beloved four-star event horse Neville Bardos) and “Spartan Martin,” a joke that quickly lost him any rights to naming his future son, according to Silva. So how will these different personalities handle the shared responsibilities of parenthood?

“I had it in my mind that we could leave the little guy in the tack room and have the working students look after him, but I think Silva wants a well-trained nanny to keep things in order,” jokes Boyd with a wink. “I’m sure our lifestyle will change dramatically once our child is here, but I don’t think it will change our professional performance.” 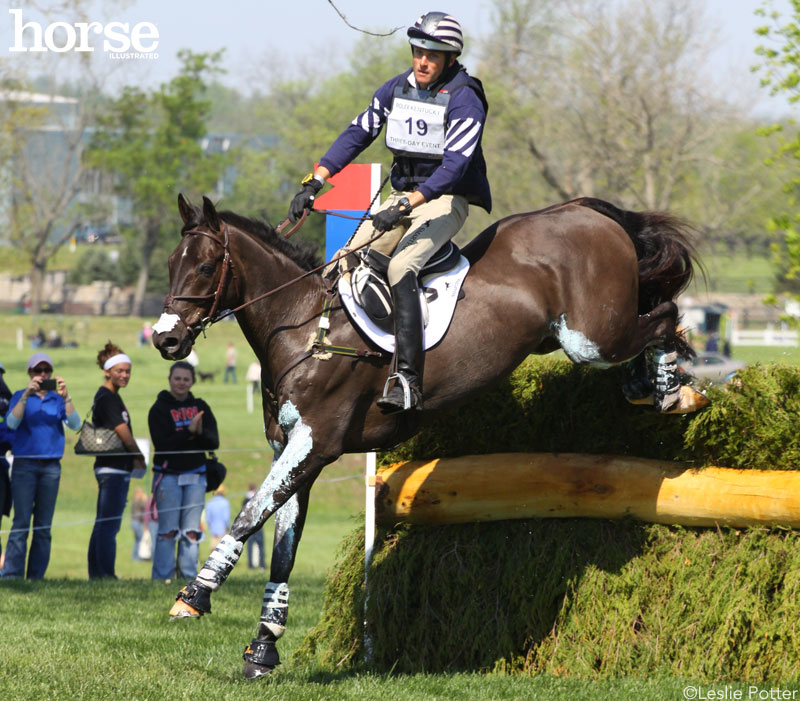 Boyd and Silva agree that the main key to success is getting really good horses into the program and keeping them coming up the levels. “We’ve learned very quickly that to get the really good horses, you have to have an unbelievable support structure,” says Boyd. “It’s something we’re always working hard at, and trying to get new people involved in dressage and eventing.”

Being based in the equestrian meccas of Unionville, Pa., and Aiken, S.C., means they are surrounded by horse people from all walks of life: Grand Prix show jumpers, fox hunters, four-star eventers, carriage drivers, steeplechasers.

Longtime supporter Gloria Callen, who is involved in organizing the Millbrook Horse Trials near her home in New York, explains why she and her husband Craig were inspired to get involved in Boyd and Silva’s program. “Once I started to understand their program, I felt like I couldn’t support one without the other,” she explained. “They make supporters feel like part of their lives, and they’re very genuine about it. They are very cooperative but there are also clear-cut lines of responsibility.”