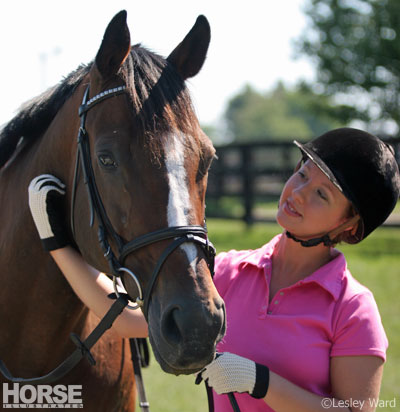 Despite knowing that close relationships among humans are formed over time, it’s fairly common for us to feel disappointed when our horses remain distant after weeks, or even months, of special attention. Horses do form close attachments over time, but we should adjust our expectations and allow them to bond with us at their own pace.

The No. 1 way to establish a close relationship with a horse is to spend time with him in a manner that reinforces you as his leader. It doesn’t matter what you are doing, just that you are there and interacting with him in a way that makes him feel secure.

I’ve owned a Quarter Horse colt named Jackson since he was weaned. Besides handling him morning and evening, I talk to him a lot. While grooming him, or letting him eat “better” grass on the front yard, I’ve filled him in on Kentucky Derby winners, cried over Barbaro’s passing, sympathized with his “picked last in gym” herd status, and generally kept a running conversation. I believe I could talk about hedge funds and Jackson would think all is right with the world.

In many situations, a conversation in the right tone of voice yields better results than a command. When Jackson was 3 years old and being sent to a trainer, he’d been on a trailer only once—the day he came to my farm. The trainer and an assistant came to pick him up and couldn’t get him loaded, so I took the lead rope and coaxed Jackson into the trailer by talking to him as though he was merely standing in the barn aisle. By my calm voice, and the fact I’ve never asked him to do anything that hurt him, I was able to convince him that trailer-loading is no big deal. As I told him, “Heck, if I can get in here, you can get in here.”

One of my “horsey” friends, Lynn DiCello of Salem, Wis., believes my strong connection with Jackson is because I got him at such an early age, before he was spoiled by anyone and lost his trust in people. Lynn believes that a horse has to be receptive or you can try all you want and a deep bond doesn’t seem to form. To develop that deep bond, Lynn says you have to spend time with a horse: feeding, grooming, riding, maybe just sitting out on the grass while he grazes around you. “I think if you are open to a horse, and let him get to know and trust you, bonding will most likely happen,” she says. “You’ll know you are important to him when you go out to the field and he stops what he’s doing, leaves his buddies, and walks over to you on his own.” 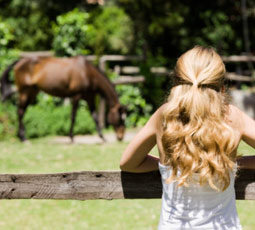 Bonding with The Good, The Bad, and The Ornery

Sometimes, bonding with a horse is so spontaneous, it doesn’t even make sense. You instantly fall in love, and the horse, sensing it, responds in kind. How do you know? Well, it won’t be like it is in the movies and television shows—your horse won’t run to get help if you fall off and can’t get up. He’s more likely to run away!

You’ll know when his eyes soften when he looks at you, he tries to groom you when you’re within reach, he whinnies when he sees you (and it’s not time to eat), he turns to you in a crisis, he follows you around, and he quiets when you talk to him.

My first horse, Presto, was my once-in-a-lifetime horse. He was so beautiful that people always made a fuss over him, but he was also generous and forgave my many beginner-rider mistakes. Presto was a big, spirited Morgan, and way too much horse for me from the outset, but I was determined to ride him. Over the years, we became such partners that I could think “move there” and he would, or I’d put a hand on his neck and he’d visibly relax. We were like that mythical creature, the centaur—half human/half horse. Not all my horses have been that into me. A few were ornery and others indifferent even though I’ve treated them all the same. A few years ago, I bought a horse named Bud for trail riding. His previous owner must have had a “if they don’t ask, don’t tell” policy because she neglected to detail the horse’s “playful” side.

Working with Bud was like the proverbial box of chocolates—you never knew what you’d get. I never had the sense that he was a bad horse; I thought he was “naughty.” My husband couldn’t grasp the distinction. Perhaps I am perverse, but I sort of enjoyed Bud’s Jeckyll-Hyde personality. It was a challenge to try to figure out what he’d do next. Whatever tricky thing Bud did, I could almost feel the joy emanating from him. He entertained himself with his plots.

Bud and I bonded by coming to an understanding: If he’d keep his shenanigans to a minimum, I’d cut him some slack.

Then, there are those horses that try oh-so-hard to resist me. I currently own a big bay gelding named, fittingly, Rex (which means “King”). He has so much pride, and such a strong sense of self, that he rarely lets down his guard. He’s like the love interest in Bruce Springsteen’s song, Secret Garden. There’s a place where he won’t let me in. If I pet him, he moves away. If I approach him with a treat, he’ll lean, lean a little more, and practically fall over before he takes a step toward me. He expects me to serve him. I might take this personally, but I spoke with Mary Ann Collins, of Racine, Wis., who owned Rex from the ages of 3 to 14 to see if she’d managed to get closer to him. She said her relationship with Rex was better under saddle than on the ground.

“Rex was always workmanlike and responsive when I rode him, but he was somewhat aloof otherwise,” Mary Ann said. “I think horses’ ability to bond with people has a lot to do with how they are handled as babies. The horse I own now, Declan, was imprinted at birth and our relationship is so close, it’s almost spiritual. It was not immediate though; I had to earn his respect and it took time. I attribute much of our special bond to natural horsemanship and how much time I put into groundwork.”

So, it seems Rex has been consistent throughout his life and simply has a self-oriented personality. Even so, he slips up now and then by forgetting to act like he merely tolerates me and nuzzles my shoulder while I groom him. I don’t gloat, however. It’s important to him to feel like “The Man” around the place, and I’m content to know he sometimes gives himself away.

In January 2007, Rex really gave it away. That winter, I suffered two strokes. When I got home from the hospital a month later and started visiting the barn, Rex knew something had happened to me and now looks out for me the way old geldings often shepherd foals. 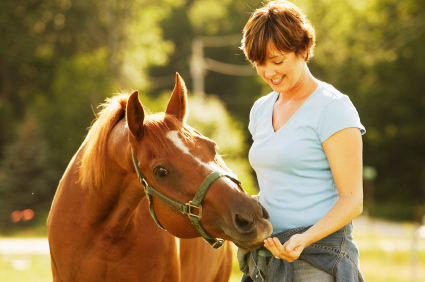 Who says food isn’t love? Horses love food and we love giving it to them, but your pure intentions could create a monster. Treats are fine in moderation. Just make sure you decide when and where to give them.

How to feed treats is a matter of some controversy. Hand-feeding is heresy to some horse owners and standard practice for others. Some hand-fed horses will begin to nip and root around for treats, so owners need to correct this behavior before it becomes an ingrained habit.

Horses have an uncanny ability to size up the people around them, and they often take advantage of permissive owners. For example, if you let a horse take a few steps as you mount, he is leading and you are following, albeit on one foot. If you allow a horse to push ahead of you when you lead him, he’s actually walking you. Horses are genetically wired to test you, so it’s in your best interests to always set limits.

Punishment is a key issue literally defined by setting limits, yet is difficult for some owners to mete out even when it is justified. All horses require a reminder of the limits at some point; if the reminder is fair and warranted, they do not resent it and won’t hold it against you. You’re merely reminding them that you’re in charge and not to forget it.

Why Bonding is not PsychoBabble

Some people may think “bonding” is borderline touchy-feely psychobabble that isn’t necessary as long as a horse does what he’s told. This might be true in a majority of cases, but there can come a time when friendship and respect make the difference between a close call and a tragedy.

One August morning, Presto got out of his pasture when a painter left a gate open. By the time I found my horse, he was buried up to his shoulders in a muddy, boulder-filled riverbed. Even though Presto had already suffered enough neurological damage to die several days later, I’ll never forget how hard he tried to pull free when I encouraged him. He fell back numerous times before he finally lunged up the steep bank onto dry land. Presto followed me back to the barn through a 7-foot high cornfield with his nose pressed against my back.

You should try to build a relationship with your horse that is strong enough to compel him to try his hardest for you, whether it be in a World Championship class or in a muddy creek. Perhaps you have a new horse that you want to be able to catch in a large field, or a new trail horse that will take you long and far … you never know when you’ll need to draw upon that “bond equity.”

Further Reading
Equine Emotions
Getting a Rescued Horse to Trust You

A freelance writer who works from her small farm in Wisconsin, Louann Chaudier has formed a tight bond with all her horses, dogs, cats and wallabies.

This article originally appeared in the 2009 issue of Horses USA.

The Bond Between Mare and Foal