Home Equestrian Lifestyle How I Got My Start: Gina Miles

When Gina Miles was presented with the individual silver medal in three-day eventing at the 2008 Beijing Olympics, she was a long way from her humble beginnings at the Happy Horse Riding School in Davis, Calif. So how did a barn rat from a non-horsey family work her way to an Olympic podium?

“My mom grew up reading The Black Stallion books, so I got my love of horses from her,” remembers Miles. “I was always staring at horses in fields and begging for lessons.”

When Gina was 7, her mother signed her up for six lessons at the Happy Horse Riding School.

“Although the school wasn’t involved with United States Pony Club, it ran a Pony Club-like program,” says Miles. “I spent the next six Saturdays at the barn. In each three-hour session, we’d have a horse management lesson, a vaulting class and a riding lesson.”

Gina soon became a regular pupil at the Happy Horse Riding School, but she longed for a mount of her own.

“When I was 10, my dad called and announced, ‘I bought my daughter a pony!’” says Miles. “He had bought a pony for $75 at a Boy’s Club auction. My mom wasn’t thrilled. She knew buying a pony at an auction wasn’t the best way of getting a horse. 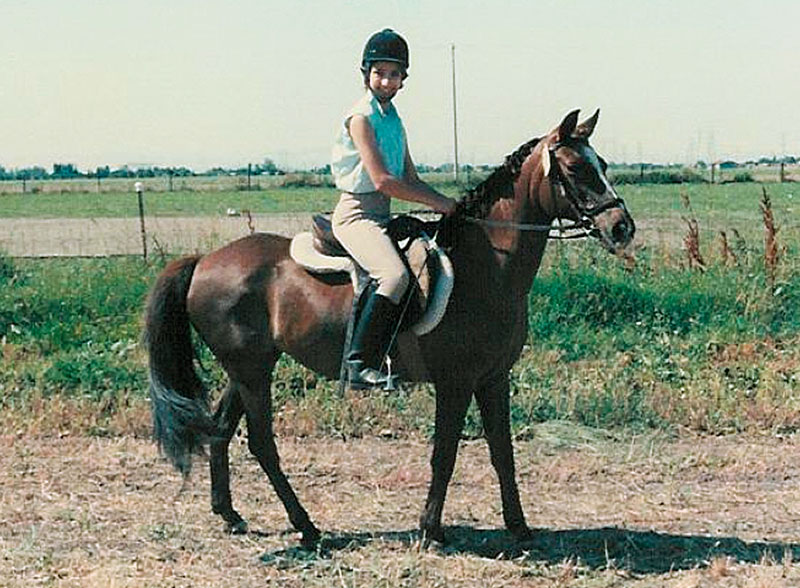 “Lily was a fluffy chestnut pony,” continues Miles. “She was probably around 20. She could have turned out to be the pony from hell, but I got lucky. She was scruffy, but safe.”

“I kept Lily at a [small] stable that I could get to on my bike,” adds Miles. “It was self-care and cheap. My mom was a single parent with two kids—and she was going to law school. There wasn’t a lot of money for lessons. I was left to my own devices.”

Inspired
In 1984, Gina’s mom scored tickets to the dressage competition at the Los Angeles Olympics.

“When we got down there, we bought tickets in the parking lot for cross-country day,” remembers Miles. “We didn’t have any idea what eventing was. As we watched the horses galloping by, I became totally enthralled by what I saw. I knew right then that I wanted to go eventing, jump cross-country jumps and ride at the Olympics!
“When I got home, I read articles in horse magazines about how to teach a horse to jump, and I started jumping Lily bareback,” continues Gina. “I took her to small hunter shows and jumped in 2’6” classes. I also began doing Training Level dressage.”

Lessons Learned
Gina spotted her next horse at a show. An Arabian named Sir D’Artagnan, he had been ridden in a clinic taught by Jimmy Wofford, a renowned eventing trainer, so Gina figured he would make a fine three-day eventer.

“Dar probably dumped me 100 times, and he ran away with me constantly,” remembers Miles. “He also refused cross-country fences, but I didn’t give up. I took him to our first recognized event at Wild Horse Valley Ranch in Napa, but I really didn’t know what I was doing. I saw people putting fancy coolers on their horses, so I grabbed a beach towel with Miss Piggy on it and put it on him. We were truly bargain-basement eventers!” 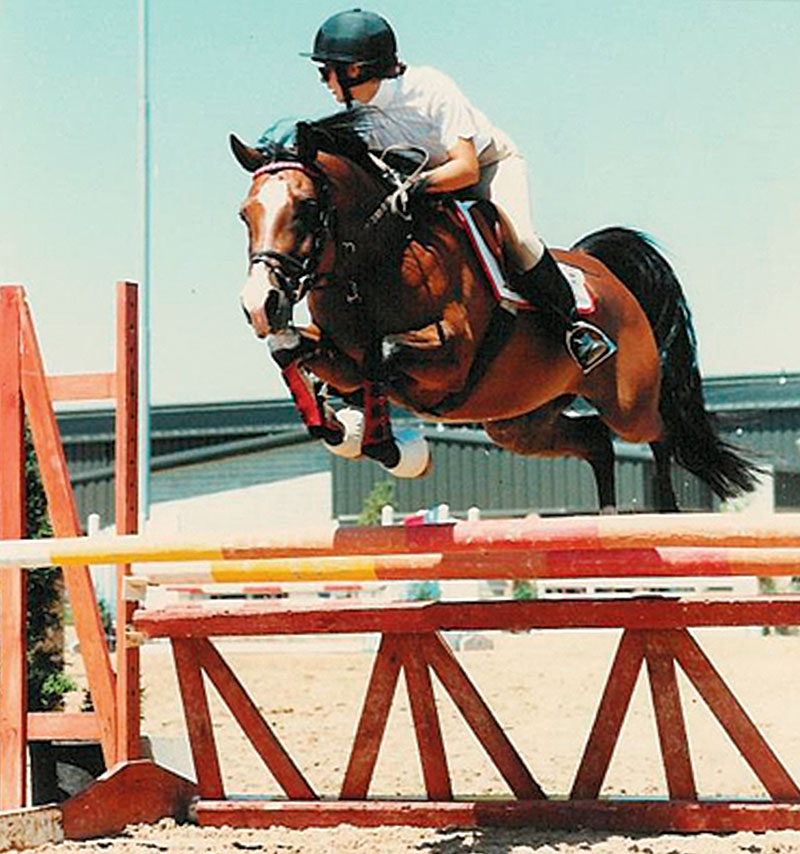 Gina and Dar were successful at the Novice and Training levels, and the plucky pair eventually entered a Preliminary level event.
“We got through the dressage and the show jumping, but luckily my mom was smart enough to not let me go cross-country,” says Miles. “I think Dar could have gone farther if I had been more educated or had taken more lessons.”

Paying Dues
By this time, Gina was about to enter college but took a year off to be a working student for eventer David Adamo. “It was hard work and long hours,” she says.

When Gina headed to college a year later, she took a few horses with her.

“I went to California Polytechnic State University in San Luis Obispo and got a degree in crop science with a minor in agricultural business,” says Miles. “I had no intention of working with horses after college.”

But horses kept Gina going while she attended Cal Poly. “I needed money to pay for school,” she explains. “I paid my way by teaching lessons, instructing at Pony Club rallies and riding other people’s horses. I also bought and sold horses to make money.”

During this time, Gina rode with Brian and Lisa Sabo. Under their tutelage, she achieved her Pony Club A rating and a sixth-place ribbon at the 1993 North American Young Riders Championships.

Dreams Do Come True
Gina’s big break in the eventing world happened after college when she and her husband, Morgan, were hired to manage Rainbow Ranch, owned by Thom Schulz and Laura Coats of Creston, Calif. Thom was an eventer, and Gina exercised his horses.

“Thom and Laura had eventers, jumpers and dressage horses,” says Miles. “I went to shows with them a lot, and in 1997 we attended the Rolex Kentucky Three-Day Event as spectators. As we walked the course, it brought back the memories of Los Angeles and my dream of competing in the Olympics. It was the first time I had told Thom and Laura of my goals, and they were surprised.”

After Rolex, Thom and Laura traveled to Ireland to go horse shopping. When they were shown McKinlaigh, a leggy 5-year-old Irish Sport Horse, they saw his potential and bought him. 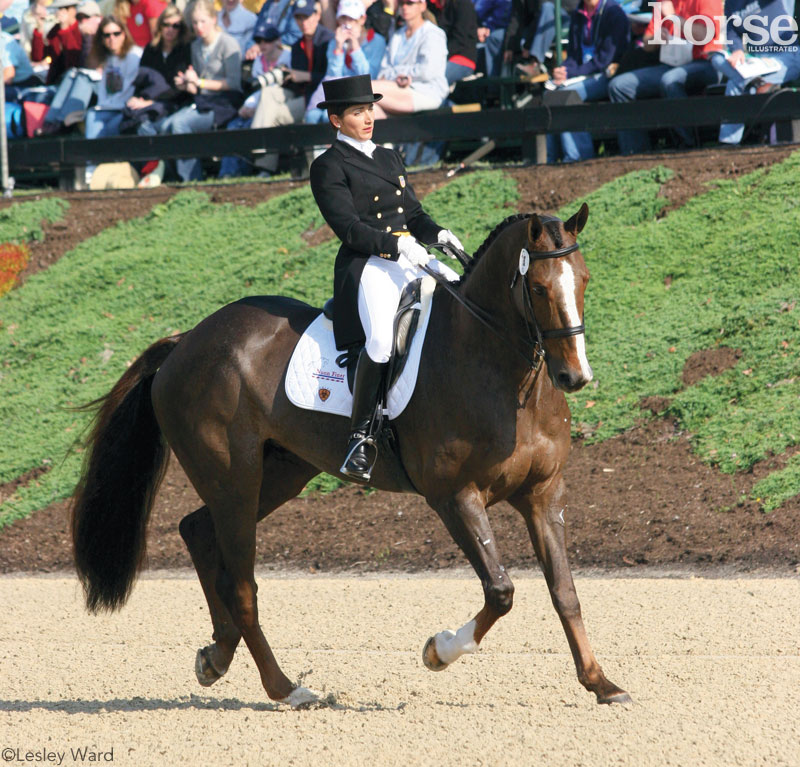 Gina and McKinlaigh at the Rolex Kentucky Three-Day Event.

McKinlaigh arrived at Rainbow Ranch a few weeks later, and Thom and Laura quickly realized that their talented 17.2-hand liver chestnut gelding might be the horse to help Gina achieve her Olympic dream. The rest is history! The pair won a bronze medal at the 2003 World Cup Final and a team gold and individual bronze at the 2007 Pan American Games in Brazil before flying to Hong Kong in 2008 to claim their Olympic silver medal in the individual eventing competition.

McKinlaigh is currently enjoying his retirement at Thom and Laura’s Rainbow Ranch.

Today and Tomorrow
Today, Gina runs Gold Medal Equestrian, a three-day eventing and sporthorse training barn in Templeton, Calif. The barn is also home to a riding school and the Gold Medal Equestrian Pony Club.
“I really enjoy educating the next generation,” says Miles. “I love helping them achieve their goals.”

When she’s not teaching at Pony Club rallies, schooling sale horses and traveling around the country to hold clinics, Gina’s an active competitor, showing at all levels of eventing.

Miles has big plans for her Advanced-level horse, S.V.R. Ron, a Thoroughbred gelding. She hopes to take him to his first three-star event this year if all goes well.

“Ron is a superstar cross-country horse, but he needs plenty of work on his dressage,” says Gina. “It’s great to have him to compete in the upper levels, but I’m also excited about a youngster I have named Cantalli Di Revel. He’s a 7-year-old Hanoverian gelding out of a Thoroughbred and by Contucci, who is by a Trakehner sire, so he has plenty of ‘blood.’”

How does Gina fit everything into her busy life?

“Sometimes it seems like I’m running around with my head on fire; I’m doing so many things,” admits Gina. “But I have a fabulous family I love, so that helps. My husband drives the truck to events; my son, Austin, jump judges; and my daughter, Taylor, is mad crazy about her Shetland cross, Snoopy.”

LESLEY WARD is the Editor in Chief of Horse Illustrated and Young Rider. She lives on a farm in Kentucky with her three horses.

35 Things We Love about Horses