I’ve developed somewhat of a reputation as ‘that pony rider.’ Izzy, my partner of four years, is a large pony mutt. Being fun sized or vertically challenged or however you nicely want to phrase ‘short’, I always end up on sale ponies and schooling naughty lesson ponies. However, I have always loved thoroughbreds.

I love my pony. She is beyond fantastic. But she is just that: my pony. After talking to some close friends and having it pointed out to me that there will never be ‘the right time’ and that therefore I might as well just give in already and take the plunge I began my casual search for an OTTB. I just didn’t think I would find one so quickly. 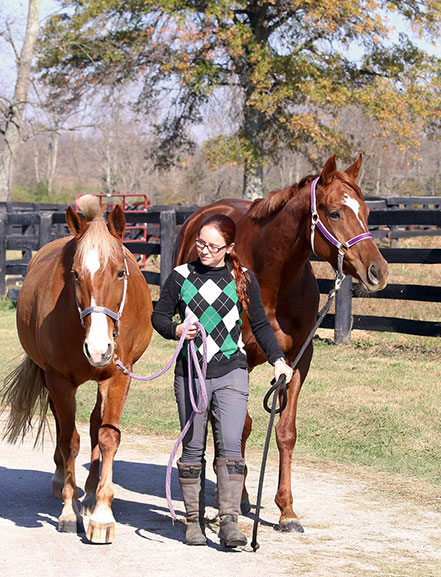 An OTTB might be just as big of a leap as you could possibly take from a little round pony.

It started with a little bay mare. Amy Paulus of Paulus Racing and Performance Thoroughbreds posted her on Facebook and I spent a good while staring at her. But attempting to be rational I made myself wait. I didn’t want to jump on the first prospect that crossed my path.
That night Paulus posted another mare named “Sweet and Classy.” This one was chestnut, four years old, considerably taller than I wanted. In the 36-second clip it was clear she had potential. She was spunky and lifting through her back, had natural hock action to die for and as cliché as it sounds I simply had a really good feeling about her. 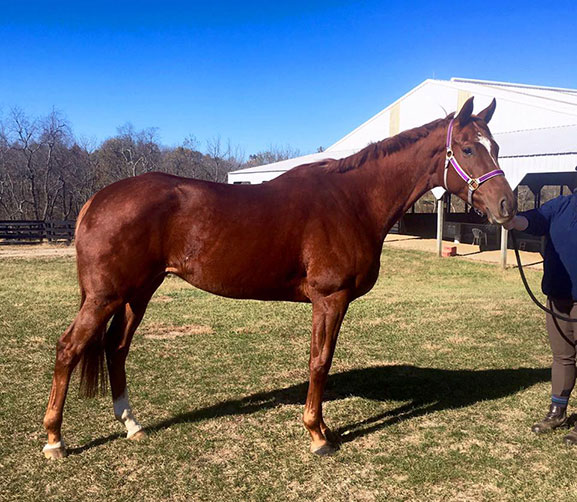 I enlisted the help of Jenn O’Neill. Having successfully restarted countless thoroughbreds I was comfortable that if she thought this mare was the right choice that I would be confident enough in my decision. She assured me that it wasn’t entirely stupid (because let’s be honest- buying a second horse was definitely a little ‘stupid’) and all of 60 hours later we drove to Turfway Park to meet the candidate in person.
By this point I already had a name picked out and a virtual shopping cart full of goodies for her. I had a friend pick a name since she had me help with her own horse’s name and I couldn’t come up with anything that fit. She picked Ria, short for Sangria. It fit, given her Jockey Club name “Sweet and Classy.”


When I bought my pony four years ago I didn’t take the most logical approach. She was cute, had a personality, and when I sat on her I essentially thought, “Well, I can work with this” and signed the check. It was similar with Ria. Paulus introduced us, jogged her, let us run our hands over her, and it simply felt right.
To be safe, I opted to have her looked at by the track vet before officiating the sale. Even he commented how floaty her trot was, especially given that she had a workout on the track just the day before. Feeling as confident as I ever would about taking the OTTB plunge Ria was officially mine and we were on our way home (with a second horse for Jenn in the trailer, because that is apparently what happens when you go to the track). 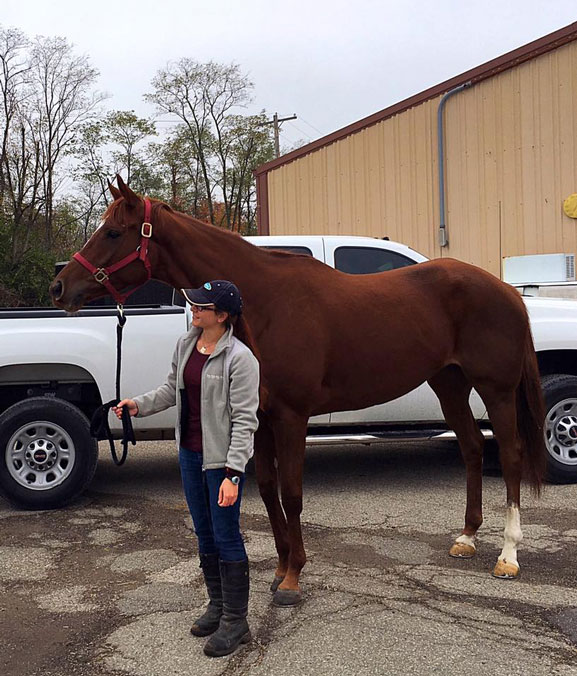 Picking up Ria at Turfway Park.

I opted to turn Ria out right away partially because I didn’t think far ahead enough to prep a stall for her and also because I wanted her to finally get some true outside time. I put my pony in a paddock next to Ria’s so that they could be friends over the fence without the risk of something quickly going wrong. Watching the two meet and walk on opposite sides of the fence together was comical. There were no squeals or mareish nonsense. Alternatively, they provided some exceptionally cute photo moments. They got turned out together a few days later with absolutely no qualms. 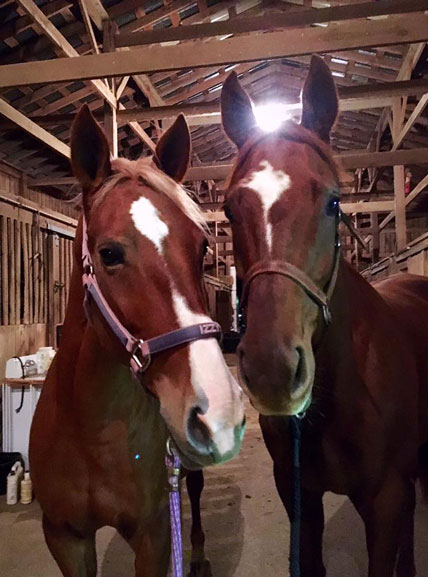 
The farm isn’t the least spooky place for a baby horse. The covered arena has mirrors, a speaker system, lights that click on, and the jump field is full of coops, zebra striped fillers, and a fake mulch ditch. I opted to just go for a hand walk on day one with Ria. She barely glanced at the mirrors and the fake ditch that definitely startled my seasoned pony was simply a new object to investigate and she put her nose right on it with no hesitation. Not wanting to push my luck, I kept it at that for the day.


On day two I decided Ria should learn to lunge. I didn’t teach my pony to lunge when I first got her and paid the price later when I decided that as an 8 year old it was time for her to learn. One of my main goals with Ria is to take the lessons training Izzy has taught me and not make the same errors again. Again, I was impressed. After just a couple days Ria was listening to voice commands and actively looking to me for what to do next.


I told myself that I would wait to get on Ria. The plan was to sit on her once before visiting my family for Thanksgiving and then pick her back up in December. But if the adventure so far with Ria has taught me anything about myself it’s that I am not a patient person. And so after a brief lunging session a week after Ria came home, I ended up hopping on. Whoops?

My good feeling about the chestnut mare I saw posted on Facebook was right. The brain was there and so was the natural movement. The first ride simply went so well. Her canter to the right wasn’t the prettiest (turning…turning…we turn now…) but we got it done. She listened and was willing the entire time.

Ria’s fourth ride off the track.

Ria now has fourteen rides on her and has gone from anxious in the crossties to falling asleep while I groom her. There is improvement every ride. Of course, some days are better than others. But so far there has only been one truly ‘baby’ moment where Ria forgot where her feet were while turning at the canter and hopped a few times to get her legs back under her. It was comical to say the least. She also wasn’t so certain about the other horses coming towards her in the arena mirrors the first few times she was worked with other horses in the ring.

All horses have their own personalities, and Ria was fast to show me her’s.

I’ve been focusing strongly on Ria’s flat work. I have jumped her twice (the first being somewhat spontaneously in a dressage saddle), but I am keeping the fences to a minimum until she sorts her body out on the flat. Perhaps the coolest thing with her is just how much she has improved in such a short amount of time and how she is starting to ask me questions and wait for the answers. There really is just something about a chestnut mare; while they may have their own special kind of sass, when they start to work with their person, everything just seems to click.

Since 2010, the Retired Racehorse Project has been working to educate the equine community about Thoroughbreds and promote the breed as the perfect sport horse choice after they are finished racing. While participating in their annual Thoroughbred Makeover wasn’t my main motivation for getting Ria, I did take her on with the intention of applying to participate. The first round of acceptance letters were sent out on Dec. 16, and my name was on the list. Essentially, this means that over the next nine months Ria and I will be working towards an invitation only international competition held in Lexington, KY at the start of October. We are able to pick up to two disciplines in which to compete and while I am leaning towards dressage and a yet-to-be-decided second choice I am waiting until Ria shows me where she shines brightest before I make the decision. 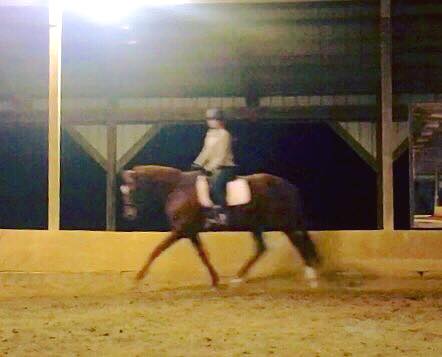 I’m beyond excited to see what this not-so-little mare can do. Somehow I just have an inclination that she may turn into something very special. 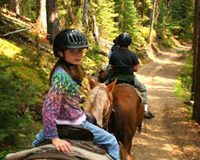