Jean Abernethy’s first horse was a grinning, buggy-eyed stick horse. She remembers being disappointed when she unwrapped “Charlie Horse” because, as she says, “This was not the black stallion who danced in my dreams.” But she eventually learned to love him, big eyes, toothy grin, and all.

Those who know the grown-up Jean’s equine creation Fergus the Horse can perhaps see some parallels to the Charlie Horse of her childhood. Both represent the ubiquitous “everyman’s horse”— with the faultless honesty and inherent imperfections we love despite spooks, spins, ducks, bucks, refusals, unplanned dismounts and direction reversals, not to mention bills that a horse can rack up.

Jean sketched throughout her youth, and the subjects of her illustrative meanderings were most often horses. At college, initially she planned to major in equine studies, but the drive to draw was such that she made a switch to majoring in art while selling her work freelance on the side, steadily developing clientele and a collection of general-purpose horse comics.

“These generalized horse comics could be more widely distributed,” she explains. “I made an effort to keep my drawings from being pigeon-holed in any particular segment of the horse industry.”

A Star is Born

Out of these comics trotted a single recognizable character—and Jean sensed that her growing audience was hungry for a name. “Fergus”—with a horseshoe for the “u”—was officially born in 2000, and it wasn’t long before a host of support characters spilled out of Jean’s ballpoint pen.

Combining handmade artwork with computer-generated techniques was a skill Jean acquired over the years, and her artistic talent, wit, and ability to keep pace with technology meant that it was only a matter of time before the world discovered Fergus.

Currently, Fergus the Horse has more than 300,000 Facebook fans, his own website, and a Twitter profile. His popularity is impossibly huge; the little cartoon horse is a bona-fide celebrity. And for Jean, creating his adventures as well as “managing” his stardom is a full-time job—almost.

A Couple of Characters

“Working on material for Fergus fills most of my days and weeks now,” says Jean. “I also illustrate books for other authors and for periodicals. In addition, this is my third summer working at South Algonquin Trails, a trail riding outfit on the edge of Algonquin Provincial Park near Harcourt, Ontario, Canada.”

Jean’s little buckskin mare, Willow, a registered half-Arabian, goes with her on the job as part of a team of guides who escort groups out on the logging trails. Their duty is to keep everyone safe, including many inexperienced guest riders.

“Depending on the size of the group, we need guides in front and back, and for a larger string of horses, a guide in the middle,” Jean explains. “We make sure riders stay centered in the saddles, teach them how to guide their mounts, and keep all the horses moving along as they should. We sometimes have to act fast and ‘contain the angst,’ as I like to say.

“Willow is a horse who really needs a job. She has settled into this work beautifully and seems to understand that ‘horse politics’ is not appropriate when we are working. I’m very proud of her. In my opinion, characters—both human and equine—blossom out on the trail.”

Upon returning to her studio this fall, Jean has found herself in the midst of promoting the publication of her first Fergus book, a comics treasury.

“For 30 years, people have asked me to create a ‘funny’ horse book,” says Jean. “So the publication of The Essential Fergus the Horse treasury is a dream come true! And it’s not just to satisfy Fergus’s Facebook following—there are a lot of people who aren’t on social media. This book can bring Fergus to them.”

So what’s next for the world’s most popular cartoon equine and his horse-crazy creator?

“As an artist, I’d like to see Fergus animated,” Jean admits. “He’s so much fun; it would be grand to see him moving. As an equestrian, well, I’d like to travel more. Fergus connects me to a lot of fun-loving horse people. I feel like there are many new friends out there that I would very much like to ride with.” 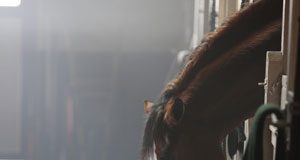 Super Bowl ad to feature the iconic Budweiser Clydesdales and a...