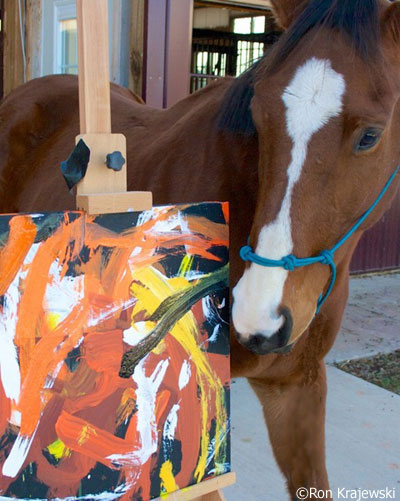 Off-the-track Thoroughbreds are fortunate to have rescues across the country fighting to help them transition to new careers as show and pleasure mounts. Ex-racehorses are competing in the English and western show arenas, enjoying the trails, and even … painting? Well, at least one increasingly famous ex-racer is. Meet Metro Meteor.

Metro was a successful turf sprinter who won eight races and $300,000 in purse money during his four-year career. But chronic knee issues brought it to an end. He had already undergone two surgeries to remove bone chips, returning to racing after each, but eventually his knees forced him into retirement.

Ron and Wendy Krajewski owned small percentages of a few racehorses, including Metro, through a partnership with Renpher Stables. When they heard that Metro needed a good home, they offered to adopt him.

After nine months of vet care and rehabilitation for arthritis, carpitis, floating bone chips and ulcers, Ron was able to take Metro out on light trail rides. The gelding received injections and supplements to maintain lubrication and flexibility in his knees, and wore wedge shoes with pour-in pads. But after two years, Metro started growing bone in his knees. The vet said he had another couple of years or so before they would lock up completely and he’d have to be euthanized. His trail riding days were over.

“Metro has osteoarthritis (degenerative joint disease) in his knees,” says his vet, Kim Brokaw of Walkersville Veterinary Clinic. “The carpus [knee] is a high-motion joint. When the space fills in with bone, there is pain, inflammation and progressive loss of range of motion, with the horse eventually losing ability to flex or fully straighten his knees.”

Although Metro couldn’t avoid the deterioration in his knees, one thing remained constant: his personality. Strong-willed, stubborn and cranky, he would pass the time spent in his stall by hanging his head out and bobbing it up and down. And although Ron says that Metro is obedient and will do whatever is asked of him, the gelding does it on his own terms: only after getting in a few head bobs first.

An Artist is Born
A painter by trade, Ron wondered if he could put Metro’s quirk to good use by teaching him to hold a paintbrush. He started by training Metro to touch a canvas with his nose, rewarding him with a treat each time. Next, Ron would offer Metro the paintbrush, then take it from him and give him a treat whenever the gelding held the brush in his mouth. When Ron put the two skills together, Metro applied the paintbrush to the canvas on his own. Then it was just about adding some color.

“Metro works in acrylics,” says Ron, who paints animal portraits in watercolors. “Watercolor is a more precise medium. Abstract art works best with acrylics or oils, but oils can be toxic. Acrylics are nontoxic and fast-drying, so they’re suited to Metro a little better.”

Ron was pleasantly surprised by the quality of Metro’s first painting, and that’s when the light bulb went off. He wondered if selling Metro’s works of art could help offset his increasing vet bills.

When Metro’s first two paintings sold quickly and he made the front page of a local newspaper, Ron saw the bigger picture: Metro could also help other ex-racehorses. Since then, Ron and Wendy have been donating 50 percent of Metro’s profits to New Vocations Racehorse Adoption Program.

“Since we started painting in December [2012], Metro has raised more than $40,000 for New Vocations,” says Ron. “He donates about $4,000 a month. New Vocations recently established a Metro Fund; they have stalls at their Pennsylvania facility dedicated to Metro Fund horses, and the horses in those stalls are 100-percent funded by Metro.”

The Logistics
Like any artist, Metro has his own studio, known as Studio 6 around the barn. The owner of the farm where Metro lives set aside stall 6 specifically for his gifted ward. “We covered it in canvas and he’s got an easel in there,” says Ron, who adds that Metro will also paint in the indoor arena or outside when TV crews visit.

Metro paints for 45 minutes to an hour about three days a week to prevent him from getting burned out, but he seems to enjoy his new career. “He paints at liberty; there’s no lead rope attached to him,” says Ron. “He can walk off and go graze, but he never does. He always chooses painting over everything else, so I think he really likes it.”

A Bright Future
Metro has also been able to return to light riding, thanks to his Tildren treatments. The intravenous injections treat bone and cartilage changes like those seen in navicular disease and bone spavin. Currently experimental for use in cases such as Metro’s, the injections have slowed the bone growth in his knees and given him some flexibility again. “They are working much better than expected,” says Ron. “His vet has retracted that two-years-left [prognosis], and he is getting around as good as, if not better than, he ever has.”

To help offset the cost of Metro’s high vet bills and donate to the New Vocations Metro Fund, you can purchase Metro’s paintings through his Facebook page, in the “Available Paintings” photo album. Eco-friendly totes and pillows featuring his works of art can be purchased at
www.dreamgreenusa.com. Learn more about Metro at www.paintedbymetro.com. 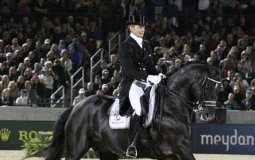