In September 2014, the second annual Ultimate X Showdown in Ohio gave barrel racing trainers a chance to showcase off-track Thoroughbreds (OTTBs) in a somewhat unexpected sport. Each trainer selected a horse with no training outside of the racetrack and had 100 days to work with him before the event. Devised by Jacqueline Harris, the Ultimate X Showdown consists of two timed barrel runs and a freestyle performance resulting in a final score. Of 40 applicants, 15 were selected to attend the event. This year, Nicole Valeri and her horse No More Rings were convincing winners of the $5,000 first-place prize. 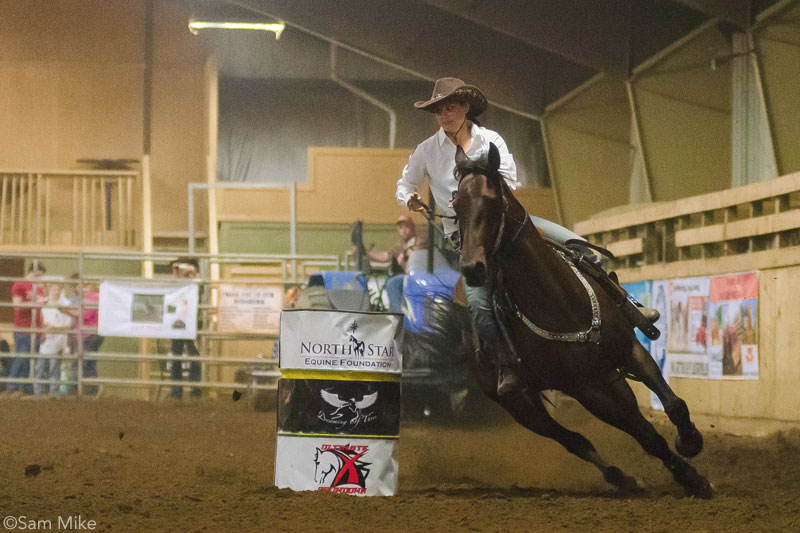 Once I found out I was selected to participate in the Ultimate X Showdown, I made arrangements to meet with a few trainers to see their available Thoroughbreds at Mountaineer Racetrack. No More Rings (aka “Rings”) happened to be the first horse I looked at, but he was not the last. He was obviously a spirited horse, as one might expect of a racehorse. He was also extremely sensitive and wasn’t very keen on me touching him anywhere or picking up his back legs. He would twitch and squirm and even threatened to kick. It made me cautious of him at first, so I checked out a few more horses. However, I was drawn back to him because of his fiery personality. He also had the perfect conformation to get around the barrels, so I decided to take the risk and brought him home.
Once home, I found that he hated to be brushed. He refused to stand still and would try to kick me. He also would not pick up his back right leg, and it took us forever to get to the point where we could put shoes on him. I’m not sure why he had these quirks, but they were definitely challenges you don’t face every day.

Despite his idiosyncrasies on the ground, Rings always rode pretty nicely. His only real issues under saddle were with other horses riding around near him. He would get hot and try to take off, especially when standing at a barrel race watching the other horses run in and out of the chute. It took a lot of hauling, time and patience before Rings realized he didn’t have to race anymore and could stand quietly while the others ran.


He still has the competitive spirit though. Even today he will give other horses nasty looks and get a bit on the muscle if they get too close or try to pass him, but he is worlds better! Rings was always a challenging horse to work with, having many quirks and a huge personality, but come competition time at the Ultimate X Showdown, we were working as one. He was warming up great the day of the competition, and I knew he was really going to work for me and put it all together.

He won the first round of barrels Thursday night, and it gave me a huge confidence boost that I greatly needed because I was so anxious and scared. I really think Rings must have done all the work, because I was too nervous to ride as well as I can! But he took care of me and I was pleasantly surprised.

Friday during the big show, he was excellent again, nailing his freestyle and taking home another go-round win in the barrels. I was really thrilled with him because I had never asked him to run so hard at the barrels before, and even in practice he had still been making a few slip-ups here and there. But I had no complaints after that performance!

Rings is a top-notch competitor and has a huge heart. He really is a very special horse to me. After working with Rings, I have purchased two other Thoroughbreds to retrain as barrel horses as well. The whole experience has been eye-opening, proving that OTTBs can really perform well as barrel horses and are excellent prospect choices.