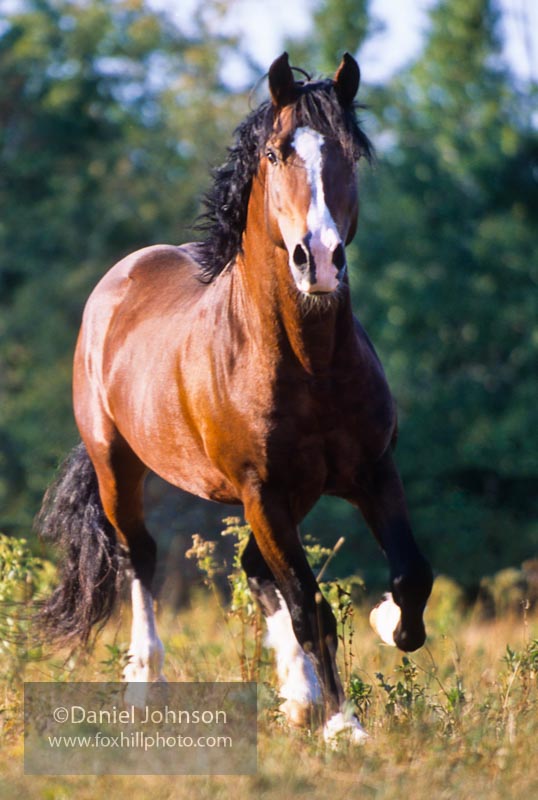 Everything about him seems impressive. He’s a Welsh Cob (section D) stallion—strong, robust, and athletically built. He has the most amazing, floating trot. In the spring, his bay coat blossoms with dapples, and during the summer his long black mane blows in the wind. He has amazing bone and four whites. Even his name is impressive: Orion. It’s as if he’s trying as hard as he can to make you think: “Wow! What a strong, brave stallion!”


What Orion doesn’t want anyone to know is that he has one weakness.

He’s a little-bit of a scaredy-cat.

Little things bother Orion. He doesn’t like water dripping off his tummy after a bath. He doesn’t particularly like going through doorways. And he really, really doesn’t like the Old Picnic Table by the Tree.

The Picnic Table is Orion’s “favorite” thing to be scared of. It wouldn’t be a problem, except that it’s right on the way to his pasture, so he has to walk by it twice a day. It’s been there for years—maybe longer than Orion’s lived here—but that doesn’t matter. No matter how many times he walks past the Picnic Table, it’s always scary. He’ll shy away from it; he’ll lift his head and stare at me as if saying, “You’ve got to be crazy! We can’t walk past that!” Orion must think it’s haunted by little plastic-bag-waving spooks. And while I sometimes suspect he “pretends” to be afraid of the table just for fun, there’s no doubt it really does frighten him at times.

Whenever Orion sees something “scary” he starts to make little low, half-blowing sounds, as if he’s one step away from sounding the equine “blowing alarm,” but he never quite goes that far. He expresses his fears quietly, just to me. Perhaps he just doesn’t want anyone to know that such a big, strong guy is afraid of anything.

Sometimes, on a fresh morning, if Orion is being particularly silly about the Picnic Table, I’ll try to talk him out of it and firmly say, “C’mon, you’ve seen it a million times. Let’s go…” But that doesn’t seem to work very well—Orion just insists that the Picnic Table is terribly scary (it’s always scarier on windy, wet, fresh mornings). So usually I just try to calmly reassure him. “It’s alright, you’re okay, let’s just walk past it…”

Maybe in some ways, we’re all a little like Orion. Maybe we all have a silly fear that everyone else would laugh about. I know the picnic table isn’t a big deal, but to Orion, it is.

So when Orion trots up and down the pasture, putting on a “big-strong-stallion” show, I don’t mention the scary Picnic Table to the mares. I just let him trot around, saying, “Look at me! I’m a big tough guy!”

Daniel Johnson is a freelance writer and professional photographer. He’s the author of several books, including How to Raise Horses: Everything You Need to Know, (Voyageur Press, 2014). Dan’s barn is home to Summer, a Welsh/TB cross, Orion, a Welsh Cob, and Mati and Amos, two Welsh Mountain Ponies. Follow him at facebook.com/foxhillphoto.