Congratulations! The stick turned blue. And you have a jump lesson on your young horse tomorrow and just sent in your (ridiculously expensive) entry fee for the championships next month. You feel fine. Your show clothes fit. Nothing looks different, but the universe has tilted. So what do you do?

Yes, everyone knows (and will tell you all about) someone who rode until they were 41 weeks pregnant, had the baby without drugs in the back of the horse trailer, and won an event three weeks later. But what’s right for one woman is not right for all. Stances on riding while pregnant vary even among individual medical professionals, but the official recommendation from the American College of Obstetricians and Gynecologists is pretty clear: Better safe than sorry.

Read more on both sides of the riding-while-pregnant discussion >> 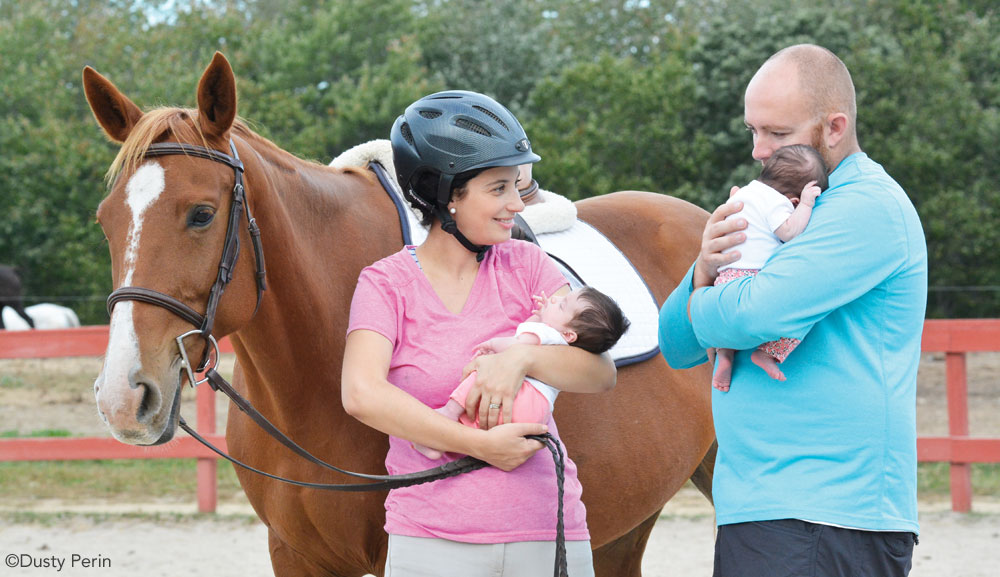 Carl A. Dunn, M.D., is a chief of obstetrics and gynocology in Waco, Texas. He also manages a family horse farm. “The safest riding while you’re pregnant is no riding,” he says. “That’s something a lot of people don’t want to hear. I’ve been riding my whole life, too, and I know every time I fall off, I’m sure it’s the last time—until it happens again.”

For those whose livelihood depends on interacting with horses on a daily basis, he recommends scaling back, even limiting activities to ground work if possible.

There’s no period during pregnancy when riding is officially “safe,” but Dunn says the risk increases significantly after approximately 12 weeks, when the uterus begins to rise up out of the pelvis and is no longer protected by its bony cradle.

For many horsewomen, riding is as much a lifestyle as an activity. Dunn says there’s no reason to avoid horses or barn time entirely, as long as standard safety precautions are followed. “We sometimes get relaxed around horses we know, and that’s when accidents occur,” he says. “With anything you do, there is a degree of inherent risk. It comes down to your tolerance for risk, knowing that you’re carrying another life with you.”

Ladies: It’s your call. You know your body, your health, your riding ability and your horse better than anyone. Talk to your doctor, and make the best choice for you and your baby. And if someone else doesn’t make the same choice you did (or think you would), it’s really none of your business.

Eventually your show clothes will stop fitting. And, for some odd reason, they don’t make maternity breeches. In the later months of pregnancy, the expanding uterus can begin to crowd your lungs, making even simple tasks seem daunting. At this point, pushing the wheelbarrow, chasing the naughty pony, calling a dressage test, or simply leading the horse might require a break to catch your breath.

As you approach the end of your pregnancy, your body will start to produce a hormone called, appropriately, relaxin. Its purpose is to soften muscles and the cartilage of the pelvis and sacroiliac to enable them to flex, for obvious reasons. This can lead to pain other areas as your joints start getting a bit loose. If you haven’t stopped riding yet, now’s the time to take a break.

What Comes After Baby

Congratulations, Mama. You made it to the big day. Depending on how delivery goes, your recovery will vary. Those who had Caesarean sections will need extra time to bounce back. But generally, even a healthy, natural birth requires about six weeks of recovery time. Along with stitches and other unpleasant realities of childbirth, Dunn explains that the softening effect of relaxin doesn’t immediately reverse itself after delivery.

“The pelvic area will remain soft until about six weeks postpartum,” says Dunn. “Some people want to go back to riding sooner, but I don’t recommend that. If you want to get on and walk or jog slowly, you’ll probably be OK. But you don’t want to gallop or jump.”

Rushing it could cause joint movement, or even a separation of the bones. “It takes much longer to recover from that,” says Dunn. “You’re better off waiting until the cartilage gets back to its normal stiffness to keep that joint stable.”

You’ll also find that any abs you may have previously possessed have now stretched into a generalized midriff mush while everything gradually realigns. Getting into sitting-trot fitness will take some time. Your body just produced another human. Cut yourself a break if it takes a while to get back to equitation shape.

One area that may benefit from the new mom regimen is your arms and shoulders. A baby doesn’t seem particularly heavy until you’re carefully carrying it around for 18 hours a day. Do that for a few months, and suddenly a horse that’s heavy in the bridle will feel like a lesson pony.

Even after the initial saddle-arrest term has been lifted and you’re cleared for riding, there are a couple new things to accommodate in your equestrian pursuits.

That laxity mentioned earlier also applies to breast tissue, so support takes on a whole new meaning. If breastfeeding, your breasts will be larger and heavier, and their internal ligaments will be weaker than usual.

“The breast itself has very limited intrinsic support,” explains Jenny Burbage, Ph.D., MSc, BSc (Hons), FHEA, a senior lecturer in the Department of Sport and Exercise Science at the University of Portsmouth. Her primary research area is breast biomechanics and breast health.

“Natural breast support relies on the delicate structures of the skin and the Cooper’s ligaments, which are a functional component of the breast that separates the milk ducts and isn’t designed to provide this support.

“Breasts will be changing size during pregnancy and lactation and are more prone to being uncomfortable,” Burbage adds. “Exercise is still very important during these stages, but you will need to manage the breasts to allow you to do this. Therefore it is even more important to be wearing a supportive bra, but also one that fits. It may be that you need more than one size of bra to suit your breasts at this time.”

Planning your riding times strategically around nursing can help to reduce the overall weight of the breasts and associated need to contain movement.

“Pump right before you ride and put compression on,” advises Dunn. Keep the area as dry as possible to prevent yeast infections on the skin. “Riding for an hour and then taking off the compression isn’t going to create a problem for most people.”

As much as we’d like to think having a child won’t slow us down, a safe pregnancy and healthy baby does usually require scaling back equestrian pursuits, at least temporarily. But in just a few months, you’ll be back in the saddle and already shopping for ponies.

Erin Hsu is an equine-industry digital marketer living in Georgetown, Ky. She aspires to dominate the local leadline circuit with her Norwegian Fjord and daughter, Rowan.