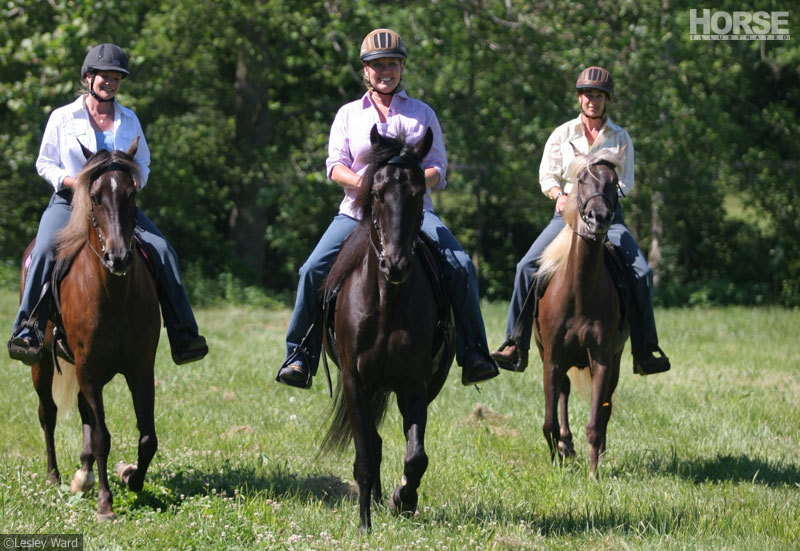 The majority of the women who board their horses at the Gemini Performances Horses farm are on the knowing side of 50. Most are returning to equestrian sports after raising their families and growing their careers. All want the physical and mental benefits that the sport provides.

“If I’m going to exercise it’s going to be this way,” says Helen Yakin-Palmer. “Besides I’ve wanted to do this for a long time; this works for me.”

According to a 2015 survey of horse owners, Yakin-Palmer is not alone.

Prepared by the University of Kentucky’s Department of Agricultural Economics for American Horse Publications (AHP), the survey revealed that women over 40 are becoming involved in equestrian sports in significant numbers. In fact, of the 11,307 people polled, more than 92 percent of respondents were female and more than 63 percent were 45 years of age and older. In addition, more than 70 percent of responders regularly used their horses to pleasure ride, while more than half viewed their horses as performance partners and nearly 25 percent used their animals for lessons and training.

Anecdotally, women frequently become involved in equestrian sports later in life when they have the time and resources to afford the activity. Others ride or own horses in order to realize a childhood dream.

Whatever the reason, Dr. Naomi Betesh, DO, says the physical benefits of equestrian activities are significant.

But there is more. Betesh began riding at the age of 42 when her teenaged daughter took up the sport.

Since then she has gone on to ride four times a week, and spends lots of leisure time attending horse shows with her daughter.

”It’s really nice to spend time at the barn and go to shows together,” Betesh says.

She says the barn time is a stress reducer too.

“Although I do check the phone frequently in case there is an emergency, I put the phone down – being at the barn is a distraction from stresses at work and at home,” Betesh says.

But reducing stress in not the only mental benefit rides get from spending time with their horses, says Joan Carroll-Cronin, a certified mentor in sports psychology for equestrian athletes who began riding at age 59.

According to Carroll-Cronin, equestrian sports are unique for the personal sense of esteem and accomplishment they engender.

“Equestrian sports offer the opportunity to reach a potential and create order,” Caroll-Cronin says. “And no other sport helps you focus – to cultivate awareness.”

In fact, though many older equestrians do compete, they are more likely to focus on performing at their personal best.

“Winning is not the goal,” Caroll-Cronin says.

Whether for exercise, stress reduction, or to enhance personal relationships, Betesh believes all older riders bring a certain amount of fear to their saddle time. That’s partly because adults worry that an injury will sideline them from a job or prevent them fulfilling other personal responsibilities. Even so, fear of injury ought not prevent older riders from becoming involved with the sport.

“If you are in good health, age is not a limiting factor to trying something new,” Betesh says. “Riding has many great physical and psychological benefits; the key is being realistic about your riding goals, and taking it slowly.”

Patrice D. Bucciarelli is a veteran
journalist who covers a range of equestrian lifestyle topics. When she’s
not working, Bucciarelli unwinds with her Tennessee Walking Horse,
Santino.