Looking for something new in the world of equestrian sports? Something challenging? Fun? Something described as “fast, furious, and very skillful”? Consider the sport of scurry driving, an equestrian competition uncommon in the U.S. but gaining steady footing (hoofing?) across the pond in the U.K. and Europe. Curious? Read on.

The sport of scurry driving is essentially summed up as a pair of ponies pulling a small cart around an obstacle course as fast as they can. Although scurry driving started in the U.S. in the 1950s as primarily an end-of-event entertainment at a horse show, when it reached the other side of the Atlantic, equestrians thought it suited for competition and developed it into a sport of its own right. In 2001 the Scurry Drivers Association was formed in the U.K. Its popularity continues to spread; scurry driving has also recently become a recognized equestrian sport in New Zealand.

Currently, there isn’t an official American scurry driving association. Instead, local U.S. driving competitions will host informal scurry driving events for fun and practice, sometimes referred to as the American Scurry Challenge. These frequently are not held to the same rules and regulations as their British counterparts.

A scurry driving team consists of a pair of ponies, a four-wheeled cart, and two people. Competitions are sometimes divided into different classes based on pony height, so those taller than 14.2 hands can also usually participate. The team driver sits at the front of the cart and the second person sits at the back, proving ballast around tight curves. This position is called the groom. As the team swings around a sharp corner, the groom leans off the side of the cart, preventing it from tipping over. 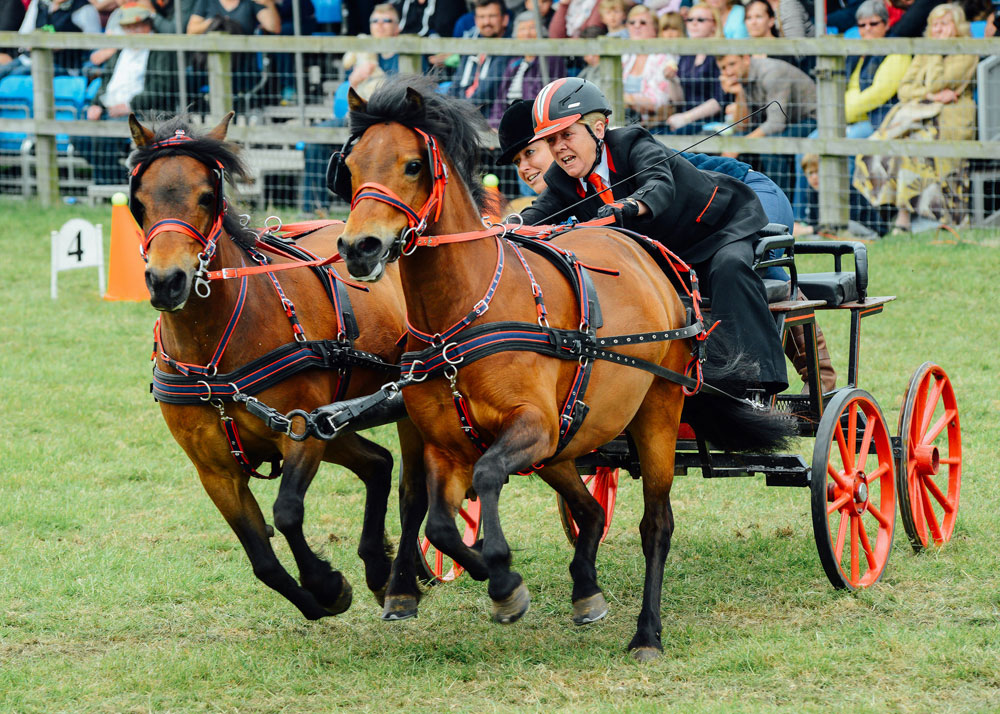 Scurry Driving by Adrian Snood via flickr/CC BY 2.0

Each team races the course one at a time. The course usually consists of ten to twelve obstacles, which are cones with a ball on top. The team’s goal is to make it around the obstacle course with the fastest time. The team is penalized with added time for each ball that is knocked down, meaning a turn was taken too closely and a cone was nudged. Like a show jumping round, speed is important, but not at the sake of sloppiness. A balance between hustle and precision is the winning mix.

Sometimes, scurry driving courses will also involve a slalom or a set of obstacles in the shape of an “L”, “U”, or “Z”. Again, the team who makes it through the course with the fastest time and fewest penalties wins.

Any age driver can participate, making this sport a fun family event. Depending on the event, there are variations to the two-pony-four-wheel rule. Some events feature a single driver in a two-wheeled sulky pulled by one horse.

Other than the sheer excitement of the sport, the pony names are fun, too. Often, the teams are named for famous (or infamous) pairs such as Prim and Proper, Bonnie and Clyde, Fast and Furious, Chicken and Dumplings—you get the idea. Exciting for the drivers and thrilling to watch, maybe scurry driving will be featured at a show near you soon!

Anna O’Brien, DVM, is a large-animal
ambulatory veterinarian in central Maryland. Her practice tackles
anything equine in nature, from Miniature Horses to zebras at the local
zoo, with a few cows, goats, sheep, pigs, llamas, and alpacas thrown in
for good measure.