Home Equestrian Lifestyle Should You Ride While Pregnant? 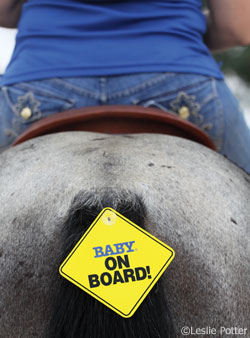 When British Olympic eventer and member of the royal family Zara Phillips announced her pregnancy this summer and said she would continue riding professionally for as long as possible, she kicked up a worldwide debate. Should she ride? Is eventing too dangerous for pregnant women? And what about Phillips’ fall at the Barbury International Horse Trials just days before her announcement?

It wasn’t long before the Queen’s granddaughter decided she would take a hiatus from competing, citing that her horses had already qualified for their 2014 outings. But the debate continued to buck on both sides of the pond: Should women ride while pregnant?

For some, the answer to that question is loud and clear. For others, it’s a new and confusing course to walk. No matter what a woman chooses, her decision is often subject to criticism.

From eventing to reining, we see professional female equestrians carrying on with their riding careers throughout their pregnancies. British eventer Mary King won team gold and individual bronze at the 1995 European championships while secretly five-and-a-half months pregnant. Dutch dressage rider and Olympic gold medalist Anky van Grunsven competed at the 2004 Olympics in the heat of Athens while she was four months pregnant. American Olympic show jumping star Laura Kraut rode until she was four months pregnant with her son.

Why did Kraut stop riding? “I became uncomfortable mentally,” she says. “To miss five or six months of riding really wasn’t such a big deal in the grand scheme of things. I felt that if I continued to ride I was adding risk, and I didn’t want that responsibility.”

Meghan Michaels, an FEI-level dressage competitor based in Point of Rocks, Md., rides at least seven horses a day, six days a week. Not much changed while she was pregnant with her son.

“I saw three doctors from the same practice,” says Michaels. “They all told me to keep riding.”

Michaels rode horses she was familiar with, avoided green horses, and stuck to a walk/trot/canter routine. “I felt confident with the horses I had in training while I was pregnant,” she says. “Throughout my pregnancy, exercise made me feel better. I never felt off balance.”

She did, however, quit sitting the trot after her bump emerged. And by the time she was eight months pregnant, her dismounts were far from graceful.

“Life is dangerous in general,” says Michaels. “I’ve been riding since I could walk. I had to keep going for my own brain. It’s what keeps me ticking; it’s my passion.”

While for some women riding during pregnancy is as natural as breathing, others believe that it’s wrong. “Putting your child’s health and safety first, not to mention your own, while you’re pregnant is a small price to pay for the amazing reward of having a child,” says Lynn Miles of Lexington, Ky., who has evented up to Intermediate level. “It took two years for me to get pregnant, and I suffered one loss during that time. With everything it took to get there, I would never have taken the risk.”

It’s a very personal decision. But Miles wonders if women who choose to ride while pregnant would be able to forgive themselves if something happened. Would riding for a few extra months really be worth it? “Everyone has the right to make their own decision, but remember that you’re making a choice not only for yourself, but also for that unborn baby who has no say in the matter,” she says.

Marnye Langer from Burbank, Calif., grew up around horses, riding many types of horses in a variety of disciplines. She shows in amateur owner jumpers and serves as a United States Equestrian Federation judge in hunters, equitation and jumpers. When she decided to become a parent, she had a lot more experience with horses than with babies. “I had a doctor who was very open-minded,” Langer says. “Her advice was that if a woman participated in a sport prior to pregnancy, then it was OK to continue through the first trimester, unless it was skydiving.”

But Langer, well aware of the unpredictable nature of horses, wasn’t convinced. “Several years before getting pregnant, I had a freak accident,” she recalls. “Walking out of the lineup after winning a flat class on a very reliable horse, I fell off. I hit my head and was unconscious.”

When she woke up, Langer remembers being asked repeatedly by the horse show medic, the paramedics and the hospital staff if there was any chance she was pregnant.

When deciding whether or not she’d ride during her pregnancy, Langer read extensively about fetal development. Her decision? Not to ride until after she delivered her baby. Instead of riding, she worked with her horses on the ground.

“Some of my peers laughed at me, but I am glad I made the decision I did,” Langer says. “Bad things can happen. I was not willing to accept a risk that was too great.”

Shéne Dozier Allen, M.D., understands firsthand the love of horses and the hard decisions that come up when an equestrian is pregnant. A lifelong rider and mother of four, she’s also an obstetrician/gynecologist who has equestrian patients. During her own pregnancies she worked with her horses, but not in the saddle.

“Staying in shape while pregnant is important,” says Allen. But she cautions that the number of physiological changes that a pregnant woman’s body experiences, such as the changes in blood volume and the cardiovascular system, can lead to sudden episodes of dizziness and fatigue. Changes in your breathing cause you to lose more moisture and can lead to dehydration, shortness of breath and worsening heat tolerance, she says.

Because of these changes, Allen recommends that her equestrian patients not ride while pregnant. “I have had all kinds of riders, from trail riders to professionals who do it for a living, and I have yet to have one person argue with me on this topic.

“In my opinion, it’s too much risk for too little gain,” she adds. “It’s a short time to stay off your horse and protect your baby. It’s hard to justify any added risk. If there is any negative outcome in a pregnancy, a woman immediately starts blaming herself, even if that blame is irrational. Most women want to know that they gave their baby no reason to be anything but perfect.”

On a personal note, one month after I found out I was pregnant for the first time, I was on an airplane to Ireland for a thrilling week of cross-country jumping. Canceling the long-planned trip was out of the question; at 32, I felt young and strong, and I figured being 10 weeks along wouldn’t change a thing.

That was naïve. The first change of plans involved swallowing my pride and requesting a sturdy beginner horse and avoiding the slippery banks, cavernous ditches and gaping tiger traps that my friend sailed up, down and over. My own restraint surprised me. Still, I loved my scenic treks through those green fields of the Emerald Isle.

At home a few weeks later, I was trail riding with a friend when I got royally bucked off my large and very green warmblood.

Afterward, I was tense, not springing back to the saddle like I had in the past after a fall. I had bruised my rear and my confidence. I also experienced an emotion I had never associated with horses: fear. Had I hurt my baby? Should I not ride while pregnant? How could I tell my husband, whose suggestion to avoid riding while pregnant I had handily ignored?

A few days later, a routine checkup confirmed that the baby was fine. But the incident had given me a wake-up call. My boots stayed at the back of the closet for the rest of my pregnancy, and when I was pregnant again three years later, the boots went away again. It wasn’t long after each pregnancy before I was back in the saddle.

There’s no easy answer to the question of whether or not to ride throughout your pregnancy. It’s up to each expectant mother to talk to her health-care provider and weigh the risks. Pregnancy is a wonderful and fleeting time to enjoy, whether you’re in the saddle or standing on your own two feet.

A freelance writer and children’s author based in Washington, D.C., KITSON JAZYNKA contributes regularly to Horse Illustrated. Her horses enjoy the good life in nearby Potomac, Md.