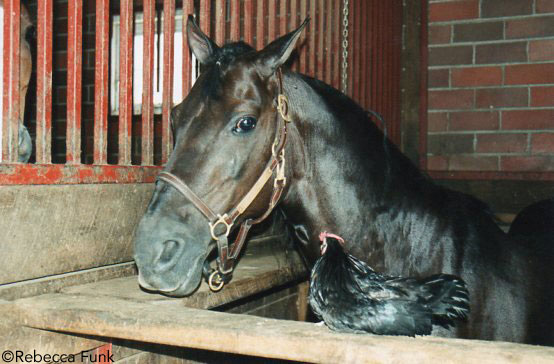 Just before my senior year of college, some of the students at the barn had an animal communicator come out to talk to the horses. There were a few good stories that came out of this experience, but the one that stood out was that of a little Morgan gelding named John. John told the animal communicator that at his old farm, he’d had a chicken. He said he missed his chicken, and asked if he could have one.

Deciding there was nothing to lose, the professor in charge obliged, and soon John had his own chicken named J.C. (for “John’s Chicken”). John seemed thrilled to have that chicken in his life. As a skeptic, I’d like to say that this was an odd and lucky shot in the dark on the communicator’s part. I’ll never know for sure. Unfortunately, J.C. wandered into a neighboring stall one day, and the resident horse did not share John’s affection for fowl. J.C. got trampled, and while he did survive the ordeal, it was decided that he should retire to the safety of a student’s family farm. Poor John was left chickenless once again.

You probably know a few horse owners with similarly entertaining anecdotes about an animal communicator knowing something she just couldn’t possibly have guessed. Although horse people tend to be pragmatic, the desire to know what our horses truly think and feel about their jobs, their lives, and us is pretty strong. When someone suggests throwing a barn party and bringing out a horse psychic, even the most skeptical among us is usually game to try it out, if just for a laugh.

But is there any reality or value to be gained from employing the services of an animal communicator, or is it akin to hiring a magician for your kid’s birthday? It wouldn’t be hard for an observant person to come out, tell a horse owner what she wants to hear, feed off her reactions to vague statements, and put on a pretty good show, no psychic powers necessary. Then there’s the flip side. What about when the psychic tells you something you don’t want to hear? 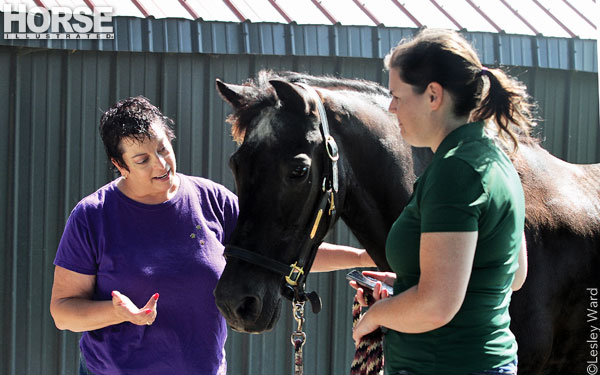 What Does the Horse Say?

When my riding instructor announced that there would be an animal communicator at the barn’s Christmas party last winter, I was curious to see what it was all about. Latifa Meena, a Louisville-based animal communicator who lists appearances on MTV and Call of the Wild on her résumé, came out to the farm to provide some insights about a few of the animals. While speaking with a friendly old Golden Retriever, she mentioned to his human that he would be “crossing” (dying) within the next year. I didn’t know the dog personally, and I thought I was a complete skeptic, but I found myself quite upset by this. If that were my dog, I thought, I wouldn’t want to know about any crossing. I’d want to remain blissfully ignorant. And sure enough, I found out that he did “cross” a few months later.

I had that in mind when I contacted Latifa this summer to have her chat with my Morgan gelding, Snoopy. He’s still a pretty robust guy, but at 26, he’s slowing down and has some age-related wear and tear. I tried not to focus on that. After all, there are a lot of other things I would like to know about Snoopy. Is he happy with his current job of light hacking, or is he bored? Would he rather be retired completely? And why won’t he ever let anyone catch him in the pasture?

Nevertheless, when Latifa first asked if I had any questions, I went straight to my worries and asked how he was feeling physically. She reported back that he had good days and bad days, and that sometimes his feet hurt. He’d had some issues with hoof soreness in the past, so this wasn’t a surprise. But Snoopy’s question in response was unexpected.

“He’s asking, ‘Why is she asking me that? Do I have a disease?’” Latifa told me. I told her that he didn’t. “He thinks it’s neat that you’re concerned about him like that,” she replied.

And with that endearing remark, I was hooked. I was ready to set aside my skepticism and hear whatever my beloved horse might have to say.

Snoopy is generally a happy guy, it seems. He wanted to know why he had new pasture buddies and some of the old ones had left—a common occurrence at our busy boarding barn. But he reported being happy with his current friends and with everyone at the farm. Then I asked about his habit of evading capture.

Horse people will often say that horses are happier with a job, so I asked what Snoopy would like to be doing with his golden years.

“He says, ‘I’m retired! I make great yard art,’” Latifa reported. “He’s happy. He doesn’t really need a job, per se. He says you still kind of trail ride a little or farm ride. Is that true?” I told her that it was. “He says, ‘That’s OK. We can still do that.’”


Unlike that Golden Retriever at the Christmas party, who seemed to casually drop the bomb that he’d be crossing soon, Snoopy asked it if was OK to talk about that. I said it was, and braced myself.

“He says he loves you very much,” Latifa told me. “He knows that you’re going to see him through until he leaves. He doesn’t have any intentions of going anywhere at the moment. The way he puts it to me is that when his time comes, he’ll get down and he won’t get back up. You may get a phone call or something that he’s down. ‘Right there, put a needle in,’ he says. ‘Let me cross right then and there. I don’t want any lifesaving [expletive deleted].’

“From his point of view, he doesn’t have a time he’s leaving yet,” said Latifa. “He might be 32. His lifeline is really strong. He’s not bored or anything. ‘Retirement’s cool!’ he says. ‘This is fun.’”


I know what you’re thinking. It wouldn’t be that hard to make all of this up and have it resonate with just about any senior-horse owner. But there was one, “she couldn’t possibly have known that” anecdote I walked away with.

“There’s a smaller red roan female hanging around the farm somewhere,” Latifa said. “He likes her! I’m not sure he gets to be in the pasture with her, but she’s next to him or something. He likes her a lot.”

At a farm populated largely with bay Thoroughbreds, there is a red roan pony who happens to have the stall next to Snoopy’s. But at that moment she was turned out in the mares’ field all the way across the property, out of sight. Lucky guess? Maybe, but you still have to wonder.

Skeptics are part of the job when you work as an animal communicator. In fact, Latifa started out as one.


“I rode Quarter Horses and competed on the circuit for many years,” she explains. “At one point I had a horse who was having some problems, and somebody in the barn told me, ‘You should have an animal communicator come and talk to your horse!’ And I said, ‘You’re so full of you-know-what!’”

But with nothing to lose, Latifa decided to give it a try.
“I found [a communicator] and brought her to the barn, and this lady knew things she could not know,” says Latifa. “She knew stuff about all of the horses, and it just pulled the rug out from underneath me.”

The communicator explained to Latifa that anybody could learn how to communicate with animals, but it took a few years for Latifa to gain the confidence to do it professionally. She had been working as an IT trainer and engineer, traveling to different companies to train their employees on using their networks. She would sometimes walk by an office and see a photo of someone’s pet on the desk, and the animal would start talking to her. So when she found herself unemployed in 2006, she realized she had the opportunity to pursue a new calling.

Latifa often advises people to talk to their animals and says that they will understand.

“Humans deal in a verbal world; we talk to communicate,” she says. “Animals are used to it. They can communicate telepathically with each other. But they’re so used to human interaction being verbal that they understand every word you say. That doesn’t mean they don’t have selective hearing, but they do understand.”

When animals communicate with Latifa, she says their information comes to her in a variety of ways.

“I feel what they feel,” she explains. “They show me pictures. I hear things. I can smell things sometimes. It’s an intuitiveness. It’s just listening and allowing the info to come in so the message becomes as clear as possible.”

Latifa’s personal story is compelling, and as she was “talking” to Snoopy, I realized I was willing to believe everything she was reporting to me, at least in the moment. Am I still a skeptic? Yes, although I’ll admit I now find myself doing some of the things she told me Snoopy wanted me to do: Telling him about what’s going on in my life or letting him know exactly how many days I’ll be away if I need to travel, for example. It can’t hurt, right?

Regardless of what you believe, Latifa’s assessment of the human-animal relationship rings true to anyone who has experienced a bond with a special horse.

“Animals have their own personalities, their own souls, their likes and dislikes, just like humans,” she says. “I find that the animals pick the humans that they need to be with. They come to help us, and they’re very good at it. We don’t give them nearly enough credit.”

Find out more about Latifa Meena at www.animalscantalk.com.


Liked this article? Here are others you’ll enjoy:
Life with Horses: Is There a Crystal Ball in Your Barn?
How to Speak Horse

LESLIE POTTER is Senior Associate Web Editor for HorseChannel.com. She can often be found having one-sided conversations with her Morgan, Snoopy, making her co-boarders wonder if she’s lost her mind. Follow her on Twitter: @LeslieInLex.