Home Horse News Equestrian Events The Tortoise and the Hare

The story of the pair’s victory is compelling, involving love, death, challenges, and a pause to scatter the ashes of Kevin Myers, Far’s former owner. It brings tears to both those telling it and those hearing it.

But what of the other 91 riders who successfully completed the grueling, beautiful, life-changing challenge? Everyone started at 5:15 a.m. Tennessee finished at 10 p.m. Fifty of the 92 to complete in 2017 finished in the last hour of the time limit for the 100-mile race. From first to last and in between, there’s a story behind every horse and rider.

Last but Not Least

Jala Neufeld of Yelm, Wash., and her half-Arabian mare, CH Memphis Belle, crossed the finish line and earned their completion buckle at 5:07 a.m. The crowd waiting in the early-morning California darkness was actually larger than the crowd waiting to see the winner. And more vocal.

“Come on!” barked a six-foot-five bald man with a wrestler’s build and a military demeanor. His encouragement sounded like a command.

A ride official stood behind a half-dozen exhausted looking timers sitting at white portable tables near a makeshift arch covered with Christmas tree lights. A chalk line crossed the dusty trail beneath the lights and a large electronic clock blinked the time. The big generator powering the lights and clock drowned out most conversation.

Horses began to emerge from the darkness, usually in groups of three or four. Each time they crossed the line, the crowd and timers erupted into cheers. Like a detonation clock, the numbers kept changing, and if the clock hit 5:15 a.m. and a horse-rider team was not across the line, it would be their dreams blown to bits. No finish. No buckle. Didn’t count.

The tall military man paced and peered down trail, bellowing “Come on!” into the darkness. 5:01, 5:05, 5:06, 5:07. Some spectators had followed their riders off to the stadium and final vet check. Timers rustled papers. Was there one more rider out, or two? They checked their radios. Alone, the final rider, Jala, appeared, and to chants of “Cross! The! Line!” she fulfilled a two-year quest to finish the toughest endurance ride in the world. They had just eight minutes to spare.

Jala had won. She beat the clock. The big guy? Greg, her husband.

“Even after six tours of combat, he got emotional at the finish line,” Jala admitted. “I couldn’t have done it without him and Nicole Miller, my best friend and crew leader.”

The Neufelds saved for two and a half years to fund their Tevis quest.

“A dollar here, some quarters there,” Greg explained. Nicole drove her own truck from Washington state to make sure there was back-up transportation in case the Neufeld’s 2004 white truck with 330,000 miles on the odometer gave them trouble.

“My job,” Greg stated, “was to feed the horse, cook, and sometimes be a personal counselor.”

Was the battle for first place as intense? While Jala was running against the clock, Tennessee and Far had a seriously competitive field of talent to outrun.

Last year’s winner, Karen Donley, and past winners Jeremy and Heather Reynolds were there. The toughest competitor that full-moon Saturday proved to be a 15-year-old powerhouse named Monk, ridden by Lindsey Fisher. Monk had finished fifth last year and as the miles fell away, it became clear Monk had higher aspirations than fifth.

“He felt stronger than last year,” Lindsey recalled. “He was a beast.”

“I think my lowest moment was when we finished the canyons at a walk,” said Tennessee. “And there was Monk up ahead, trotting all the way into the vet check. He looked good.” In 2014, Tennessee finished second on a horse named Shazam, five minutes behind the leader. She had higher aspirations this year too.

Monk left the Foresthill vet check with 32 miles to go, only 6 minutes ahead of Far. As Far waited, Tennessee felt him say, “Don’t worry. I got this. I can do this.” They loped off and caught Monk before the Francisco check (mile 86).

The two world-class endurance horses swept along the trail in the dark. At one point when Far was in front, the trail caved way beneath him.

“His right foot reached out and pulled us up on the remaining trail,” recalled Tennessee. Monk struggled to safety, too. “We both stopped and regrouped, calling back and forth, ‘Are you alright?’”

At the Francisco check, a crew was hastily dispatched into the dark to route riders up the bank around the damaged trail. Far and Monk flew into the final vet check on the trail, Lower Quarry, only 6 miles from the finish.

“I knew I had to leave the vet check in front,” said Tennessee. “After passing the check, I practically swung my leg over the vet’s head as I mounted, and I handed off my card to the out-timer at a gallop. I didn’t look back.

“During the final miles, it felt like we were the only ones on the trail. I didn’t urge Far; I just let him go. We stopped and he tanked up at the Robie Point water trough. All I could hear was my heart beating. I kept listening for the sound of tack jingling, of Monk coming after us. But I knew Monk couldn’t touch us if Far galloped.”

Both Near and Far

Far’s 2017 Tevis win brought closure to many who love the sport, its horses and its people. Far carried his longtime owner Kevin Myers to five Tevis completions, and he won the Haggin Cup (for best conditioned) in 2015 with Jennie Smith.

Under Kevin’s care, Far built the bulk of his present 74/74 race completion rate, consisting of fifteen 100-mile events and fifty-nine 50-mile rides. This record is both highly admired and unusual in the sport. Myers’s sudden death on June 28, 2016, devastated the endurance community. Myers bequeathed Far to Rusty Toth, and when Toth approached Tennessee about riding Far in the 2017 Tevis, they both knew only a win could improve Far’s record.

“I felt tremendous responsibility,” she admitted. Her mission also included a request to spread some of Myers’s ashes on Cougar Rock, the iconic rock climb where riders seem suspended above the mountains.

If Tennessee’s low point was watching Monk trot ahead up a hill in the lead, Jala’s was even more devastating.

“It happened at Robinson Flat,” recalled Jala. “We almost got pulled. The vets were concerned about Belle’s gut sounds. We’d only been 36 miles, and they wanted to see me after our rest hold before we could time out. I was really down, but Belle said, ‘Mom, I got this. I’m fine.’” Cleared to continue, Belle’s gut sounds at the finish-line check were perfect.

Tennessee’s best Tevis moment actually occurred before the ride during Far’s last training exercise. Tennesse had been riding Far for a couple of months to get to know him and things were fine, but jumped to a whole new level of connectivity due to a mountain bike.

“This mountain bike careened around the corner, heading straight for us, and Far went right up a steep bank and came down gently,” she recalled. “After that, we moved as one. We connected viscerally. I rode with a softer touch and we flowed like water. We returned to my crew and they saw the difference. From that moment, everything fell into place. It was such a truly recognizable ah-ha moment. I told my crew: ‘We got this.’”

At the awards banquet held Sunday afternoon, Tennessee and Jala both received a belt buckle, a certificate, and a carnation. Of course, Tennessee’s experience also involved a big trophy, a medal, and a special blanket, but their tears flowed from the same source: gratitude for the horses who carried them 100 miles, keeping them safe, fulfilling their dreams, and bringing them home.

Learn more about The Tevis Cup >> 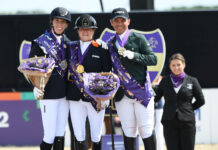