Home Horse Riding and Training Trail and Recreational Riding Your Horse Life: The Horse with One Speed 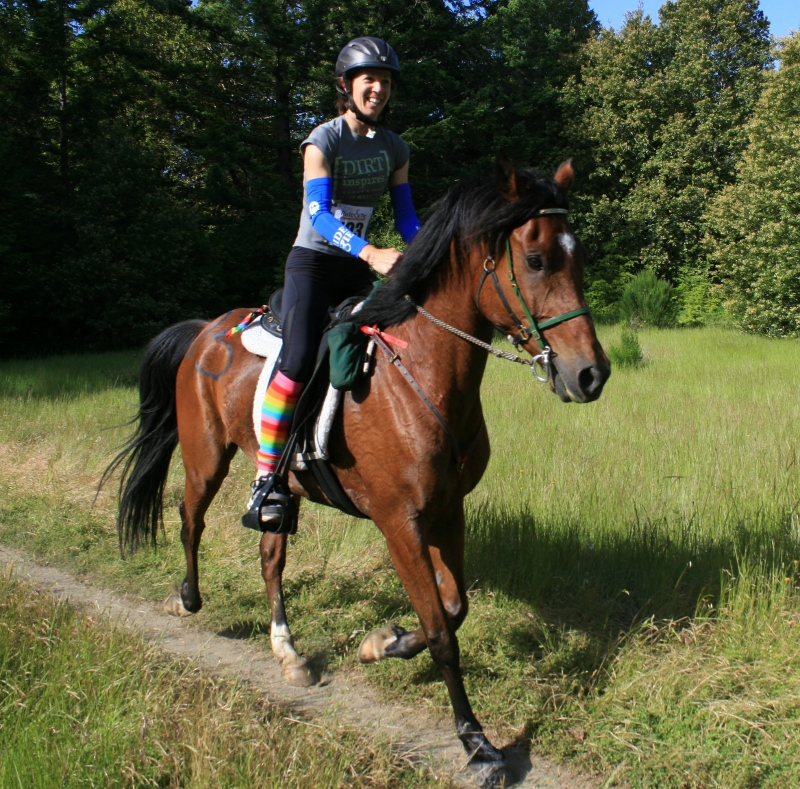 Every once in a while, a horse comes along that reminds me about something important: While most horses are capable, in my opinion, of dabbling in all kinds of equestrian activities, there are a few proverbial square pegs that are simply best suited to a certain discipline.

And it always seems like I rediscover this tiny percentage of highly particular equine athletes along with moments of pure humility. Thus begins the journey of emptying bank accounts on new equipment and trainers while surfing through other sports in the hunt for the elusive fit.

Then there are horses like Serafina. From the moment I laid eyes on this wiry Arabian mare tied to the trailer, I suspected that she was a firecracker. She was not the doe-eyed calm spirit typically seen snoozing in the aisle of a dressage barn, or the low-headed western mount with eyelids at half-mast, or even the spunky kids’ gymkhana horse. No, Serafina came across in those initial moments as wise, charged up and set in her ways. What those ways were I had yet to find out.

I had borrowed Serafina from one of my competitive trail riding students for the purpose of competing in the ride and tie championship, which is a race involving teams of two runners plus one horse leap-frogging down the trail (www.rideandtie.org). I told my student that I needed a horse with stamina, a little bit of speed and a whole lot of sanity. She sent me Serafina, giving me no special instructions beyond the vague disclosure that Serafina did not like to ride behind other horses. With nothing else to go on, I saddled up the little mare for a practice ride.

After five minutes of being throttled around in the saddle atop a bouncing horse that more resembled an excited dolphin, I thought my student must have misunderstood what I was looking for. We were at that moment nowhere near another horse, much less behind one, and yet the mare was high-headed and turbo-charged as I was asking her to settle in to a calm walk. It rattled me to consider that this might actually be her good behavior and that we had not yet seen her in the amped up state she was capable of behind other horses.

I tried a few dressage-like attempts to quiet her down as she jigged and pranced and twisted her neck sideways. I rode a few circles and gave several exaggerated half-halts. Then I gave stronger ones. Then I administered a Hail Mary yank on the reins that in no manner resembled dressage. Regardless of which aids I gave, Serafina didn’t seem to notice or care much about that nice calm walk I was after. Meanwhile, I tried everything I knew to determine if, in the presence of other high-strung horses flying down the trail, we would survive to see the end of the ride. My answer at that point was, probably not. Having gained this clarity, I asked Serafina for a high-speed trot across a wide meadow in order to assume a two-point position and relieve my joints from the jarring they were enduring.

A Change of Pace

Adopting a hunchbacked posture of standing in the stirrups with the reins choked up good and short, I scanned our surroundings for any wildlife that might leap from the pampas grass and startle my high-speed mount. In that instant, I realized all the scanning and rein tension were entirely unnecessary. Serafina was now an orb of Zen-like calmness under me. Her ribcage felt relaxed and swinging; her neck was softly arched. Since launching into high speed at my request, her temperament had puddled into a state of total focus and peace. Her mood was palpable and joyous. She charged down the trail bending left and right as narrow trees necessitated, adjusted her balance for the downhills (her balance, mind you, not her speed), and startled at absolutely nothing. Aside from our raw speed, she was a pleasure to ride; an absolute delight of willingness, confidence and surefootedness.

Just to make sure none of this was a fluke and that I was calling a few more shots than the horse, I asked Serafina to stop. Right on cue, she halted and stood still at the edge of the meadow near some trees. Then I asked her to fly again, which she did without hesitation. Again, I asked her to stop a little farther on. Once more she stood quietly until I gave her the nod to run with abandon. This was how the little firecracker mare and I found common ground. It’s also how she won my heart. Without knowing it, I had tapped into all of the strengths that had most likely annoyed and pummeled previous riders trying to use her for disciplines requiring measures of moderation and grace.

Serafina was a horse with a single speed, and that speed happened to be a bit excessive. Sometimes with horses like her, riders get frustrated and sour. Luckily, I had borrowed Serafina to do an event that capitalized on her natural preferences. For the ride and tie championship, we needed one speed—fast. We also needed an obedient horse that would stop and stand tied to a tree when swapping runners, which Serafina did easily. Over a competitive field of teams, little Serafina—a total rookie in this sport—took 10th place at that ride and tie championship. Her expression at the end of 35 hard miles: bliss. As I massaged her hamstrings and praised her, I let her know how impressed I was by her performance. I also whispered in her ear how grateful I was that I had not borrowed her for a stuffy dressage event.

JEC ARISTOTLE BALLOU is the author of best-selling books 101 Dressage Exercises for Horse and Rider and Equine Fitness. Her new book, 101 Western Dressage Exercises, will be available in July. She teaches and trains in Santa Cruz, Calif. www.jecballou.com

Question of the Week: From Show Horse to Trail Horse