On June 29, I lost my very best four-legged friend. Like any horse owner who has lost a horse, the sadness can feel endless.

Iggy was the first horse I owned as an adult. His care—and the cost of it—was 100 percent my responsibility, as were all decisions about his health. When put down on paper it can seem a daunting task, but it never bothered me to know that I was the one solely responsible for him—after all, that’s just what we horse owners do, right? We care for our horses to the very best of our abilities.

I was lucky enough to have loved Iggy for almost 11 years. I adored him, as most people who deeply love their horses understand. He was quirky and cranky and just plain RED, and I cherished every hair on that old man’s body. 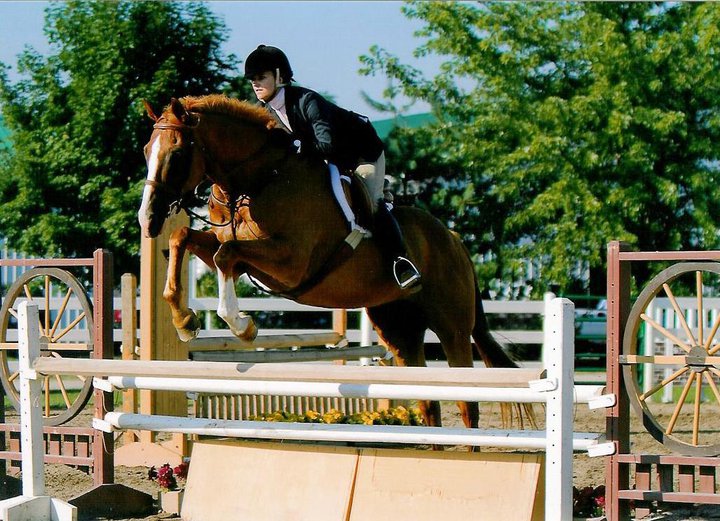 He was always one of “those” horses – he got some pretty fantastic injuries and illnesses over the course of the years I owned him. I am blessed enough to have the best vets in the world to care for him, and we battled back from each issue to come back stronger than before. He was my 3-foot hunter and equitation horse until just months before he passed.

In January of 2015, it became clear that something was not right. After six months of recurring bouts of what appeared to be very minor colic, he was diagnosed with a cecal impaction and a displaced bowel. From the moment the ultrasounds were read, I knew it was a matter of time until he could fight no more.

Aptly dubbed an “old horse disease,” cecal impactions are sneaky beasts. The pain might be mild for months, then one day become agonizing as the cecum ruptures. What I didn’t want was for that to happen in the middle of the night and for him to be in horrific pain until someone found him in the morning. I worried about that horse every minute of every day. Every moment there was that nagging feeling of “what is he doing now? Is he up? Is there someone on the farm? Is he in pain?”

The pain from the impactions would come on swiftly. My red horse was one of the most stoic I have met, but this would drop him to his knees. But throughout his time with the impaction, one dose of oral Banamine would alleviate his pain. The pain was never unmanageable—until the day I put him down.

For six months, I constantly heard that clock ticking. My stress level was through the roof all the time, and I was operating in a constant state of emergency. Though I very much knew that this lifestyle was unsustainable, what were the options, short of euthanizing him? His team and I were doing everything we could to keep him pain free and happy for as long as possible. I knew it was not time—yet. I developed a new mantra. In the back of my head, all day long, I kept saying, “Please let me know what it’s time. Please let me know when it’s time.” I wanted to know I wasn’t being selfish and keeping my horse alive simply because I feared the pain of losing him.

During that time, I was too fearful to leave a four-county radius. I didn’t travel to see my family. I kept my social engagements subdued. My rig was always hooked, full of gas and ready at a moment’s notice. I was constantly worried.

When the day finally came, I can’t explain it any other way than that I just knew. I knew that the pain this time was worse, and after 45 minutes with Banamine on board when it didn’t abate, it became clear that it was time. I made the call to my vet and asked her to please come see Iggy to send him home.

I have no doubt that I did everything I could to save that old man short of surgery. At 22 years old, he was not a good surgical candidate and I didn’t want to put him through it only to have a less-than-stellar prognosis. I know in my heart that I did a lot more than some people would have considered reasonable—and that’s OK.

What is hard for me to deal with, however, is the guilt. I don’t feel guilty about putting him down—not even one bit. I feel guilty because of the relief I felt. As I got on my knees in the grass to hold him one last time, I felt this massive weight lift from my shoulders. And for that I have guilt.

I don’t begrudge one penny, one tear, or one sleepless night that I spent on that horse. But how do I cope with feeling so free after he has gone? You shouldn’t feel that way if you’ve lost something you hold so dear, right?

I look at the forecast for the winter ahead and secretly think, “At least he won’t have to go through another winter like last year.” When the cold Kentucky rains came on in October, I thought, “Oh thank goodness he’s not out in this—he hated having wet ears.”

And then I think, wouldn’t I deal with that stress again for one more month, one more day, one more hour with him? And you know what? I am not sure I could. We all do what we have to do to get through hard times while they’re happening; it’s only in looking back that we wonder how on earth we survived.

I know I gave Iggy the very best life I could. I know I loved him beyond reason. I know it was the right thing to do. Though I feel relief that he is not pain any longer, more than that, selfishly, I feel this relief that I am not so worried, all the time. And there is nothing quite like fully understanding your own selfishness to make you feel like a horrible person.

So what do I do to combat that feeling of selfishness? I pour even more of myself into my young (red!) horse. I work even harder at my job rehoming ex-racehorses. I try so hard to remember that I did everything I could to help my sweet Iggy J and for him, it simply was time. Though I’ve always been cognizant of it, that horse drove home one resounding lesson: There is never, ever enough time with those we love.

That old horse was greatest love and my hardest heartbreak. Now I just need to learn to live with the guilt of being grateful to let him go.

Sarah Coleman has a soft spot for chestnuts
with chrome, including her off-the-track Thoroughbred that she competes
in the hunters. Based in Lexington, Ky., she is the Director of
Education and Development for New Vocations Racehorse Adoption Program.