Home Horse News The Road to the World Show

If anyone had asked me at the beginning of last year if I had plans to attend the 2013 American Quarter Horse Association (AQHA) World Show in November, I would have laughed hysterically. In February, my 2004 bay roan American Quarter Horse gelding Islehava Mocha Latte (aka “The Roanie Pony”) and I were gearing up to make our AQHA debut at the Dixie National Quarter Horse Show in one class: Amateur Ranch Horse Pleasure.

That first show didn’t go well. We were both nervous; neither of us were quite ready to handle the pressure of four judges, photographer’s flashes and large entries. But we survived it, barely.

We didn’t let our less-than-stellar debut bother us and instead let it fuel us through the spring, summer and early fall with seven shows in Florida and Mississippi. We practiced five days a week for hours at time and added reining, horsemanship, trail, barrels and poles to our repertoire. We would haul four hours and stay a few days to ride with my trainer and mentor, Tom McBeath, of Union, Miss., every few months to check our progress and get homework. 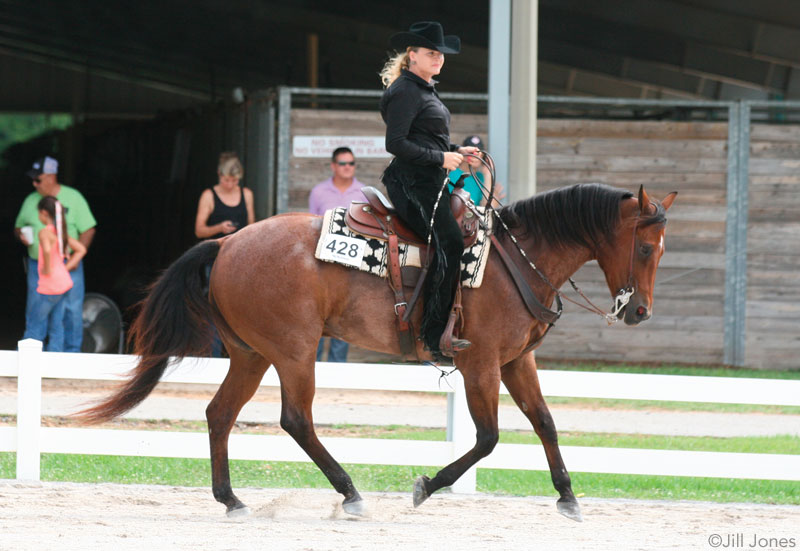 In their rookie year of AQHA competition, Emily Peak and her horse, Islehava Mocha Latte, qualified for the World Show.

In the spring we had qualified for both the open and amateur ranch horse classes at the AQHA World Show, but I didn’t seriously think about going all the way to Oklahoma City until one day in July. A close riding friend and mentor died suddenly, and it was a reminder of how precious life really is. We’re not promised tomorrow. Never being a person who lives with regret, I decided I was going to the World Show. Never mind this was my rookie year. Never mind I had never even been to the World Show to watch. Those were minor details.

By the time we were to leave for Oklahoma City, the Roanie Pony and I had earned our amateur performance register of merit (ROM) and our open ROM. We had earned 34.5 points. We were leading the AQHA/Justin Rookie Award for Alabama and were 10th in the nation for our age group. Going to the World Show was the icing on the cake. All we had to do now was get there, stay focused, stay on pattern and keep a leg on each side.

Of course I am simplifying the process. Much planning went into getting ready to leave: strategically budgeting finances, managing shoeing schedules and vet visits; making packing lists; taking care of trailer and vehicle maintenance; and mentally preparing my kids and husband for my lengthy absence. There was indeed much to do, so it’s a good thing I started planning in July!

Good planning leaves room for error, or as I call it, “wiggle room.” Little did I know how much I would need. My plan was to leave Friday at 6 a.m. so I could be ahead of commuters and be at my layover in Shreveport, La., by 2 p.m. so my horse could have turnout time.

At 8 a.m. I broke down on the side of the road. The culprit: water in the fuel. My husband was unable to get to me, but fortunately I had a friend who drove an hour and a half to help. Armed with new fuel filters and able to fix the problem, he couldn’t have been a more welcome sight had he been flying and wearing a cape. Without him, my journey would have been over right there. He wouldn’t even let me pay him for the parts or his time. Six hours behind schedule, I was eventually on my way and arrived in Shreveport by 8:30 p.m. The Roanie Pony was elated to finally be off the trailer!

The next morning, my Shreveport friends (I called them my “angels”) had taken my truck in to be looked at. They feared it wasn’t going to get me there and insisted I take their spare truck to Oklahoma City. I was amazed at the generosity I had received once again, feeling there was no possible way I could ever pay it back. I was told, “It’s not about paying it back. It’s about paying it forward.” My dream could continue because of the kindness of friends.

By the time I finally reached Oklahoma City, checked in and found my stall, it was 8 p.m. Two hours of unloading shavings, feed, hay and tack, and I was ready to rest. But not for long. At 3 a.m., I had to get up and prepare for the first practice ride; the arena was only open until 7 a.m., so I needed to be on by 5. Three early morning and two late-night rides later, it was show time.

Out of 79 entries, I was sixth in the draw. My horse and I were so tired; we both were just ready for it to be over regardless of the outcome. After exiting the pen we just kept on going to the stall, not hearing our score. It wasn’t until I walked back that a friend and fellow exhibitor told us we looked good and had a 218.5. Was that good? Heck, I didn’t know! After waiting for all the other riders to go, we finally learned that the cutoff was 218.5. I had just made the finals! I lost all control of the waterworks and cried, feeling blessed and thankful for the opportunity and again humbled by the generosity of the people who helped get me there.

The night of the finals came and I was just thrilled to be there. While we were 15th out of the final 16, for our first World Show during our rookie year, I am pretty tickled to have been in the same arena as those amazing horses and riders.

After a few days off, it was back to work, trying to get time in the arena to learn a new pattern for the open ranch horse pleasure class that had 108 entries. Part of the art and science of showing horses is learning how much work they need in order to perform their best. It’s tricky learning how much “fresh” to take off without leaving your horse too tired or cranky. In my case, I don’t think I took enough fresh off, but as a rookie that’s something I’m still learning. We marked a 207 and it took a 225.5 to make it back to the finals.

My horse and I came a long way in a short time during our rookie year. After a few months off, we returned to the show pen in 2014 as more experienced competitors. So far, it has been an amazing show year for us. We’ve made big strides in improving our skill level in many classes, but the most important thing we’ve improved has been in our mental game.

We continue showing in reining, ranch horse pleasure, horsemanship and performance gelding. No matter what the event is, as it was for last year’s World Show, our goal is always “stay on pattern and a leg on each side!”

EMILY PEAK is a professional photographer who lives in south Alabama with her husband and two boys.

A version of this article originally appeared in the Mid-South Horse Review.