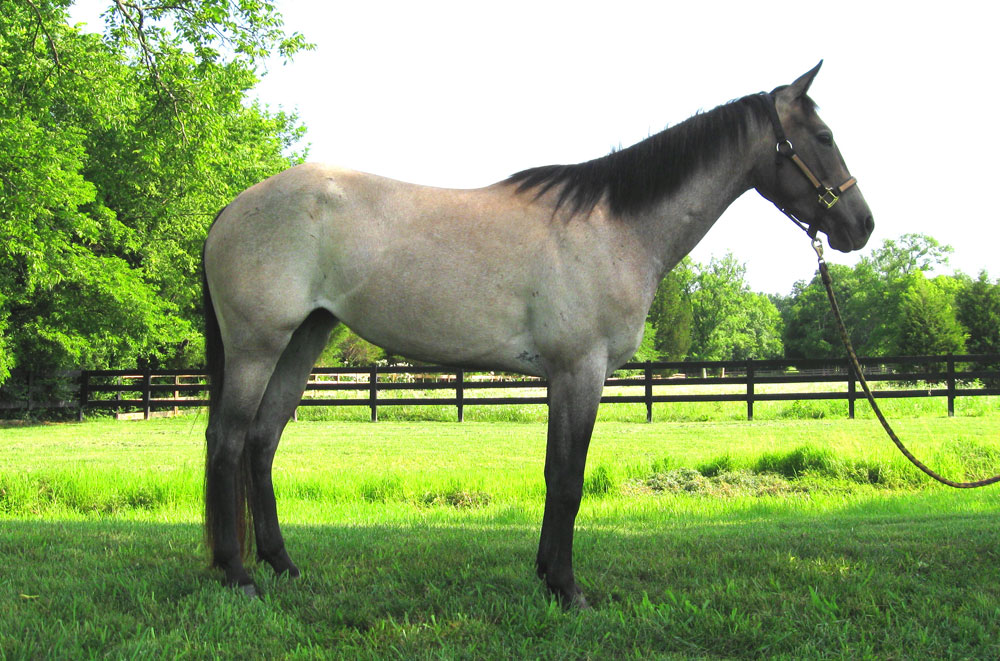 One of my horses is a pretty Quarter Horse mare I met when she was 3 years old. Zena is a well-built beautiful blue-gray with black points and a heart of gold. She arrived with two other horses at a farm where I was working several years ago. I did the fundamental groundwork with her and her travel-mates. Of the three horses she was the calmest, most wary, but the quickest to learn – a highly intelligent horse who was eager to participate and learn.

Sometime after Zena and her buddies arrived at the farm someone was hired to “start” them along with some other horses the farm owner had. The intensity of pressure these horses endured during this training process was at a level of intensity I would define as abusive. They were lunged relentlessly on tight circles while being terrorized by a plastic flag. There was no means of escape or chance to give the right answer because no questions were ever asked. These horses went from serene pasture life and light handling to being saddled and ridden hard in less than 2 days. They had bald spots and sores on their faces from harshly used rope halters. One of the mares was so traumatized by the experience that she colicked and foundered after one of her rides. A gelding sustained tendon damage in both front legs. Other horses had spur sores, leg gashes and went into desperate fits of bucking at the start of each session. They all suffered emotional and physical damage. 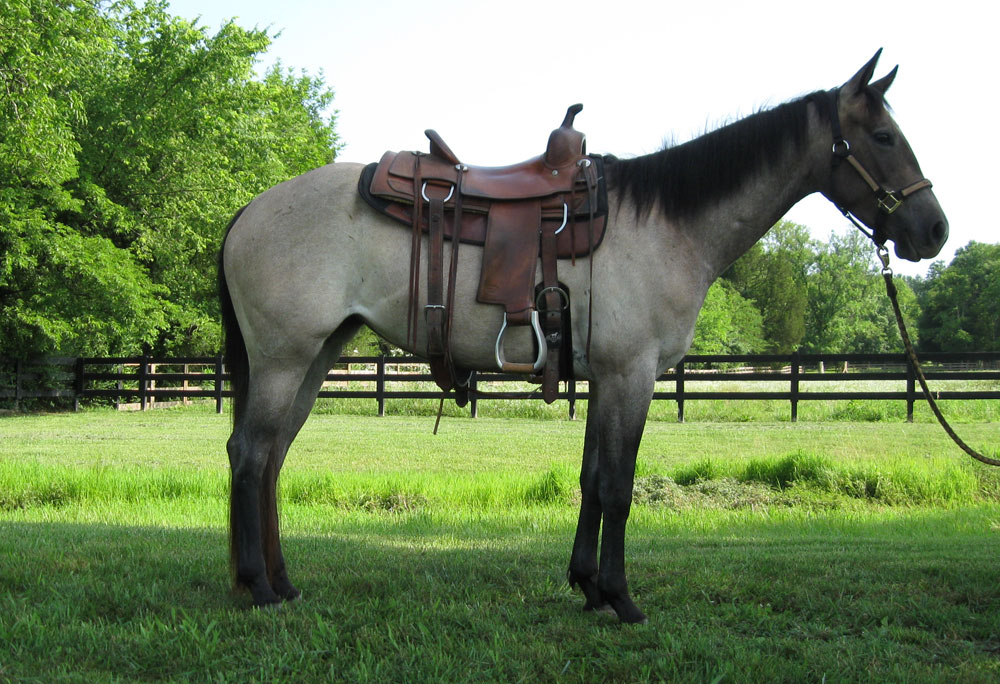 The rough handling Zena endured in her early saddle training caused her to lose weight and shut down mentally.

Zena suffered along with the rest but sustained the least amount of obvious bodily injury. I think she was smart enough to figure out how to cope with the situation. By going with the flow as much as possible she kept herself safe. She basically shut down, which is a common response from horses who go through this kind of trauma. Sadly this psychological withdrawal is often misinterpreted as submission, but Zena’s ability to be compliant instead of reactive (running away or fighting back) likely protected her from much worse. Nevertheless, there was a physical and psychological toll. The stress caused rapid and extreme weight loss. You couldn’t touch her face or tie her (she’d been beaten in the face with a flag on a stick). She would sit back and nearly fall over when you picked up her front feet. She had back pain and became understandably impossible to catch.

Moving Past the Trauma

Sometime later the farm where Zena lived suddenly closed leaving her and other horses homeless. I was able to take her, another horse, and find homes for some of the rest. For six months I could barely touch Zena. She was terribly afraid and had every reason to be. I left her alone as much as possible so she could be a horse and decompress. When I did need or want to interact with her I tried to do so in a manner that was comfortable for her and didn’t trigger fear.

Zena was cautious and withdrawn after her negative experiences with humans.

As a professional, I understood what it would take for Zena to be able to trust people again and be able to handle reasonable amounts of pressure and guidance without becoming reactive. I was certain she would need a great deal of time and work to rebuild her confidence and restore trust; I was completely wrong.

That’s because about six months after she became part of my family, Zena decided that the bad stuff that happened was behind her and was never going to happen again. She was suddenly easy to catch. I could touch her face, pick up her feet, and groom her haltered or not while she stood calm and relaxed. This all came from her. I did not actively influence these changes. Sure, I handled her in the least threatening manner possible. I did some pressure-active release work (which is part of my Unnatural Horsemanship approach) and basic handling, but I did none of the intensive emotional rehabilitation a horse who had gone through what she had would need.

The day I realized how successful she had been at letting go of the past, I walked into her pasture with a bag-on-stick a halter, long lead, patience, and time. I had witnessed her being tormented by this device and was determined to help her heal from this past trauma. As I was preparing to help this “poor frightened animal”, gathering equipment and planning my approach, Zena walked up behind me, picked up the horrifying (or so I thought!) stick and bag and waved it around like she was at a parade. I held my breath waiting for the imminent explosion when fun turned into fear, but it never came. Once she let it go (which took awhile since she was having a great time), I picked it up and gently moved it toward her body. I expected some kind of reaction, but instead got a Valley girl, “What-ever!” sigh. Then she tried to grab it back. I rubbed the bag all over her body and legs (never did put the halter on), pet my horse, picked up my stuff and left the pasture in utter amazement.

Three months later, Zena’s weight was up and her personality started to shine through.

Any doubts of her extraordinary recovery were put to rest when I decided to blanket her for the first time. All horses are a little leery during their first blanketing, right? She’d had nothing put on her back for over a year and had never worn a blanket. I had done no desensitizing work to prepare her so there was no telling how she would respond. It seemed like a great teaching moment so I gathered my video camera and operator and we headed to the pasture. We were ready to record all the interesting behaviors Zena was going to exhibit and observe as I used my gentle and effective techniques to help her feel confident and be successful:

Step one: I catch Zena (translation: Zena walks up to see what we are doing and tries to eat the camera).

Step two: I set the blanket on the ground so Zena can investigate the blanket on her own and feel empowered (Translation: Zena sniffed it, stomped on it, then picked it up because it clearly needed a good shake. I had to take it away before there was nothing left but tatters).

Step three: Touch the folded blanket to Zena’s shoulder. We made sure the camera was at the perfect angle and the lens wide enough to capture the moment which was: a horse standing there while being touched on the shoulder by a blanket.

Moving on to Step four: I fold the blanket and gently lay it across her back while scrutinizing her posture for signs of stress. Fortunately we got this thrilling scene on video: a bored mare wearing a folded blanket over her back.

Step five: I am now going to open the blanket and position it over her entire body! I am ready to help when she realizes the blanket has enveloped her! The camera is rolling! What did we film? Zena standing there wearing a blanket, like she’d been born with it on. We turned the off the camera and called it a good day.

Today, Zena is a goofy, loving mare who shows no signs of the mishandled, withdrawn horse she once was.

I have seen a lot in my 30 years as an equestrian and trainer, yet I have never seen an emotionally traumatized horse heal herself like Zena did. I would have told anyone that it isn’t possible. It certainly isn’t logical, but then my Zena is one of a kind. I am in awe of my special girl and deeply grateful she’s in my life.

Dale Rudin is a CHA-certified riding instructor and clinician with a mindful and balanced approach to horsemanship and riding.
www.un-naturalhorsemanship.com

Meet the Horses of the Maker’s Mark Secretariat Center