Home Equestrian Lifestyle The Unlikely Friendship of Linny and Lili

Linny and Lili are a study in opposites. Linny is a Welsh Cob, 14.1 hands tall, dark bay, regal, majestic, and imposing. She is very much a boss mare and let’s everyone know it in the nicest no-nonsense way she can.

Lili, on the other hand, is the definition of petite—an 11.1-hand Welsh Mountain Pony just brimming with personality. She’s a tiny palomino with no leadership skills at all; she lives to be instructed by others and enjoys spooking at the exact same things every day, just because it’s fun. She’s also one of the sweetest ponies in the world. 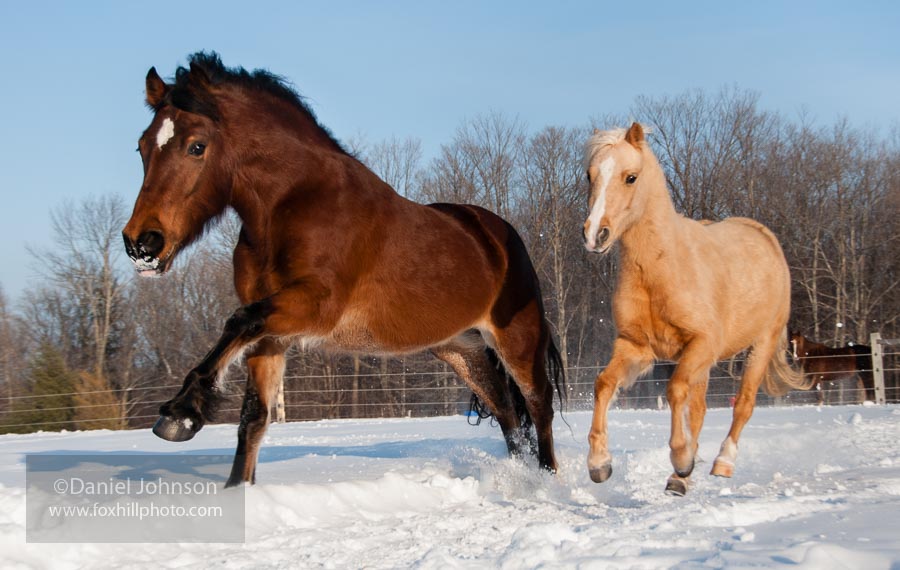 It may be surprising to learn that these polar opposites are best friends.

They weren’t always friends, but that’s just because they didn’t always know each other. Their friendship began when it became necessary for Lili to be separated from her long-time pasture mate, and Linny was between buddies. Linny had to find new buddies fairly frequently—she had a habit of making other ponies dislike her, thanks to her alpha mare ways and her habit of taking pasture mates for long “walks.” These walks consisted of Linny nosing her friends back and forth along the fence lines, making them walk whether they wanted to or not. She was never mean about it—just firm—but none of the other ponies seemed to appreciate it.

Linny also liked babies. She had never been a broodmare, but she heartily admired other mares’ foals and apparently thought of herself as something of a surrogate auntie to them. So when it came time to switch up the pasture assignments, we decided to see how Lili and Linny would tolerate each other as pasture buddies.
Surprisingly enough, despite the disparity in their sizes, they took to each other immediately, as if—finally—Linny had been given the gift of a friend that embodied everything she’d ever wanted, all in a teeny-tiny palomino package.

Today, Linny is sure that Lili is her baby, and she mothers her carefully, making sure that Lili gets her daily exercise by going for walks. Lili doesn’t mind, because Linny is obviously her “mother” and therefore, must be obeyed. They do everything together. If Linny runs, so does Lili. If Lili grazes, so does Linny. It’s a rare day that you look out the window and see them on opposite ends of the pasture; 99 percent of the time, they’re joined at the hip.

When Linny decides that they are thirsty, they come—together—for a drink. Linny drinks first, always, and when Linny is finished, Lili drinks. They have an unwritten set of rules that both abide by and both understand unequivocally.

Over the years, their friendship has extended beyond sharing a pasture together. Now they also have to have adjoining stalls so they can see each other inside the barn as well as outside of it. They’re truly inseparable—and the nicest thing about Linny’s ‘baby’ is that Lili is a baby who is already grown up, which means that Linny can keep taking Lili on walks for as long as she likes…