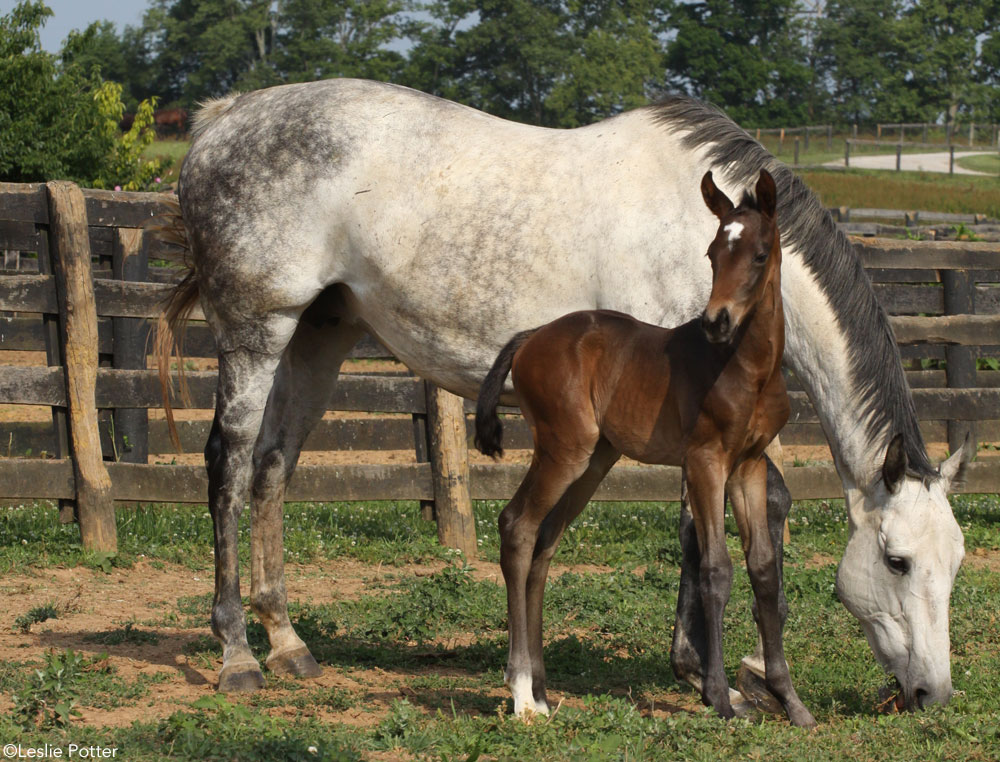 The 14-day-old foal skittered away from me and ducked under his mother as I tried to get a good look at his front legs. The owner was holding the huge mare, who was prancing and agitated. After her hind foot whizzed past my ear, I decided that we needed to rethink the situation.

I was there to evaluate little Olin for a problem in his front legs. The owner had noticed that he was fairly crooked-legged when he was born and had wisely confined the mare and foal to a small pen for 10 days. Often this approach will straighten out bad legs, but it wasn’t working on Olin. If anything, he was worse.

Olin’s mother, Bijou’s Jubilee, was a fancy warmblood. She’d been a top-ranked competitor at a number of prestigious recognized dressage shows, but had retired due to injury. Her offspring were just entering training and it was yet to be seen how they would perform, but the owner had high hopes for Olin.

Olin peered at me from underneath the mare’s shining barrel. Sensing me inspecting her baby, Bijou’s ears pinned flat, the whites of her eyes gleaming. The owner took his attention away from her to reach into his pocket for a horse cookie, and Bijou struck like a snake.

She seized the man by his arm and flung him to the ground. I rushed to his aid, but the mare lunged at my back, knocking me sideways. I was able to scramble through the partially opened stall door and banged it shut as she crashed against it.

Shaking, I climbed to my feet, realized I was unharmed, and peered cautiously through the bars of the stall. The owner was huddled under the automatic waterer, his arm bleeding.

Bijou had her back to us, swishing her tail furiously. The baby blundered against her hind legs, and when she caught a glimpse of me, she spun and lunged again, her teeth clattering on the metal bars.

I looked frantically around the barn and caught sight of a small, dark-haired man mucking a stall. He didn’t speak any English, but had no trouble understanding my frantic pointing and jabbering, and trotted quickly down the barn aisle. He snatched a chain lead from the wall, and before I could stop him, he’d entered Bijou’s stall.

The little man marched straight to her head, lecturing sharply in Spanish. Bijou, ears still pinned, whipped her head threateningly. Olin scrambled behind her, distracting her, and the little man swiftly darted forward.

With rapid movements, he threaded the chain over her nose and secured it to her halter, dodging her attempts to bite him. She bared her teeth and tried rearing but he just popped the chain firmly and barked more orders in Spanish, then turned to me and jerked his head at Olin.


The owner had emerged from his hiding place cradling his arm and waved me away when I tried to look at the injury. He was more worried about Olin. Bijou sulked as we pounced on her baby and I quickly assessed his legs, which were definitely crooked.

She shifted quickly once and stomped a huge hoof, but froze at another flood of words from the little man. I was able to take X-rays of Olin’s legs and measure the deformity in his knees, although I watched Bijou out of the corner of my eye, my hands still shaking a little.

Straightening Out the Problem

Olin had a limb problem referred to as a valgus deformity. The medial side of the radius, the long bone above the knee, was outgrowing the lateral aspect, causing the legs to take on a knock-kneed appearance.

I called a farrier that I worked closely with and he was able to come right out and trim the foal’s feet, then glue on some hoof extensions to help bring the legs into the correct position. Bijou and her handler stood quietly in the corner as the farrier worked on Olin, and I learned that the man’s name was Miguel.

A week later, we were all back with Miguel, Bijou and Olin, who had improved, but still had a long way to go. I sedated the foal lightly and performed a simple procedure to stimulate the sluggish growth plate on the outside of his knees.

Bijou seemed to be in a trance as Miguel muttered to her and, there was no more bad behavior from her. The sleepy foal returned to his mother with bandages on both legs and fell asleep trying to nurse.

Four weeks later, Olin was dramatically better, and again, Miguel expertly managed Bijou as the owner and I inspected the foal. Miguel was smiling as I took more X-rays, and I thanked him for keeping us safe. He might not have understood my words, but he knew what I meant, and his smile deepened as he gave Bijou a rough head rub.

Three months later, I leaned on the paddock fence with the owner as Olin and Bijou ran a race in the field, the colt’s legs perfectly straight and beautiful. The owner had some scars on his arm, but he never took his eyes off Olin, who eventually lived up to everyone’s expectations, successfully competing in dressage at the Grand Prix level in Europe and America.

Miguel, the unsung hero, worked at the barn for many more years, emerging quietly from the shadows to handle difficult horses for many more veterinarians. I never learned where he came from or what his background was, but he routinely turned frightening and potentially dangerous horses into well-controlled and quiet animals, and kept numerous people safe.

Maybe I was the vet who got to be great once by straightening a valuable foal’s legs, but if it weren’t for Miguel, who was great every day, it wouldn’t have been possible.

The Last Straw
Added Value
Caller on the Line


COURTNEY S. DIEHL, DVM, has been an equine veterinarian since 2000. She resides in Steamboat Springs, Colo., where she is in private practice. Her first book, Horse Vet, Chronicles of a Mobile Veterinarian, was published in 2014. She is currently at work on her second book.