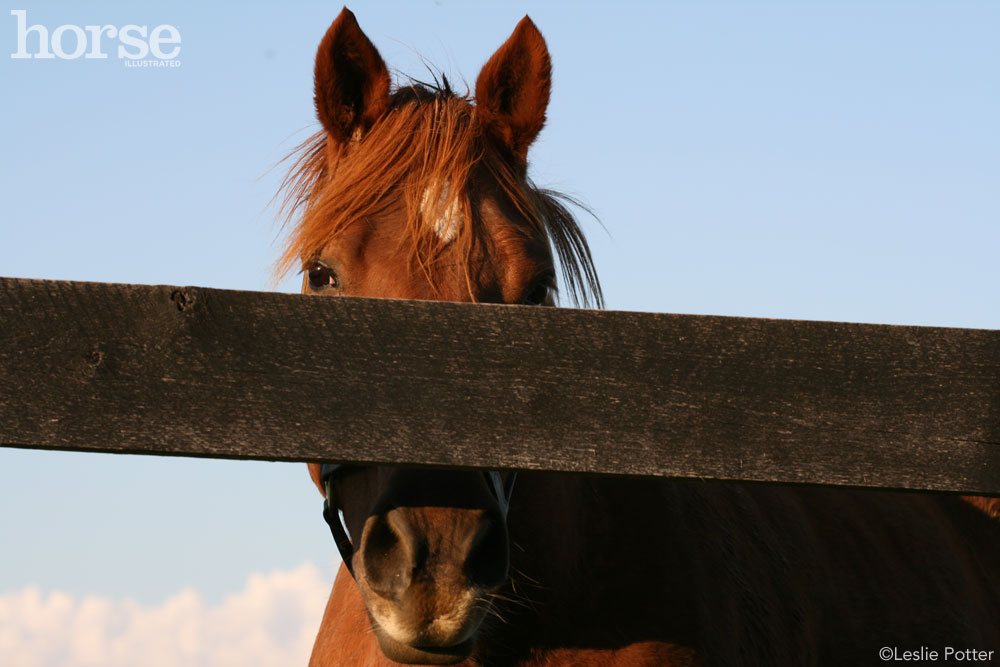 The sorrel filly with the white star stood dismally along the fence line, her right front limb pointed and her flanks drawn. Her pretty head was hanging low, and a dreadful wound was visible on the painful limb just above her knee.

It was a deep laceration, a 6-inch wide skin flap that hung low, exposing a large tear into the muscles of the leg. It looked to be several days old and was coated with a horrid material called Magic Violet, a product I knew and loathed, as it invariably turned everything it touched a deep, permanent purple. Ranchers liked to use it for wounds, but as it consisted mainly of rubbing alcohol and gentian violet, it seemed that its greatest benefit was its alarming color.

I was heavily pregnant and struggled to climb through the wire fence to get to the horse. Mortifyingly, I pitched forward and landed on my knees, but no one had noticed, so I hauled myself up and hurried over to the patient.

The sheriff was on the scene and was having difficulty communicating with the owners of the horse, but they finally agreed to surrender the filly to the local horse rescue for medical care. The rescue would cover her expenses and give the young horse a place to live until she recovered from her injury.

The Battle to Get Better

The filly stood meekly as a volunteer cautiously eased a halter on her, but she refused to move. I examined her and she had a temperature of 103, elevated heart rate, tacky gums and a slow capillary refill time. There was some infection in the leg, but I doubted this was driving up her temperature. She was simply unable to get to food and water, and had been standing in the hot sun for several days. She was about 2 years old.

I cleaned and bandaged the wound. A wet grain mash and some freshly cut grass was offered, but she ignored it. However, after a volunteer tucked a little grass into her mouth, she came to life and devoured the ration. A small amount of water was offered and she drank it down. I planned to start her on some antibiotics once she was rehydrated.

I had to get to another call, so we scheduled a recheck. The filly would be moved to the rescue’s facility and I would meet them there. The next morning, I drove up confidently and could see the filly in a round pen. The volunteers were waiting, but looked doubtful as I waddled over to the enclosure.

After a 10-minute battle, a volunteer succeeded in snaring the runaway horse and wrestling her into her halter. I cautiously entered the pen, but every time I touched the young horse, she’d shove her body into me, driving me backwards. I tried to work the bandage free, but she struck at me with the good leg. I tried sedating her, but every time the needle touched her, she fought violently. Finally, I was able to sneak an intramuscular shot in, and after an eternity, she settled down and I was able to change her bandage.

I had to repeat the process every single time I saw her. She would get so wound up that handling her became impossible, and I dreaded each visit. She didn’t respond to soothing words or neck scratches and she fought us constantly. But the leg was doing well, and she was healing beautifully. When the day came that I no longer had to visit her, I was grateful. The rescue sent for a trainer and named the filly Eve. I shook my head and wished them luck. They’d need it.

I sold my practice and we moved away from Colorado for two years before eventually returning. I set up practice in a town about two hours away from the rescue, then discovered that I was pregnant with my second child.

When I was well into my third trimester, I got a call from a children’s riding camp, wanting me to evaluate one of their horses. I arrived to find a pretty 4-year-old sorrel mare with a star on her forehead, and learned that she’d bucked her owner off and the woman had broken her pelvis. It didn’t take me long to realize who the horse was, and I cautiously examined her, my large pregnant belly once again making me clumsy. Eve and I stared at each other, and I had to laugh at the situation. I was ready for nasty behavior, but to my surprise she was quiet, inspecting my abdomen, and even accepting a head rub.

Two weeks later she was back at the rescue and I floated her teeth without issue. My husband came to look at Eve and adopted her on the spot, and the two of them had a great time roping cows and going on long rides in the mountains.

Our daughters got bigger, and we had our hands full chasing toddlers around, then preschoolers, then kindergartners. Eve didn’t have much to do in those days, but we brought our little girls out to see her regularly and she delighted in the attention. By the time my oldest daughter, Sunny, was in second grade, she wanted to join a local riding club.

Eve went to a trainer to prepare for her new job. But I still watched anxiously on the first day that she and Sunny trotted around the large arena. However, there was nothing to worry about. Eve moved slowly and carefully, protecting the precious cargo on her back, and the two quickly graduated to cantering, then finally rode out in the open fields and on the trails.

Today, Eve is my daughter’s best friend. Who would have thought that this hell-raising filly would’ve turned out so well? She does everything Sunny asks her to do, and they adore each other.

You can still see the scar on her knee, but you can’t see any other evidence of the old Eve.