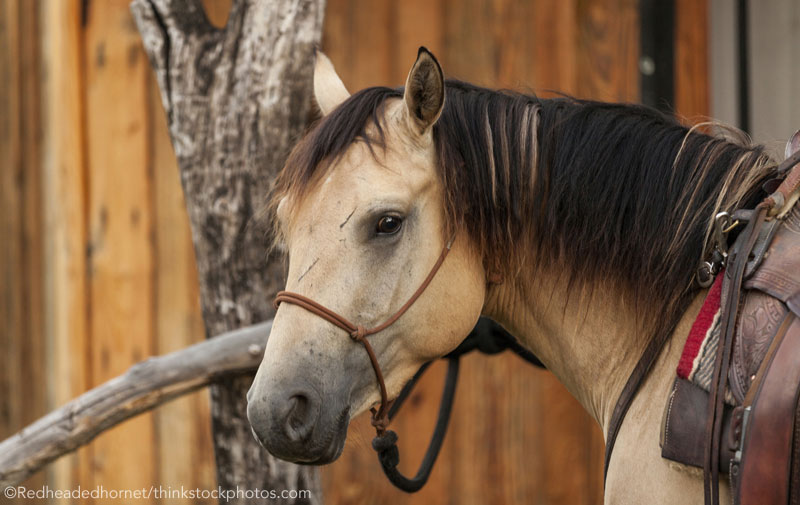 Sometimes getting a history on a horse for a pre-purchase exam is difficult. But Fred, the potential buyer in this case, is a font of information. The horse, who we’ll call “Doc’s No Bueno,” has “fantastic bloodlines” (meaningless), is “only” 10 years old (meaningless), and hasn’t been in steady work for the last two years (probably bad).

The sale price is relatively low for such an amazing animal (definitely bad), and Fred is starstruck, explaining to me that the sellers are making him a special deal (even worse). My exam is just a formality, he tells me confidently.

I begin the exam with the sense that I am getting ready to walk the plank.

“Last year, I heard that his owners had two colts sell for almost 20 thousand each,” Fred says happily. “One was a half-brother to this horse right here!”

I lift the horse’s feet, noticing the old, worn shoes and long, overgrown hooves. His teeth are sharp and in need of a float. He’s a little overweight, and there are old, white saddle marks on his withers and back.

“He’s one of their best horses, so he’s been resting,” Fred announces. “Since I’m going to rope off him, I want his hocks checked. Hocks are important.”

I agree that hocks are important. Of course, coffin joints, ankles, stifles, knees, feet, spine, and neck are probably important too, but Fred is very enthusiastic about the hocks. He gives me a short lecture about how roping horses use their hocks a lot.

I begin the exam. The horse is friendly, and I find myself liking him despite my misgivings. I see Fred giving him head rubs and murmuring into his ear while I’m examining the legs. He perks up when I reach the hind legs, and as I’m palpating the ankles, he wonders what I’m making of “those hocks.” I point to the actual hocks and ask him to name this part of the leg. When he suggests that those are the knees, I can see that an anatomy lesson in the near future might not be a bad idea.

When I watch Doc’s No Bueno move on a longeline, I see problems with a front leg. We move to the arena to see him under saddle and the lameness worsens. Fred jounces like a sack of potatoes as the horse’s head bobs miserably, and he finally pulls to a stop in front of me.

I’ve learned that sometimes it’s best to let the buyer speak first, so I remain silent. Fred looks at me expectantly, still in the saddle, and I say nothing, waiting for him to tell me how disappointed he is and how we obviously must stop the exam right away.

The silence lengthens, and I drum my fingers on the fence and steal a quick look at my cell phone.

“Oh. No, I was waiting to hear from you, actually,” I respond.

“See how he’s moving? It’s his training! You can tell a horse from this barn a mile away. They go differently than most horses! A lot of people don’t recognize the style,” he explains, sounding as though he might be parroting something he’s been told recently. Then he beams. “What did you make of the hocks?”

His eyes bulge. “This horse isn’t lame! I told you, it’s the training! You have to know the style. Look, just watch him again and I’ll explain it better to you!” He takes off into a fast trot, and the head bob is so pronounced now, it looks like Fred’s on a rocking horse.


I’m yelling at him to please stop when a familiar battered blue Dodge truck with one white door rumbles up to the arena and parks next to me. It’s my friend Jimmy, one of the best farriers in the area, and I’m really glad to see him. Fred’s going faster now that his audience has doubled in size, and I yell louder but he’s ignoring me.

Jimmy is a jockey-sized man in his mid-50s, and he emerges from the truck in a cloud of cigarette smoke. He gives me a quick hug and then scowls at the bobbing horse and rider.

“He told me to come shoe this horse today. Said he’d already bought him.” He gives the horse and rider another incredulous look, cups his hands around his mouth and bellows, “Fred! Get off that damn crippled horse before you kill him!”

Fred is already explaining as he hops down from the winded animal, but Jimmy hurls his cigarette into the dirt, grinds it with his heel, then spits. “If you’ve already bought this lame damn thing, Fred, then there’s no help for you!” He grins at me and tips his cowboy hat. “Good luck with this one, Doc!” He leans comfortably against his truck and taps out another cigarette from the pack in his breast pocket, ready to enjoy the show.

Again, I try the silence tactic on Fred who is looking sadly at the horse.

“Well, I like the hocks a lot, Doc,” he finally says. “But I’m thinking he’s got the wrong kind of body for roping. Neck’s a little longer than I like to see.”

Jimmy guffaws and I give him the Look of Death. He quiets down a little, but still snorts occasionally as Fred and I converse.

“And that right front lameness might be a problem too?” I ask Fred.

He gives me a hunted look and doesn’t respond.

“Fred, did you already buy this horse?”

I’m opening my mouth to speak when Fred straightens up. “Now Doc, this horse definitely isn’t built right for roping. Once I’d ridden him around a little, I could see that plain as day. But I think he might have just the right conformation to carry my little grandkids around!”

Courtney S. Diehl, DVM, has been an equine veterinarian since 2000. After an internship at a private referral practice in Saratoga Springs, N.Y., Diehl owned and operated an equine mobile practice in Eagle, Colo. She went on to complete a fellowship in internal medicine and critical care at Hagyard, Davidson, McGee in Lexington, Ky., before returning to Steamboat Springs, Colo., where she remains in private practice. Her first book, Horse Vet, Chronicles of a Mobile Veterinarian, was published in 2014, and she is currently at work on her second book.

Eric Lamaze and Hickstead at the Spruce Meadows Masters Tournament