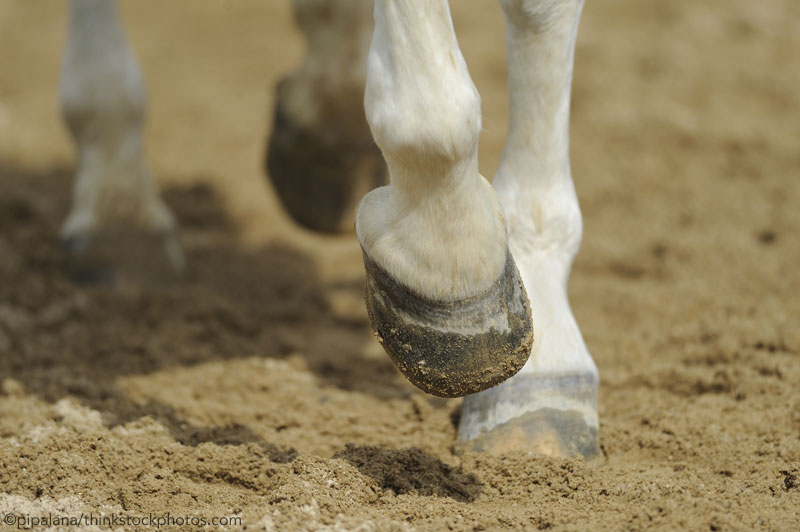 Cisco had been injured on a ride several hours away, and had already been seen by the local vet. But a few weeks of foot soaking, poultices and pain medication had passed with no improvement, and Michelle was getting frustrated.

I put my hoof testers on Cisco’s hind foot. I wasn’t expecting any reaction, as my colleague had reported a negative hoof test. But when I squeezed across the frog, Cisco jerked the foot violently. When Michelle walked Cisco down the aisle, he walked on his toe, reluctant to put the sore heel down.

She spoke as I was about to share my findings.

“Dr. Diehl, we think the injury is definitely in his back. And his feet don’t look right so that might be why.”

Cisco’s unshod hind feet were immaculately trimmed and balanced, plus I’d already checked his back and hind legs. The previous vet’s nerve block and my hoof tester exam had definitively localized the pain to the foot.

“My trainer was here yesterday. She found that he flinched right here and said that this was the problem. See?” She stubbed a finger several times firmly into the side of Cisco’s lower back, and he flinched rhythmically with her prodding.

My phone rang. Apologizing, I walked down the aisle and answered.

“Why in the hell is that idiot trainer, Vanessa, telling me the problem is in the back?” roared Cisco’s farrier, Ritchie, on the other end of the phone. “I hoof tested that horse two days ago and the lameness is in his heels!”

“Hello Ritchie.” I said cheerfully. “Did you get my message this morning that I was going to see Cisco today for a back problem?”

A loud flood of expletives poured through my phone, and chuckling, I held it far away from my ear. Ritchie and I were old buddies, and I was used to this. When I could get a word in edgewise, I agreed that the problem was in the heels.

“Let me call you when I’m finished with the horse and have talked with the owner,” I said. “Any chance you could make it out here tonight?”

There was a growl of assent and Ritchie clicked off. I was returning to the horse, when the line rang again. This time it was Vanessa.

“That Ritchie is so completely rude. The pain is obviously in Cisco’s back! I told Michelle to fire him and start using my farrier, Brent. He’s amazing with hoof angles.”

“Cisco’s angles are fine,” I said wearily. “The horse has a foot injury and I need Ritchie over here right now.”

“If it’s his back, then why do you want Brent to work on his feet?”

“Because bad angles cause back pain! Everyone knows that!” she spat.

“Vanessa, I have to go now. Thanks for the call.” I hung up quickly and turned off the ringer.

“Michelle, look.” I started prodding Cisco firmly from his poll to his rump. He flinched in time with my poking, and shot me a look of deep annoyance. I patted his neck gently but he turned his head away.

“I can make any horse flinch if I poke him a certain way. It’s not diagnostic for pain. We need to put a special shoe on Cisco’s foot, and I need Ritchie here now. Do I have your permission to call him?”

Michelle argued weakly for a few minutes but she was losing momentum. For good measure, I pointed out the excellent conformation of Cisco’s feet and the utter amazingness of his angles, and she crumbled.


I X-rayed the foot again to make sure we weren’t missing anything, and soon Ritchie was backing his big truck up to the barn and had expertly hand-forged a special shoe for the horse to protect his sore heels.

After nailing the shoe on, he packed the sole with soft material to further cushion the foot. Michelle led Cisco down the aisle, and he walked happily beside her. He was completely sound.

“Ritchie, should I work on his back, do you think?” I asked politely.

More expletives came from Ritchie’s direction as he packed up his tools. I’d never seen a farrier throw a 125-pound anvil before, but his flew into the back of his truck as though it were made of aluminum.

A few more thumps and crashes, and Ritchie was packed up. He smooched me loudly on the cheek, growled in Michelle’s direction and gave Cisco a head rub before leaping into his truck and pulling away from the barn.

Two weeks later I was back at the barn to see another horse, and Vanessa was working away busily on Cisco’s back, waving a black wand up and down the horse’s spine and applying aromatic oils to his hips and withers. She glared as Michelle scuttled up to me.

The Smell of Success

“Vanessa thinks his steep shoulder angles caused him to hurt his foot.”

I smiled at her. “Well he smells very nice. How’s he doing?”

“Dr. Diehl, you’d never know he’d been injured! I’m so pleased. You and Ritchie are the best!”

I aimed an extra-large smile in Vanessa’s direction, and left, delighted to see Ritchie’s truck rumbling up the drive. I happened to know that he was making a quick stop to recheck Cisco, and as tempting as it was to return for the show, I waved innocently and drove on.

“Thanks for the warning, Doc,” Ritchie said. “Now I smell like a Grateful Dead concert!”

I was laughing too hard to answer. Ritchie promised several kinds of revenge, and I knew he’d follow through, but it was well worth it. Plus, Cisco was doing well, and that was really all that mattered.

Bringing Up Baby
A Small Advantage