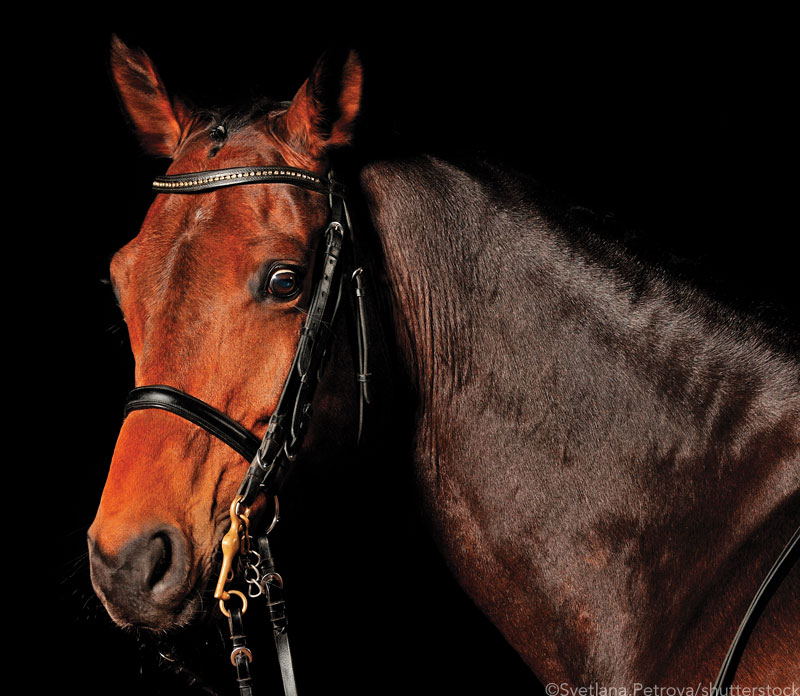 I’m bent over inspecting my patient’s forelimb at a large boarding facility when I feel a tap on my shoulder and a chirpy voice exclaims, “Oh Dr. Diehl! My horse isn’t picking up his right lead and I want you to look at him!”

My schedule is very tight today and I’m desperate to stay on track, so I politely explain and suggest that we schedule the exam for later in the week. She raises her eyebrows and smiles harder at me, explaining right back that it must be done today. No—it must be done right this minute.

I realize two things. One: I don’t know this woman, and two: it is clear that she is used to getting her way. She is tiny, easily a size zero, and when I straighten up and face her, her head barely comes up to my chest. She locks eyes with me and talks nonstop about her horse and his problems, and I can feel myself weakening.

She gestures at her horse, and I look around in dismay. Sure enough, the enormous, gleaming warmblood pawing the ground fretfully is hers, and she quickly tucks cookies into his nipping mouth as he knocks her across the breezeway with a head swing.

I know better than to say yes. This is not my client and I’m in the middle of scheduled appointments at this barn. But secretly, I’m a little proud to be so visibly sought after, especially by a well-to-do owner with a fancy horse, so I apologize grandly to my waiting appointments, promising that this won’t take long. Equally grandly, the tiny woman invites them to be her audience, and although I notice several women exchanging glances, obediently they line the outside of the arena.

We march to the arena, and Itsy-Bitsy climbs gracefully into her custom-made Hermes saddle and they move off into an extended trot. At first the horse is absolutely lovely to watch, and I am entranced by his elegant movements and her invisible commands. They make two medium circles, change directions, and then execute a flawless half-pass. Then they launch into an awkward passage, breaking the spell, and I cringe to see the stiffness in the horse’s hind limbs. His tail is wringing desperately, and she jounces erratically on his back, but her audience is loyal, and they cheer loudly.

She pulls up to me expectantly and frowns when I comment on the stiffness. His back end is just fine, she tells me. After all, he had acupressure and reiki last week by a healer who happens to be part Native American, and she also went over him with an infrared tens unit. I can hear the audience murmuring, and I just know there will be a line of women clamoring for the phone number of the healer when this exhibition is over.

“It’s his canter I want you to watch,” she commands. “I think you’ll see what I’m talking about.”

If the Shoe Doesn’t Fit

If his canter looks as awful as his passage, I’m doomed. They bounce horribly around the arena on both leads, equally dreadful, and I finally have to ask her to stop. I run my hands over the horse’s hocks and fetlocks, noticing irregular bony masses under his skin, and excess fluid in all joints. Then I see his feet. They’ve been carved into awkward, squared-off blocks, and his toes hang clumsily over shoes that are two sizes too small and are pressing into his soles.

“What in the world…?” I begin, and then stop myself quickly, but it’s too late. She pounces.

“You don’t like his feet?” she inquires in a neutral voice.

I sense that I’m walking into something I don’t want to be walking into, but I can’t help it. I launch into a lecture about the shoeing job, and she gleams at me triumphantly. I’m puzzled by her cat-that-got-the-mouse look, and then I notice a pert little creature sauntering into the arena, ponytail swinging with every stride. She shoots me a nasty look.

“This is my trainer,” announces Itsy-Bitsy with delight. She turns to the pony-tailed woman. “Dr. Diehl has some concerns about the shoeing job.”

Ponytail puts her hands on her hips and glares at Itsy-Bitsy. They engage in a rapid dialogue which does not include me, and I stand there stupidly, wishing I were somewhere else. Apparently the trainer’s boyfriend is the horseshoer, and I realize that I have just completely stepped in it. Up to my knees.

“Well, it’s been nice meeting you, but I really must be on my way…” I begin.

Itsy gleams at me again. “Do you have any suggestions for Ponytail’s boyfriend?” she inquires sweetly. Ponytail gazes somewhere over my head, a tiny smile on her face. The two women make eye contact and a knowing look passes between them. They actually start whispering together, and both giggle.
I’m suddenly tired of this game.

“Absolutely,” I snap. “Tell him that Dr. Diehl said he should never touch a live horse again.”

I take a moment to enjoy the look on Ponytail’s face. Then I smile sweetly at the women. “You both have a nice day now.”

I walk away briskly and don’t look back. So much for better judgement, counting to 10, and patience with others, I think. I’ve really put my foot in it now, and if knives could fly through the air through furious stares, my back would be full of them. I leave the arena, shutting the gate with a thump.

Ashamed of myself for keeping my appointments waiting, I apologize profusely to my clients, and get busy on their horses. They are all kind and wave it off and I feel a surge of gratitude for them.

I can’t help chuckling as I’m working, and finally one of the women glances over at me. “Dr. Diehl, what are you laughing at?”
“Myself.” I tell her. “Someday I’ll learn. Obviously not today.”
She snorts, and then pats my shoulder. “Please don’t. I’d have to leave the barn if that happened.”