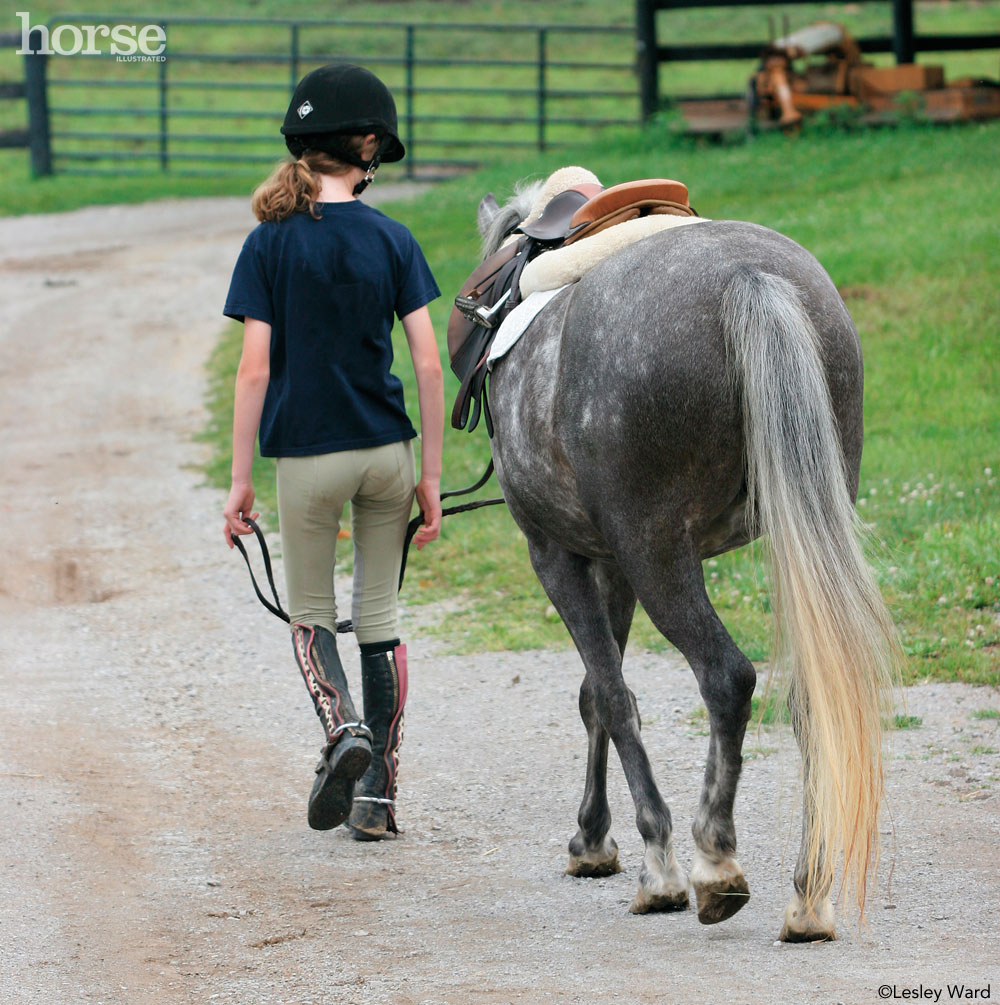 The mother looked on proudly as Harper, her daughter, clutched the lead rope attached to a very fancy looking gray pony named Maxwell. I was there to perform a pre-purchase exam on the pony, a standard exam to try to determine if a prospective horse has any soundness issues before a sale goes through, and the mother informed me that they knew he’d pass the exam with no problems and really, my visit was just a formality as the trainer had already approved him. Harper, a coltish 12-year-old, blond, kept a poker face as I confidently stepped up to the pony, stethoscope already in my ears, and began the exam.

The mother chatted away as I tried to listen to Maxwell’s heart and lungs. I haven’t yet figured out a polite way to point out that when a stethoscope is wedged into my ears, I probably can’t hear what one is saying, but many clients must assume that I can simultaneously listen for arrhythmias, wheezes, crackles and murmurs while actively participating in a lively discourse about Carrot Cruncher’s great achievements in the show-ring. My lack of participation in the conversation doesn’t ever seem to get the point across.

I was moving the stethoscope around when a loud squealing sound filled my ears. I yanked the earpieces free and watched Maxwell with interest as he extended his neck and increased the volume, his abdomen shuddering deeply with every vocalization. Another young girl was bouncing a wheelbarrow full of grain and various supplements past us and the pony clearly wanted a share. The mother was still talking about the latest horse show, and Harper had lost interest in restraining the pony and was tapping on her cell phone, so I was on my own.

I turned Maxwell away from the grain and tried to continue my exam of his heart and lungs, but now a loud crunching filled my ears and I pulled the stethoscope away again. Red slobber dripped from the pony’s mouth as Harper offered him another treat. I patiently asked her to not feed the horse while I was trying to listen to him and she shrugged, stuffed the cookies back into her pocket and returned to her phone.

Finally I moved onto palpating Maxwell’s limbs and hoof testing his feet. He was fine with the front legs, but kicked violently at me when I approached his hind end, several feet of lead rope dangling between his halter and his handler who was once again tapping on her cell phone. I had a brief glimpse of the bottom of his hoof as he cow kicked in my direction and I ducked as the foot whizzed past my face.

I took the lead rope from Harper, who hardly noticed, and shooed her away. “Can someone else please hold this horse so I can complete the exam?” I asked.

The mother went off in search of a helper, and 15 minutes had passed before a large woman came bustling out of the barn, nodded to me, seized the lead rope and brought the pony up short. She didn’t say much, but I knew I had an ally, and was able to complete my exam of the hind legs safely, the woman muttering threats into Maxwell’s ear each time he thought about kicking me. There was pain and stiffness in the right hock and some swelling in one of his tendons, and I knew that Maxwell was not going to be sound when I watched him move.

The woman clipped on a longeline and clucked to move him off. The pony went into a frenzy of plunging and bucking so violent that I thought he’d been stung by a bee. She calmly held onto the line, unruffled by the behavior, and Maxwell broke into a rapid gallop, circling her again and again, occasionally kicking out in her direction.

“Can he trot ….” I began, and then ducked as Maxwell bolted in my direction, hauling the woman toward me. She and I collided, clutched each other, and performed a perfectly synched, Double-Dutch jump rope step as the longeline passed under our feet again and again, the pony zigging and zagging, never slowing his manic pace. I looked up to see the girl pointing at us and howling with laughter, the first emotion I’d seen from her beyond “Reading Texts” and “Responding to Texts.” The mother was talking on her own phone and didn’t seem to notice what was going on as we struggled to regain control of Maxwell.

I’d had enough. “Get a saddle and hop on him!” I barked at Harper who sobered up quickly and hustled to tack up the pony. She climbed aboard and off they went, Maxwell moving fairly well through a walk, trot and a canter. The girl was a good rider and he was far better behaved under saddle, but there was an unmistakable lameness in the same leg I’d been concerned about, and X-rays revealed an old developmental bony problem that was going to require surgery.

I was glad to have such a conclusive result to make the final decision easier on everyone, and was presenting my final report to the mother and daughter, when Harper interrupted anxiously.

“But, Mom, we already BOUGHT the pony and the paperwork just came through! Does this mean we have to return him now?”

COURTNEY S. DIEHL, DVM, has been an
equine veterinarian since 2000. She resides in Steamboat Springs, Colo.,
where she is in private practice. Her first book, Horse Vet, Chronicles
of a Mobile Veterinarian, was published in 2014.