I was restocking the vet truck and the afternoon was wearing on me. For the hundredth time, I wished I had a full-time vet technician who could help with the arduous task. However, a solo veterinarian practicing in a seasonal area has to be careful with the business budget. Consequently I was often vet tech, receptionist, accountant, pharmacist and inventory manager.

As I scrubbed the vet unit out, hauled away the expired drugs and made the order lists, I was really feeling resentful. It was Sunday, and here I was working as usual. It just never ended! I could see my girls playing in the backyard, and a wave of guilt hit me. I should be out there playing with them. I should be making amazing and nutritious meals, coaxing stains out of beloved little dresses, and reading the classics to them. I was overworked, and I was a lousy mother. 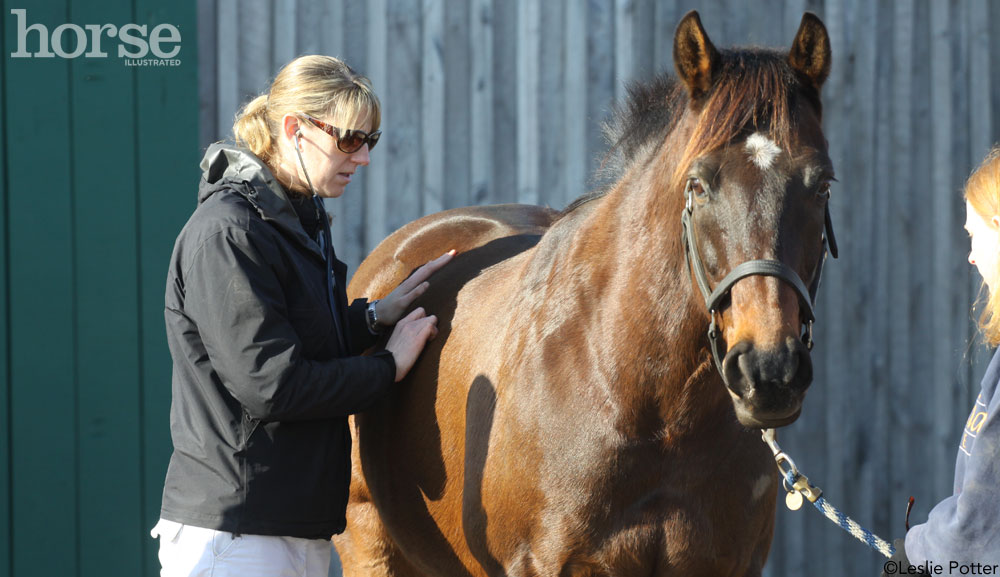 The girls raced up, each trying to talk over the other, and they jumped around in excitement, pulling at my hands. Clearly they wanted me to come see something, and I tossed the sponge in a bucket and let myself be dragged away from the back of the truck. But right as I was about to walk down the stairs to the backyard, my phone vibrated and a horrible photo of a mangled hind leg appeared on my screen. The text quickly popped up, “This is our best horse! Please come right away!”

I shook off my daughters’ grasping hands and waved away their dismayed protests. Shouting for my husband, I pulled on my work boots, running a mental inventory of what was on the truck. Had I restocked the lidocaine and suture? Yes I had, and there was plenty of bandage material and a fresh bottle of an antibiotic I liked to use. I raced out the door, my daughters’ faces in the window, and I don’t think I even waved goodbye to them. I sped out of the driveway, my phone ringing as I merged with traffic, and another frantic voice shouted down the line, describing another horrible laceration on another horse on the opposite side of town.

I did what I could with the first horse, sped off to the second, and three hours later, both were stitched, bandaged, medicated, and comfortable, and the owners had both tucked food and drinks into my newly cleaned truck when I wasn’t looking. They’d given me great big hugs and thanked me profusely for giving up my Sunday and family time to take care of their beloved horses. I winced as I pictured my daughters playing alone as I worked on my vet truck.

I was driving home when my phone rang again. It was my oldest daughter, asking when I’d be home and wondering what I’d been doing all this time. I described the emergencies to her, and she was fascinated, asking a lot of questions, and we were chatting away when another frantic text came through and I had to hang up on her because a valuable horse was colicking in the same barn I’d just left 20 minutes ago.

In despair, I turned the truck around, roared back in the direction I’d come, and spent another hour and a half battling with an awful colic. The horse was in terrible pain and the owner was in tears, and nothing I was doing was helping. I was sedating the horse for the third time when my phone rang, and my oldest daughter was on the line again.

“Mama, when are you coming home?” she asked timidly.

“Never,” I snapped. “I’m never ever going to get to come home because I’ll be dealing with emergencies for the rest of my life!”

“Now Mama, don’t worry. You’ll fix the horse and you’ll get to come home. And Papa made dinner, and we’re keeping yours warm for you!”

Suddenly I realized who I was talking to, and was flooded with shame.

My voice softened. “Thank you, sweetie. I’m so sorry I’ve had to work all day and I couldn’t spend any time with you and your sister.”

Her little voice was proud. “But you’re out fixing horses and helping people. And we’ll get to see you soon!”

I studied my patient glumly. He looked the same, and I knew that a very long night lay ahead for both of us.

“OK, Mama!” she said happily and we hung up.

I rechecked the horse’s vitals, and was surprised by a heart rate of 40, as he’d been lingering in the mid-60s. His gut sounds were chugging to life, and as I watched in amazement, he cocked his tail and passed a huge load of manure, followed by a tremendous amount of gas. The owner sobbed in relief, and soon I was giving instructions for follow up care and packing up my gear. As I was pulling away, she called, “I don’t know what we’d do without you, Dr. Diehl.”

That night as I sat on the couch reading to my daughters who were cuddled tightly against me in their pajamas, their damp hair smelling of shampoo, I ignored the baskets of unfolded laundry and mail piled on the kitchen table. I ignored the non-emergency texts vibrating my phone at intervals, and I ignored the dishes in the sink. Maybe time with my family isn’t about quantity. Maybe quality is the most important thing.

I sure hope that’s the case.