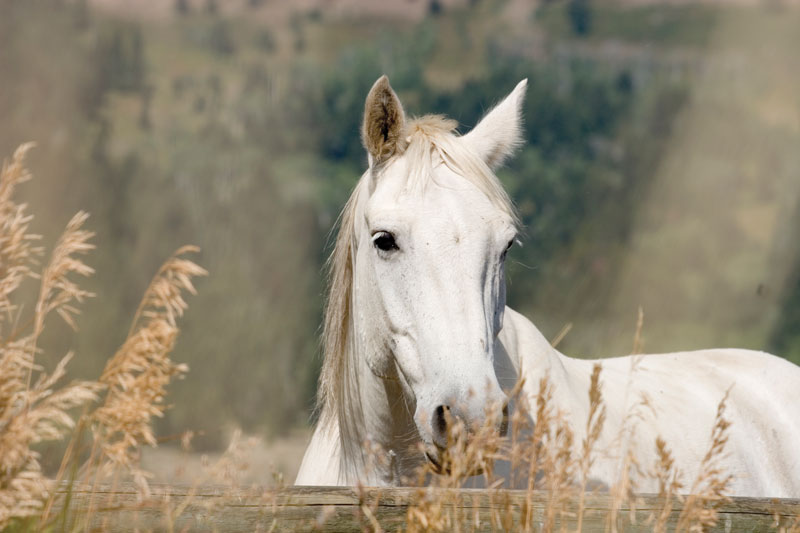 I didn’t know quite what I was going to find at the end of the long drive up the winding mountain road. The call was to euthanize a gelding that had been kicked in the leg. From what I could gather on the phone, it sounded like the injury was at least a week old and that the horse wasn’t doing well. According to the gentleman’s description, it sounded like it was a hind leg that was injured, and after much mangling of various joint names, the man finally concluded that he thought it might be in the “knee.”

I’ve learned over the years that the “knee” can mean anything, including the fetlock, hock, stifle or carpus—basically any joint in the leg that bends. Although I’ve tried to play 20 questions and get a better idea of where the injury is, more often than not I give up and just figure it out when I get there.

I pulled up next to my patient, a gray horse named Buddy standing quietly at the hitching rail. At first glance, things didn’t look too bad. I could see the injury from the truck, two masses of pink flesh over his lower leg and fetlock, but it worried me that he didn’t want to put the foot down. I parked and walked over to inspect the injury more carefully, and the big horse tensed as I approached. I patted his neck and spoke to him gently and he relaxed a little, but when I moved to his hip, he hoisted the injured leg protectively against his belly. The flexed fetlock joint gaped open horribly, the cartilage-covered articular surfaces gleaming in the sunlight, and a trickle of thick, bloody fluid drained slowly from the structure. I could have fit four fingers into the ugly hole.

A wrangler had walked up and was standing at the horse’s head, slowly stroking the gray neck and watching me. We looked at each other for a moment, my mouth still hanging open, and the young man shook his head.

I nodded mutely. Yes, of course. Euthanasia. I hurried to my truck and quickly drew up the thick pink solution and dropped the loaded syringes into my tote. When I returned, the wrangler was resting his forehead against the horse’s face, and tears flowed freely down his cheeks. He was murmuring to the horse, and I hated to interrupt, so I bent to look at the leg again, my back to them. The leg was hard, hot and painful all the way up to the hock, and I knew it was from infection. Buddy was in really bad shape.

A gentle nudge against my hip caused me to turn, and I came face to face with the gray horse. He had twisted his head around and was staring intently at me. I scratched his chin and he lipped at my hand, then he set his muzzle into my chest and nosed me, causing me to lose my balance. When I regained my footing, I was facing Buddy and could see all of him, not just the terrible injury. I stared at him. There was a big kind horse attached to this leg, and maybe I was being too hasty. Maybe I could try to fix him. I called the owner and got permission to try.

The wrangler was delighted, and ready to help. We sedated Buddy, and I shaved all of the hair away from the wound margins and scrubbed every crevice of the injury with Betadine scrub and solution. I trimmed the proud flesh back, and then went to work on the joint. I threaded a sterile catheter through the damaged tissue and lavaged the structure with sterile saline until the fluid came back clear. Then I injected a powerful antibiotic directly into the joint, packed the exterior with a paste of sugar and Betadine scrub, and bandaged the entire limb with PVC pipe to prevent the joint from flexing. Buddy received IV antibiotics, pain medicine and, although it seemed a little extraneous, a tetanus shot.

I saw Buddy daily for the next 10 days, repeating the medications and lavaging and infusing a different antibiotic into the joint The swelling had gone down by 70 percent and he was gingerly taking some weight on the limb. As soon as I felt the infection was under control, I was going to put a cast on the leg. But a phone call from the owners derailed my plans. They’d decided that they didn’t want to spend any more money on Buddy’s care, and if I didn’t euthanize him, they’d do it themselves.

The wrangler and I made some calls, and soon Buddy was on a trailer headed to a foster home. His new owners paid all of his vet bills and gave me permission to do whatever I felt he needed. Soon I was able to put a cast on the leg, and changed it at three weeks. The wound had closed up completely and was no longer draining fluid. But would any lingering infection present itself? I held my breath, but Buddy showed no signs of problems.

The day came when it was time to cut off the second cast, and there were quite a few people in the barn watching excitedly. The smell from the cast dimmed the enthusiasm a little, but once the leg was cleaned up, we all cheered to see the healthy smooth tissue around the fetlock. I transitioned Buddy to a brace and we began hand-walking him; he moved out confidently on the leg. Soon he didn’t need the brace, and after moving him to a larger paddock, the day came when he was able to go out on pasture for the first time.

Made for Each Other

Buddy was later adopted by a young woman who’d broken her leg badly in a riding accident. She was healing, but her confidence was shaken, and she wasn’t sure if she’d ever be able to ride again. On the day she met Buddy, who still wore a bandage, she watched him over the fence for a while, then looked down at the brace she’d wear for the rest of her life.

Buddy went home with the young woman, and they continued their recovery together. I have pictures of them on a trail ride, and it’s hard to say who looks more pleased in the picture, the rider or the horse. Buddy lived a good long life in his new home. He remained a little stiff on the leg, but according to his loving owner, he was just perfect.