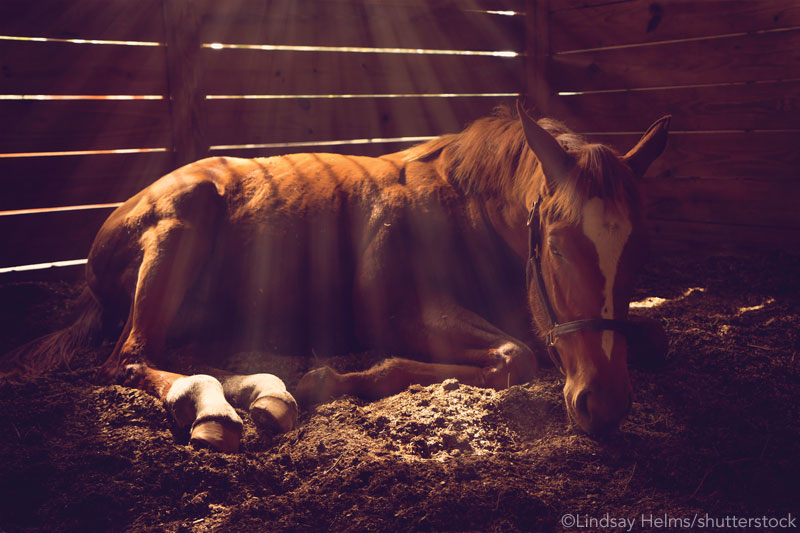 Phone calls are unavoidable in a veterinarian’s life, and can eat up a lot of time, particularly if the caller is trying to avoid a vet visit and just wants free advice. However, I’ve noticed that the more time I spend on the phone answering questions, the more likely it is that I’ll schedule a visit, so I try to see phone calls as a productive exercise. I don’t mind taking the time to discuss a case, but I’d rather see the animal firsthand than try to diagnose something over the phone, especially colic. But some owners want to try to treat the problem themselves.

The caller came right to the point.

“My horse, Nacho, has been laying down quite a bit over the last week and he won’t eat. What do you think is wrong with him?”
I looked at my watch. It was 9:30 p.m.

“How long has he been off his feed?” I asked.

“A few days. He nibbled some hay today, but his appetite is off, and tonight he wouldn’t eat at all.”

I knew what she was going to say next: that she’d been giving him Banamine, a drug that’s helpful in certain circumstances, but one that can also mask important symptoms, potentially delaying proper veterinary treatment.

“He got Banamine paste yesterday, and I just gave him some more,” she announced. “How long should I wait to see if it’s helping him?”

I sighed. It was the “stare at the colic and call the vet every hour” show, and after waking me several times throughout the night, she’d probably decide to call me out at around 3 a.m.

“It takes about an hour.” I began. “But he probably needs to be seen …”

I was talking to a dead phone. Her farm was a 90-minute drive on a deer-infested road, and it was not a trip I wanted to delay. I tried to call her back but no one answered.

Resigned to the limbo of waiting on an owner to make up her mind, I dozed lightly, phone near my head. It was midnight when she called again.

“He’s much better, Doc. He started eating about 20 minutes ago, and he just passed manure!”

I was sleepy. “Would you like me to see him tonight?”

“I think we’re OK but I’ll call you back if anything changes!”

Swell. When the Banamine wore off and the horse got painful again, I’d get another call. Plus, I never slept well on the nights when I knew I had a sick horse somewhere.

To my surprise, the phone remained quiet that night. A few days passed and I didn’t hear from her, but finally she called again, this time during the day.

“He’s acting sick again. I gave him more Banamine yesterday.”
I was firm. “I need to come see him.”

“But what would else would you do for him?”

Patiently, I explained the basic procedure for working up a sick horse and the things I would look for, and after another 20-minute phone call, we scheduled a visit for the next day.

Nacho was standing quietly when I arrived and was listlessly nibbling hay off the ground, but I could see that he was not happy. His abdomen was drawn up and his back humped and I could see several areas in his pen where he’d been laying down. His gum color was off and he was dehydrated with an elevated heart rate. No fever. His gut sounds were sluggish.

The owner was talking. “I know what you’re going to do. You’re just going to give him Banamine. I could have done that myself!” She waved the paste at me.

I had an evil urge to snatch it and fling it into the nearby river, but controlled myself. Instead, I watched Nacho closely. He lifted his tail and nosed his flank once, then returned to mouthing his hay. I sedated him lightly and pulled on a long glove, squeezed some lube onto my arm and gently slid my hand into his rectum. Carefully, I began to pull the contents out, letting them fall to the ground, and a grainy sludge of foul smelling wet sand landed at my feet.

Sand? I bent to look more closely and pressed my boot into the wet pile, leaving a perfectly formed footprint. Incredulously, I reached in for another handful, the sand on my glove scraping at his sore rectum. He shivered as I gently pulled out another pile. And another.

I tubed Nacho with a psyllium mixture and prescribed a supplement to help clear his gut. The owner was staring at my footprint in the stinking mess that had come out of her horse, her mouth hanging open. She explained that she’d read that sand was good for horses to stand on, so she’d had several truckloads brought in for Nacho’s pen.

“But the Internet never said that horses would eat it!” she wailed.

I recommended a hay feeder for Nacho, and suggested that she remove the sand. There were no more problems. Nacho recovered fully from his ordeal, and I’ve noticed that the owner is much more willing to have me out promptly when a horse on her farm is sick. But occasionally she’ll produce the Banamine paste, and while I haven’t snatched it and thrown it in the river yet, the unworthy temptation remains.