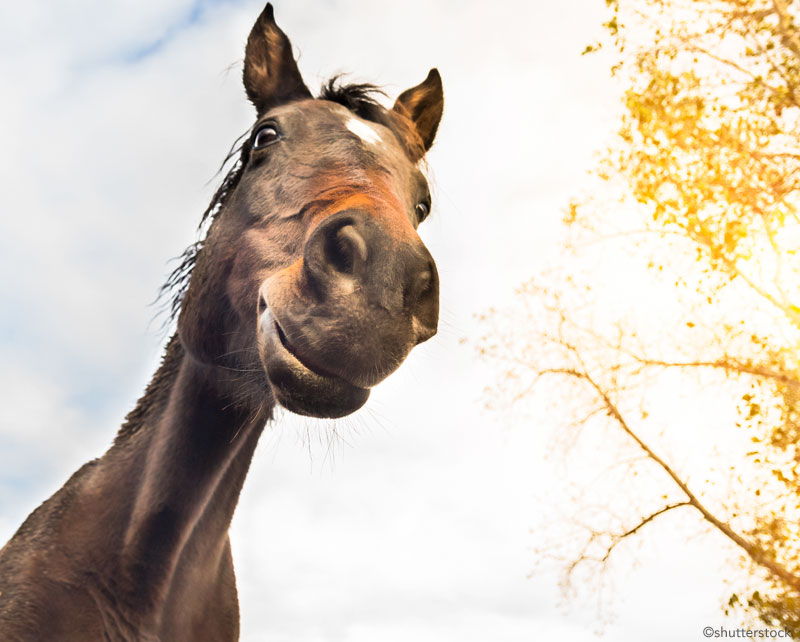 My X-ray equipment was extremely heavy, but if I draped it across my shoulders I could make a single trip into the barn. I walked a little strangely, but figured the brief suffering was worth it. A kind boarder held the door for me and laughed as I staggered past her.

I did, kind of, but the only music I’d be playing was the blues. I felt as if I’d been run over by a train. It had been a really long day and I just wanted to take the radiographs of the lame horse and go home. I’d spent the entire afternoon with him and had performed diagnostic nerve blocks all the way up to the stifle, a process which had taken hours. He and I were pretty sick of each other, but he’d been cooperative, and after the X-rays were taken, I’d be done.

The horse watched me glumly as I lurched down the aisle towards him, and right on cue, another boarder appeared, someone I didn’t know.

“I need you to look at my horse’s feet!” she announced. “I’m not sure the farrier is doing a good job with him.”

I wanted to be polite, but it really wasn’t a good time for interruptions. “Yes, if you could just call me, I’d be happy to set up an …” I began.

“Oh but this won’t take long at all! He’s right over there!”
I tried to smile. “I’m sorry, but I’m right in the middle of an …”
She kept talking. “The farrier was here this afternoon. In fact he just left, and I have to say, my friends didn’t care for the job he did.”

I was still staggering along and she kept pace with me. Before I could say another word, she pulled me to a stop and yanked open a stall door. My waiting client threw her hands in the air as she saw her vet get accosted, but I was in too much pain to do anything but set all of the equipment down.

I was preparing to continue the trek to my patient when I looked into the stall. The horse was huddled in the corner, shavings stuck to his torso and back, and there were sweat patches on his neck. As I watched, he pawed the floor miserably and swung his head toward his right flank, and then curled his upper lip into the air.

Colic. It was the horseman’s term for bellyache, and it could mean anything from a gas cramp to a twisted intestine or worse. The owner was putting on the halter and chattering away, oblivious to the condition of her horse. “When the shoer was working on him, I explained I didn’t want too much taken off his toes, because the last one who trimmed him …”

I interrupted her. “Ma’am, your horse is colicking! He needs medical attention. Who is your vet?”

She stared at me. “I use Dr. Yesman, but he’s out of town. How can my horse be colicking? He’s never colicked in his life. Maybe that shoer caused this!”

She looked unconvinced. I was drawing a breath to speak when my client, clearly tired of waiting, joined us. She took one look at the sick horse and gasped in dismay.

“Oh Dr. Diehl, please take care of him! My horse can wait.”
The woman in the stall shrugged, so back to my truck I went to retrieve my equipment. I filled my tote with different medications and laxatives. I probably wouldn’t need all of it, but one more lap to my truck might just kill me.

Fortunately the horse had a gas colic—painful, but treatable. He responded nicely to the sedative that I injected into his vein, and I passed a stomach tube with ease. I filled a bucket with about a gallon of water, and then added some other ingredients that I liked to use. This was my favorite type of colic to treat and I knew he’d soon be feeling a lot better.

The liquid in the bucket turned a delightful orange, and smelled like a citrus garden. The owner peered skeptically at it as I mixed it all together with the end of my stomach pump.

“What in the world is that?” she asked.

I grinned at her. “Best stuff in the world! This mixture will get him going! Heck, it’ll jump start a Harley Davidson!”

I waited for her to laugh but she looked blank, so I sobered up quickly. In stern, professional tones, I described what I was giving him and what it would do for his sluggish intestine. I was careful to stick to medical terms, but she continued to look blank.

The horse was dramatically improved and I gave a short lecture about how to care for him over the next 24 hours and to call me right away if he got painful again. I washed out my tube and bucket and hauled my equipment back to the truck, packed it all up, shut the doors with a confident thump, and drove away, feeling pleased with myself.

As I drove, I was aware of how exhausted I really was, and I was glad it wasn’t a long drive to get home.

I was halfway there when my phone rang. It was my client with the lame horse, and she was not happy.

“Dr. Diehl, I’m still at the barn! You forgot to finish taking X-rays of my horse, and you left all of your equipment right in the middle of the aisle, and why does this woman with the colicky horse keep telling me that you gave him some kind of Harley Davidson starter fluid?”

I apologized and made a rapid U-turn, quickly returned to the barn and took the X-rays. The colic woman interrupted again, and informed me that she’d be calling Dr. Yesman for a second opinion, as she wasn’t certain that her horse had needed all of my treatments after all.

“And you never even checked his feet!” she informed me. “I bet they were the problem all along.”

“No, I can assure you that your horse was very ill …” I began wearily, but she glared me into silence, gave me a piece of her mind and then walked briskly away, muttering something about motorcycles.

Courtney S. Diehl, DVM, has been an equine veterinarian since 2000. She resides in Steamboat Springs, Colo., where she is in private practice.