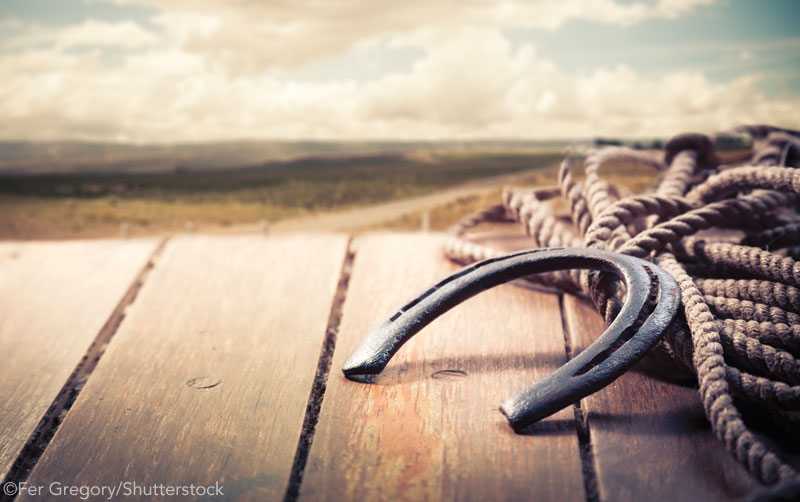 It was hard to take in what I was seeing. Forty horses coughing and sneezing, with draining eyes and runny noses, stood around miserably, ignoring the fresh hay in the feeder. The wranglers and I were busy taking temperatures, cleaning muzzles and administering medicines. Lab results confirmed equine influenza, aka “the flu.”

I had to chuckle at the sight of a younger wrangler trying to get an old horse to blow his nose on her bright red bandana, but the situation really wasn’t funny. When a guest ranch only has so many months to operate, and the leased horses that they depend on are all sick, they lose money. Add in vet costs, and the loss grows higher. I was fond of my clients and wanted to see their business succeed, but I had to make a living too. The horse owners had skipped the annual vaccinations for the herd, and the financial consequences were going to be grim.

This was a horrible blow, as their first guests were due to arrive in three days and not one horse in the herd was fit to ride. No guest ranch wants to operate with horses they don’t know, but they had no choice. The owners sent another shipment of leased horses and they opened on time, but the bad luck wasn’t over.

A String of Catastrophes

Over the next month I treated a bizarre collection of random medical problems at the same location. A mare had a deep laceration under her tail. A horse got a leg caught between two boulders and had to be euthanized. Three saddle horses lost all of their hair and itched so fiercely that they wore deep sores into their skin, and the whole herd had to be treated for lice. A colt that needed to be gelded only had one testicle descended. Was anything going to go right for this ranch?

Finally there was a lull in the string of catastrophes and I began to hope that maybe the run of bad luck had ended. I didn’t hear from the ranch for almost three weeks, and had started to relax a little. Then the call came in. A draft horse by the name of Jake was very sick and needed to be seen immediately.

I couldn’t get to the ranch fast enough. Two wranglers were waiting anxiously, and escorted me over to Jake, a massive Belgian gelding with feet the size of dinner plates. He was a pathetic sight, with his head hanging to his knees. A stream of saliva flowed from his mouth and pooled onto the ground. Filled with dread, I examined him carefully but recorded normal vitals, no strange swellings on his body, good gut sounds, clear chest, healthy heart and normal lymph nodes.

Finally I reached Jake’s head, and with effort, hoisted it up. He stared dully at me, and I saw that his tongue was hugely swollen and sticking out of the left side of his mouth. I tried to examine it but he jerked away from me, flinging strings of saliva onto my arms and shirt. After a healthy dose of sedative, Jake was more cooperative, and I pinched his tongue to see if he’d pull it back into his mouth. Nothing happened.

I explored Jake’s mouth further and tried to pull the tongue to the other side but it wouldn’t move. I pulled harder but it seemed to be stuck on something. Finally I lifted the tip straight up and felt it pulling free. A quick study of the underside revealed a deep hole where it had been impaled on a very long and sharp canine tooth!

I grabbed my dental floats, quickly reduced the offending tooth and ground down Jake’s other canines for good measure. I flushed out the deep wound in the tongue and packed it with an antibiotic gel, and then gave Jake some anti-inflammatories and pain medicine. His tongue was still hugely swollen, and I tucked it back into his mouth and propped his head up on a post.

When Jake started to recover from the sedative, I checked his tongue again. Maybe it was a little smaller, but it still flopped from his mouth. It had been trapped on the tooth for so long that the circulation had been affected and it was going to take time to return to normal. The ranch manager was desperate, so I decided to try massaging Jake’s tongue, hoping to hasten the process along. After about 15 minutes, my hands were tired and one of the wranglers offered to take over.

The guests were lining up for the wagon ride when I rechecked Jake’s mouth, and was relieved to find things considerably improved. Jake was able to withdraw his tongue normally, and the swelling was down. I’d love to tell you that the big horse was deeply grateful to his brilliant veterinarian, but he was pretty tired of me by then, and head butted me when I tried to open his mouth one last time. The wranglers hitched him up without incident and Jake and the guests drove out of sight.

It was definitely a strange case. I have never seen anything like it before or since. When I wrote up the invoice that night and described the injury in detail, I wasn’t sure how I should classify the injury, and finally settled on “tongue entrapment on a tooth.” I also wasn’t sure what to charge for the tongue massage. 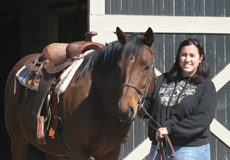