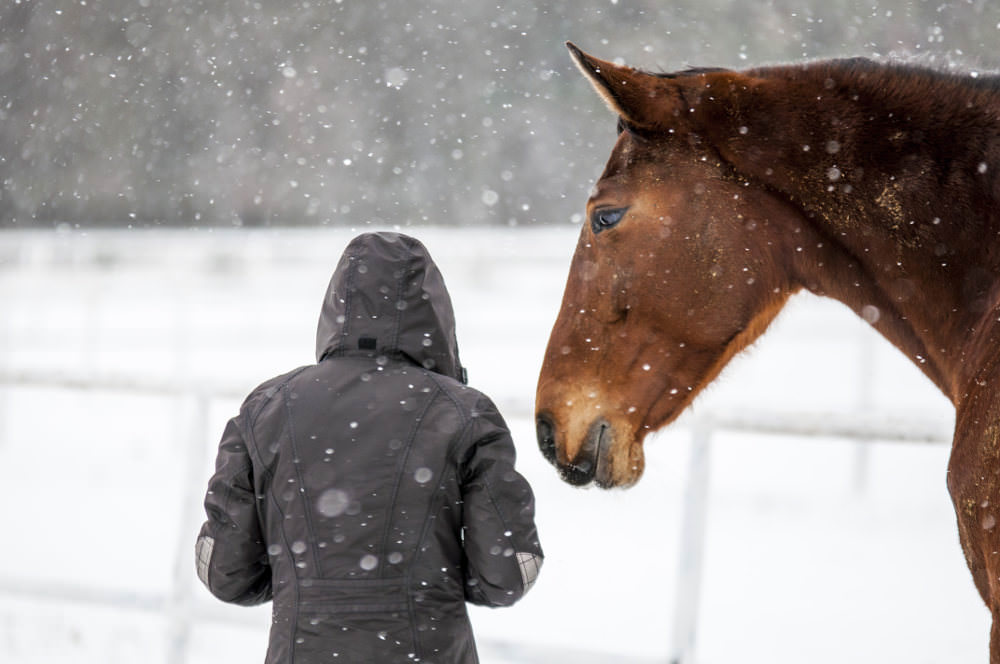 All along I thought I had it rough during the winter. Up until last year, I had spent my entire life raising, riding and showing horses in Southern California, and from December through March I was plagued with what I considered nasty weather.

Contrary to climatology lore (and at least one pop song oldie), it does indeed rain in Southern California. Every winter I had to slog through thick adobe mud in order to catch mares and foals. Seasonal trail rides presented other obstacles. I had to coax my horse to step over rows of sandbags as if they were cavalletti.

Yet admittedly, much of the time I rode in sunshine. In fact, my annual holiday lament was that the balmy temps prevented me from ever wearing my collection of horse-themed Christmas sweaters.

Then I moved to central Arizona, a region that should never, ever be confused with the parched desert valley that encompasses the Phoenix area. Instead, I ride among conifers, manzanita and stately oak trees at an elevation of more than 5,000 feet.

It’s beautiful, mountainous scenery, but it’s also downright cold once winter sets in. Maybe it’s some kind of equestrian karma, but I feel as if I’m getting payback for all the times I chided my horsey pals who were scattered around the country in places like Idaho, Pennsylvania, upstate New York and Kentucky.

The snarky jokes I scribbled into greeting cards and onto gift tags—taunts about how they had to muck stalls in snow suits or crunch across frozen tundra to reach the barn—have come back to haunt me.

In other words, I now feel their pain.

Truly, I don’t have any regrets about moving here, even when winter comes. There’s something magical about trail riding on a brisk morning, just after a light snowfall. It’s as if the whole world is scrubbed clean and wrapped in cotton. Wally genuinely seems to relish the novelty of being the first creature to stamp footprints in virgin snow.

Yet don’t be misled. I definitely had to reconfigure my approach to winter riding and adapt my horsekeeping skills.

Here are 10 of the adjustments I’ve been forced to make. For those of you who have lived in wintry climates, along with your horses, for many years, feel free to laugh at me. I deserve it.

During her lengthy show career on the hunter/jumper circuit, CINDY HALE won more than 20 medals for hunt seat equitation. She currently serves as a judge at local and regional open horse shows.