Home Equestrian Lifestyle Your Horse Life: A Horse in the House 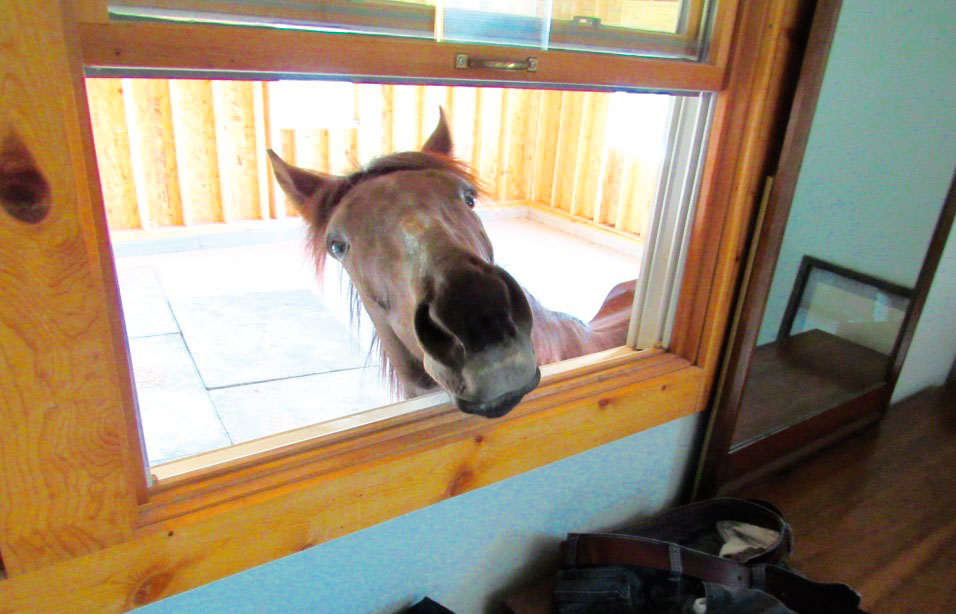 I told the media it was easy to potty train Misha, much easier than training my pup. But reporters didn’t believe me. Their opinion was that no other horses could be potty trained; a skill unique to Misha. I believed at the time they were wrong. Now I’m sure of it. 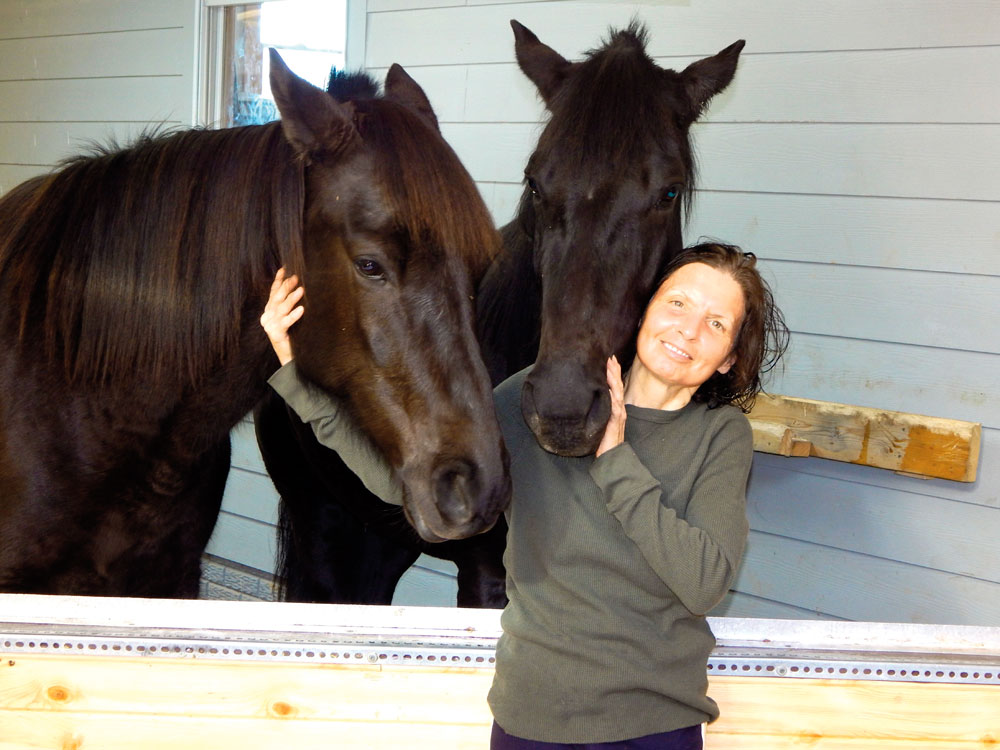 Jacqueline enjoys time with her “twins,” Boo (left) and Tiny (right)–all from the comfort of home.

In 2005, I lost Misha to colic. It took my heart six years to heal. Then, in 2011, I adopted two nurse mare foals: Tiny and Boo. Even though they have different parents, to me they are “The Twins.” They have been side by side since the day I got them.
They’re both black. Distinctly different personalities and yet to me they are almost one. It’s like I have a two-headed horse.

Like Misha, the Twins were easy to housebreak. They spend half their days sharing a room with me, something I built special for us. And lest you think these are merely pasture pets, they are not.

Both are trail horses, and usually, while I’m riding one, the other lumbers along beside us. Both pull my 550-pound Marathon carriage. 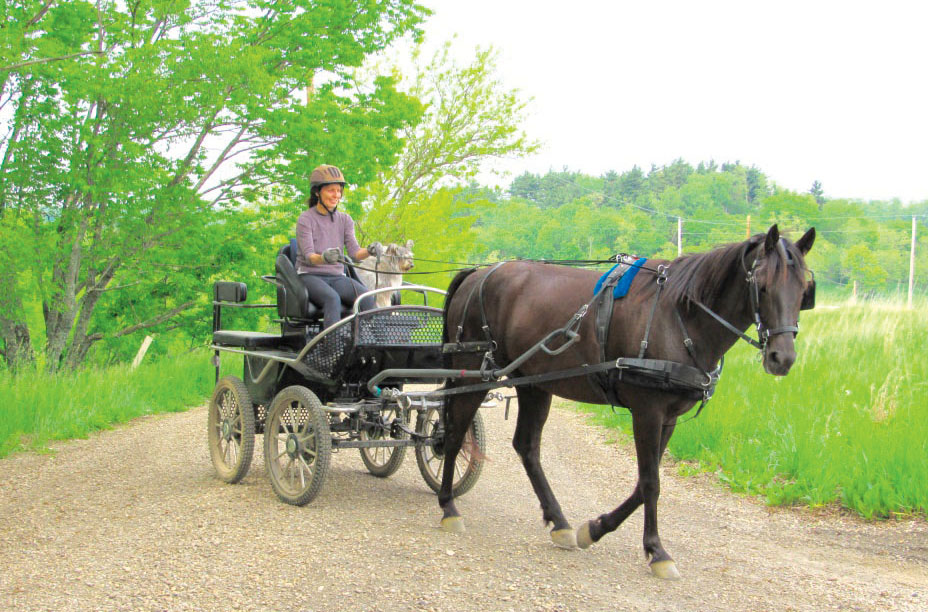 On a frigid February Monday, the 3-day old twins arrived. They were bedraggled, big bellied, covered in cuts and scrapes, and scared to death. For the first few months, my two orphaned babies lived in my three-car heated garage. They were so small they only took up one car space. 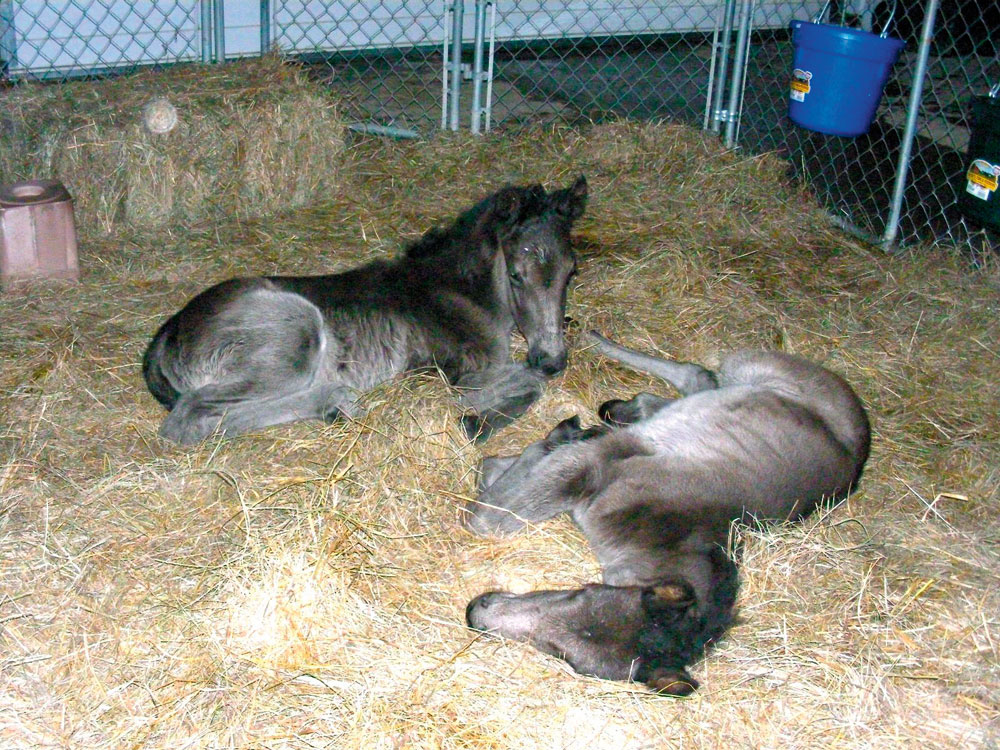 When Jacqueline first adopted the orphaned foals, they lived in her garage. That gave her the idea to incorporate custom living quarters for better horse-human interaction.

Meanwhile, I built a big stable where they could live together: no walls separate them. Even now, they still sleep backbone to backbone, pressed against each other. Many mornings Boo’s head is flung over Tiny’s legs, snoring away. They have free range outside from sunrise until bedtime, which is 11 p.m.

At 6 months of age, I moved the twins from the garage to their stable. The three of us had spent countless hours together in the garage: me reading while they wandered around me, first in the one-car portion and then throughout the whole garage. So once they were moved to the stable and pasture, unless I wanted to sit outside in the rain, snow or brutal sunshine, I couldn’t hang out with them.

The horses’ pasture comes right up to my backyard and my bank basement so the logical next step was to invite the twins inside the basement for naps and pets and brushings. Although the basement entrance has a glass sliding patio door and the opening is 34 inches wide, neither the narrowness nor the glass has ever been a problem.

The Twins had to be potty-trained to be in the basement. It was as easy to train them as it was to train Misha. Halter and lead rope on—walk out with one, then the other—and wait until they peed and pooped, then walk back in for an immediate reward, an iced oatmeal cookie or a stack of saltines. The gelding was a breeze and even to this day, he marches right out with tremendous enthusiasm and concentration and does both, lickety-split. The mare had a few accidents, but only when there was uneaten hay on the basement floor—that seemed to act as an invitation for her to pee.

A few sharp reprimands and the light bulb went off. Since then no accidents, and so our time together in the basement was a blast.

However, even with the furnace running, in the winter it is dark and cold down there. So I spent the next 10 months designing an addition to the main house to be with the twins upstairs. Since it’s not been done before, at least not around here, it wasn’t the kind of thing I could ask someone else to design.

It fell to me: all the what-ifs and how-abouts and can-that-even-be-dones. Eventually, according to my plan, I had a carpenter rip open the living room and put in a three-panel 9-foot-wide glass bi-fold door.

Then, attached to that, he built a 16’ x 12’ three-sided glass reading room with five skylights.

From there comes a 2-foot step down with a 10’ x 16’ loafing area for the Twins, which I call the Hallway of Horses. The hallway has three 4-foot long skylights and two windows with screens. 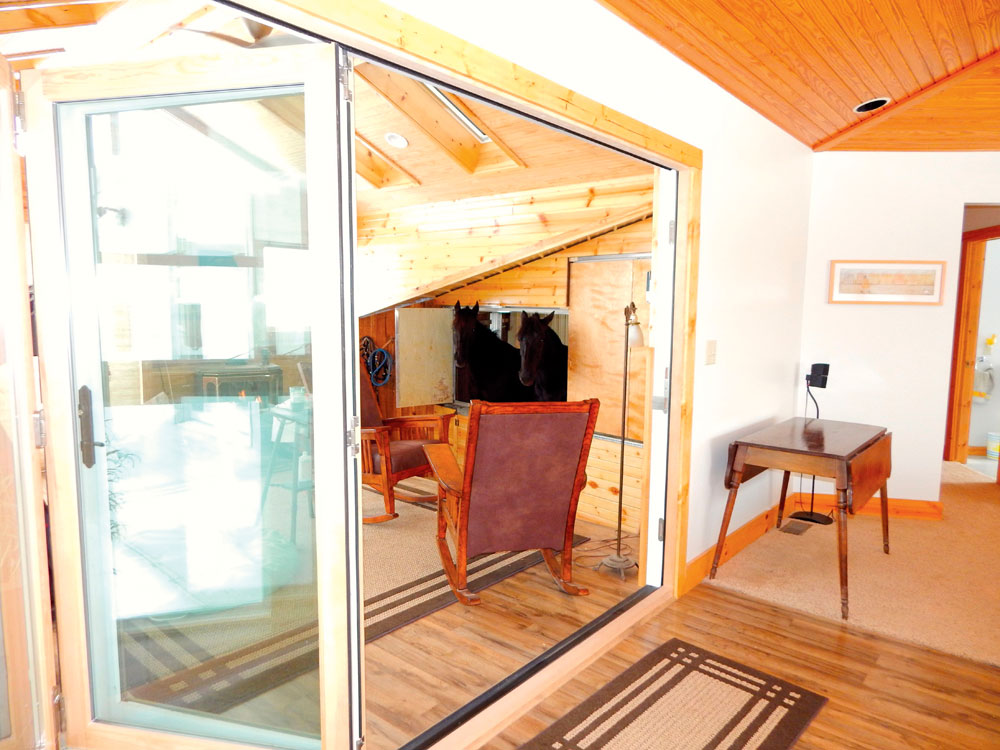 The living room opens to a glass reading room with access to an equine loafing area known as the hallway of horses. 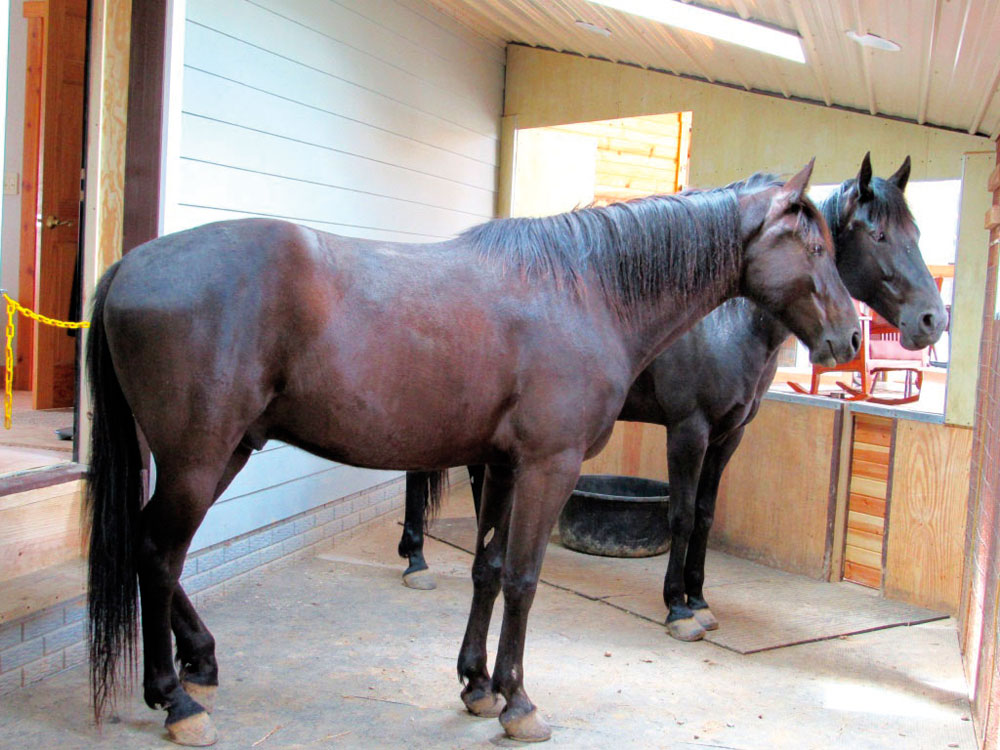 The hallway of horses gives Jacqueline two access points to join her horses, from either the back room or her reading room. 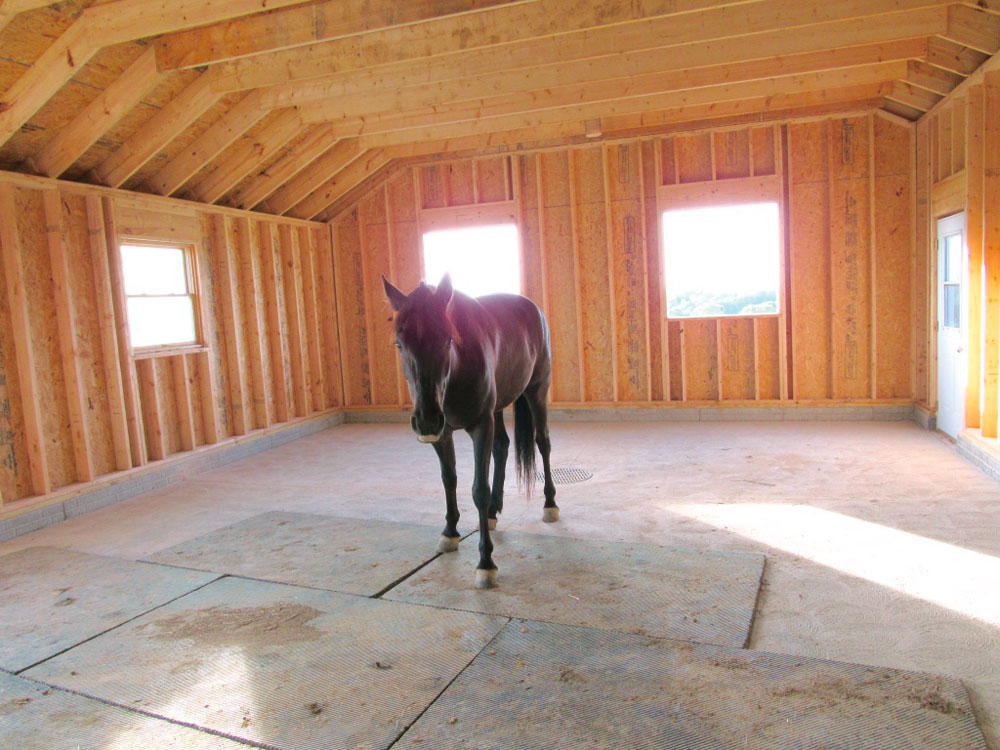 Boo hangs out in the horse bedroom. A 4-foot door gives horses access to their pasture

The Hallway of Horses has a glass door from the back room of my house, with a step down. That gives me access two ways–from the glass door or from my reading room. When I do yoga in my back room, I open the glass door so the twins can hang their heads in and be near me.

The pass-through area has a hay mow for the twins. But its real purpose is as a way to bring them in and out, to prepare them for carriage work or cool them down afterward.

Every floor except my reading area is concrete covered with ½” rubber. The Hallway of Horses and pass-through area heated with one of the largest gas Napolean stoves: 44,000 BTUs with turbo afterburner.

I am waiting to finish the walls of the Horse Bedroom while I decide what I want to use it for. I plan on a large walk-in closet for harnesses, saddles and everything else that goes with horse life. The twins may decide they want to abandon their stable and instead spend their nights sleeping in their Horse Bedroom. For now, the space has eliminated drafts and bugs into the Hallway of Horses. 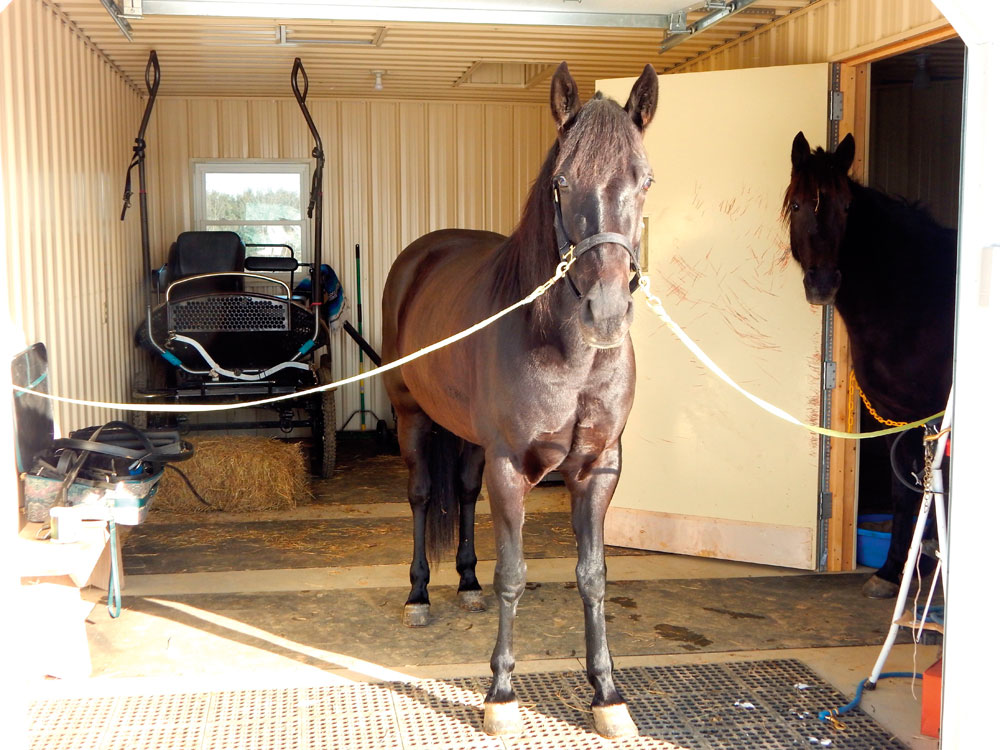 This one-car garage is where Jacqueline stores her carriage. The side door connects to the horse hallway. 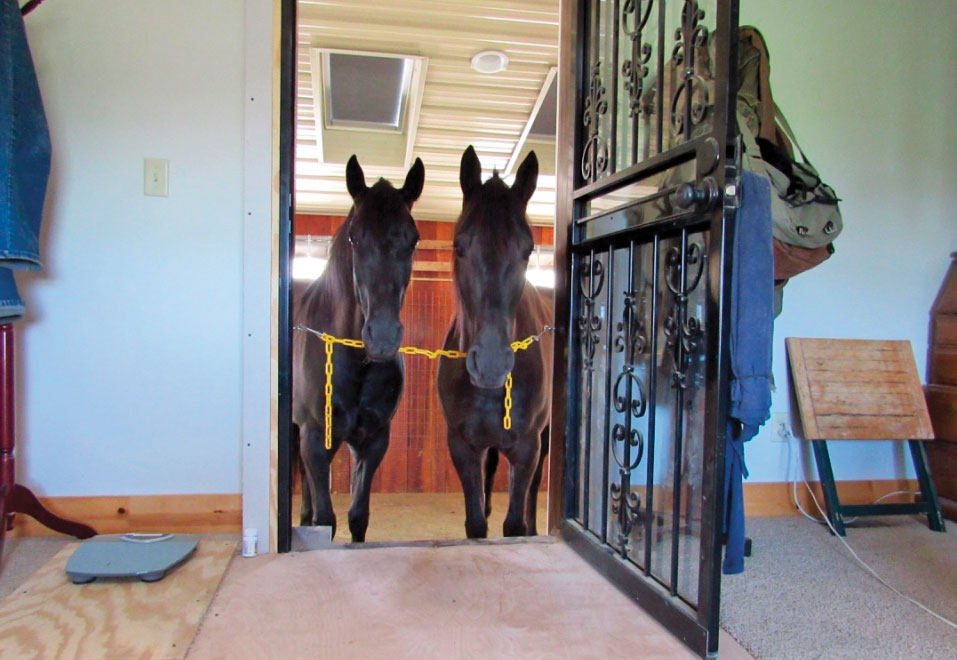 The twins peek into the back room to investigate what’s happening in the house.

So what does this mean from a practical standpoint?

Let’s say I take the horses out for some long, sweaty exercise. Once home, I hose them thoroughly with steamy hot water. They drip a few minutes, and before I bring them inside, they do their business. Then I reward them with some warm bran or wheat mash inside their quiet safe space with me nearby. An hour or so later, after napping and relaxing, out they go to graze. Meanwhile I’m right there with them so I can spot signs of lameness or other issues. Because of our close proximity, I was promptly alerted to the start of an abscess, which meant the earliest possible treatment.

And that’s another big perk of having the horses here with me: twice-a-day Epsom salt soakings are way easier in the comfort of my house than out in the stable. 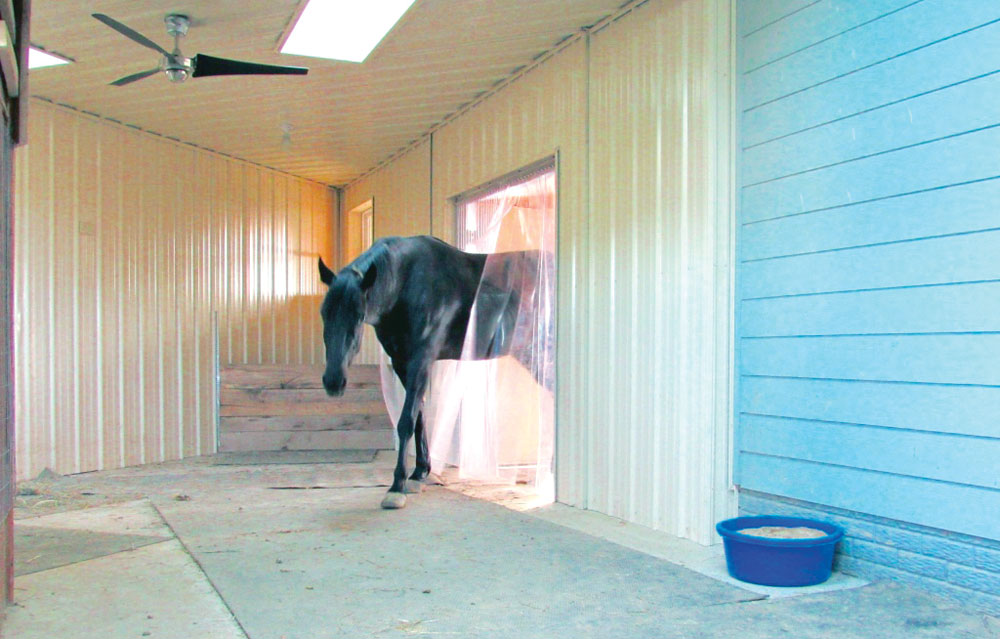 Tiny goes from the horse bedroom to the hallway. 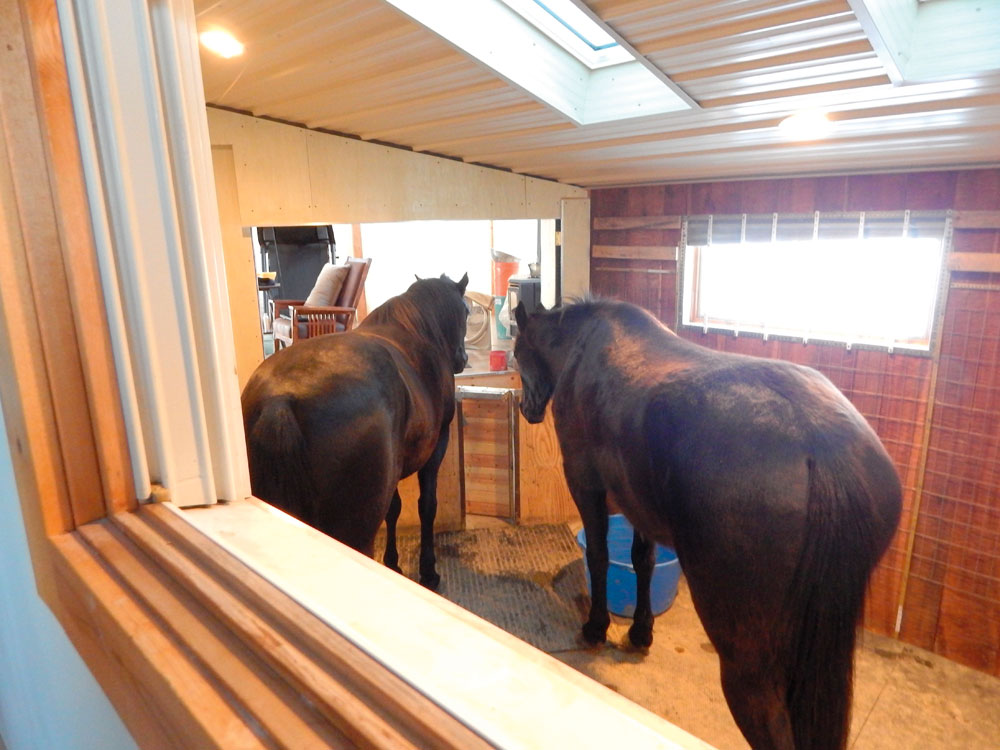 From the hallway, the twins look into the reading room while Jacqueline keeps an eye on them through the back room window.

The horses have learned that I will be touching them whenever and wherever I want to and that flattening of ears or threatening to kick is never, ever allowed. It is never OK to step near my toes. Unlike other horses, the twins are always being handled and are constantly around me so there’s no transition from idle pasture-roaming or stall boredom to “let’s go out and ride or drive.”

Fly masks, horse blankets, harnesses (both single and pair), tack and clippers—I keep them all in the carriage garage. When I take the twins out for exercise, they come to me and to their equipment; not me to them.

Why don’t more people live with their horses? They’re so easy to housebreak, and except for some dirt on their hooves, there’s nothing much to clean up. Being inside with my twins gives me never-ending joy.