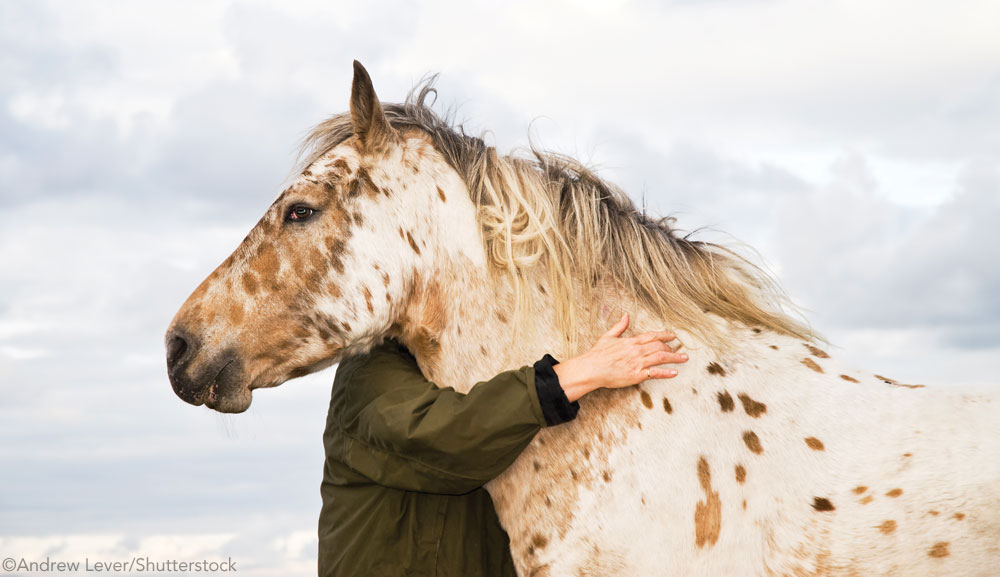 It was a choice I’d hoped to never make: euthanize my horse or have his eye removed.

It wasn’t fair to Sam. With continuous problems in both eyes over the last several years, including ulcers, scratched corneas, uveitis, medication several times a day, numerous vet visits, and constant pain until the latest injury healed, this was hardly the way for an old horse to enjoy his retirement.

Owners of equine senior citizens often have serious decisions to make concerning their horse’s health. Finances may limit what you’re able to do to make their lives more comfortable. It can be head versus heart. Some owners have no choice when the vet makes the decision for you, or if the expense is too much to bear.

In my case, I felt his years of service to his many riders had earned him some quality golden years, especially since I could care for him at home. When I made this decision, I never thought the 10 years I expected to be his caretaker would stretch into over 20 years!

I called the vet and scheduled the eye removal surgery. With help from two other vets in the practice and me (I was the “fetch-it” in the equation), the removal went very smoothly right in his stall. Sam stood quietly anesthetized with his nose resting on a hay bale to keep his head up. He was a perfect patient right down to the last stitch.

Sam spent the rest of the day and evening quietly resting in his stall. When I let him out into our small paddock the next morning, he bucked and cantered around like a horse 15 years younger. He had only one eye but, finally, no pain.

“How old did you say they were?”

I was standing at the pasture fence with a friend watching the two horses: Sam and his pal, Ali.

“They’re both in their thirties.”

“Wow! How long do horses live?”

“Forever, according to my husband.”

We both laughed. I pictured Doug, my husband, giving this answer and spreading his hands out in mock frustration.
In truth, Sam had been Doug’s trail horse after previous lives with other owners, including a stint as a show horse. He’d been given to us when he was 15, and I thought we would have him for about 10 years.

If someone had told me back then that we would have him for 20-plus years, I wouldn’t have believed them. Doug had enjoyed many hours of riding the trails near our “farmette,” even though he used to tell anyone who asked, “I ride him twice a year whether he likes it or not!”

Ali, who had been shown in dressage and was now retired, had always been the “low man on the totem pole.” But she met her match with Sam. He had equally as many (if not more) scars on his legs and flanks as she did, the result of numerous kicks and bites from their more aggressive pasture mates from the past.

After her rescue, she was destined to be turned out alone—until she met Sam.

For the first several weeks after Ali arrived to board with us, I kept them in separate pastures, but they were stall neighbors. They sniffed each other through the bars separating them in the stalls, but ignored each other when out grazing, even though they could have easily interacted over the fence.

Finally, I decided to try them together in the small paddock at the back of the barn. With a hose attached to the spigot, ready to help separate them if things got out of hand, I first led Sam from his stall to the small, fenced-in grassy area and then brought Ali to join him. They took one look at each other and promptly put their heads down to chow down on the rich grass, neither one at all interested in the other. Ali kept one ear warily cocked toward Sam, but when nothing happened, she relaxed, and they actually moved closer together and were soon grazing side by side.

A Breath of Fresh Air

I’m a firm believer in older horses being allowed as much outside time as possible to move around so their joints don’t stiffen up. As with older people, most equine senior citizens suffer from various degrees of arthritis. Since Sam and Ali seemed to accept one another without any problems, I put them together and alternated them between our two pastures every couple of weeks to allow the grass to rejuvenate.

Sam, at 35 years old, has always loved to roll in the muddiest spot he can find, and if he’s out in the pasture, he will paw at the grass to create a dust bowl, almost sighing with pleasure as he wiggles and squirms while rolling, scraping both sides of his face into the dirt.

Sam’s sight is very limited in his remaining eye due to all his past eye issues, but he has a good memory and the ability to see light and dark, so he manages to go in and out of his stall, find his water and feed buckets, and locate anyone who is holding a carrot. With the aid of Ali, Sam wanders around their pasture finding the choicest of grasses without walking into the fence, and follows her in when I call them.

It’s a match made in heaven that may go on “forever”—whether my husband likes it or not!