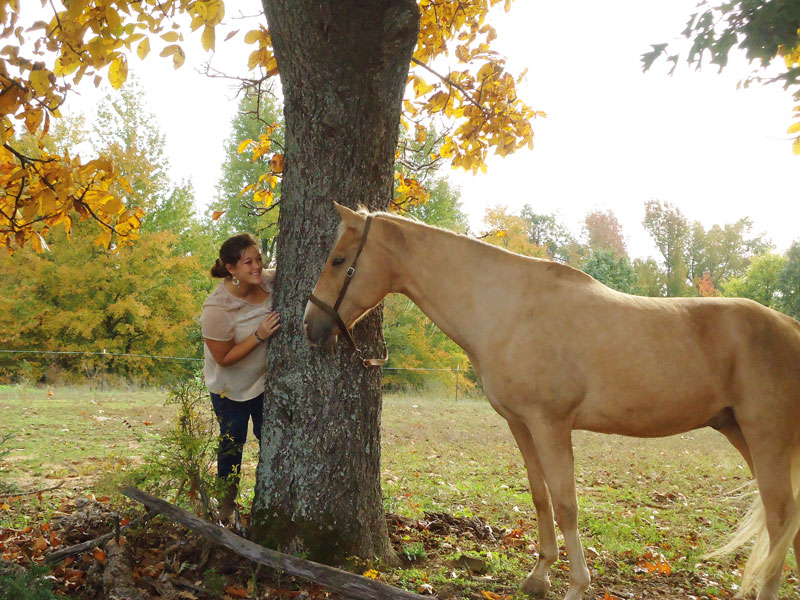 Packing a Quarter Horse isn’t as easy as packing a mini-fridge. This fact forced me to put the saddle and horse behind me when I went away to college, leaving only a horseshoe necklace to keep my barn memories close.

Graduating high school came with pride, bouquets of flowers and many goodbyes. One goodbye I prolonged as long as possible was to my beautiful palomino, Ike, 15 humble hands tall with soft, brown eyes.

My story begins with lessons at age 9 at Silver Spur Stables in Jonesboro, Ark. I rode all the barn favorites, from the stubborn but well-trained mare stuck in her ways to the swift Tennessee Walking Horse with the gait of a supermodel. I fell in love with them all, and after a few years of lessons, I made the biggest investment my heart had known: I fell in love with a horse of my own.

For about $300, I unloaded an untrained, unmotivated and confused animal from the horse trailer. His eyes widened at the arena lights, and his ears were alert to the click-clack of his unshod hooves meeting the barn’s cement floors. Approaching him with a saddle ended in a fight, and successful days in the round pen were something to celebrate.

I both hated and loved him.

When disappointment in one day’s progress met with the next day’s success, a loyalty formed between us. I couldn’t give up on him.

Long days of high school ended with rides at the barn. I watched the seasons change while cleaning horse stalls, and I took it all for granted. Had I known what it would feel like to wear boots without spurs or to say the words “I used to ride horses,” I would’ve appreciated those days more.

When I packed my life in the trunk of my car and headed to Belmont University in Nashville, Tenn., I left a huge part of me five hours away in Arkansas. Plans of studying abroad and moving farther away for grad school left even less room for a horse. But I couldn’t allow myself to think about selling Ike.

Silver Spur Stables’ owner, Dink, scouted out a young horse lover who soon became Ike’s “aunt.” She exercised him and cleaned his stall while I was off at college.

It was perfect: I didn’t feel guilty telling people I had a horse back home because I knew he was cared for and happily waiting for me on breaks. Owning a horse amounted to me posting pictures on Facebook captioned “Reunited at last” and “Sure feels good to be home.” Pulling down my saddle from the forgotten top rack, wiping off a semester’s worth of dust, throwing it over Ike’s back and climbing on felt so good.

For the first few years, this worked. But Ike’s caregiver soon bought her own mount and began competing in barrel races. I was happy for her, but I knew she had less time for Ike. It was selfish of me to think I could return to the same horse after months of not being there.

The little amount of time I gave him started to show, and I knew it was time to listen to that little voice in the back of my mind. He needed a new family that could give him the attention he deserved. A family with young children was interested in Ike, and I was running out of reasons to say no.

It was Thanksgiving break and unseasonably warm the day I waited on the arrival of Ike’s new owners. I rode him in circles, holding back tears. To keep them from finding their way down my cheeks, I thought up scenarios that would keep Ike mine. The family’s sons would hate him. Ike wouldn’t load into their trailer. A tornado would fall out of the sky.

Soon, an unfamiliar truck and trailer flung gravel in the driveway, and I had to remember all the reasons why it was best for Ike to be loved and ridden by kids who had the time and enthusiasm that school had taken from me.

Hoof-pounding nerves trampled my emotions as I watched them load my horse in a trailer headed for a barn not my own. The sound of his shifting weight and echoing whinnies was the goodbye I had fought since graduating high school.


Coming home without a visit to the barn wouldn’t be coming home at all. But a barn where I don’t instinctively walk to the corner stall awaiting a familiar greeting from a beautiful palomino isn’t the barn I know.

When I did finally go back, it was weird at first. I anxiously glued my eyes to the corner stall, looking for remnants of proof that it was once mine. I had forgotten that this is where my love of horses began. The tin roof, dusty chairs and wooden stall doors reminded me of that. No matter what horse I ride, the view from a saddle is just a nicer one, and I look forward to that view every time I’m home.

Share your story in “Your Horse Life”! Send submissions to horseillustrated@i5publishing.com.

Giving a Friend Your All