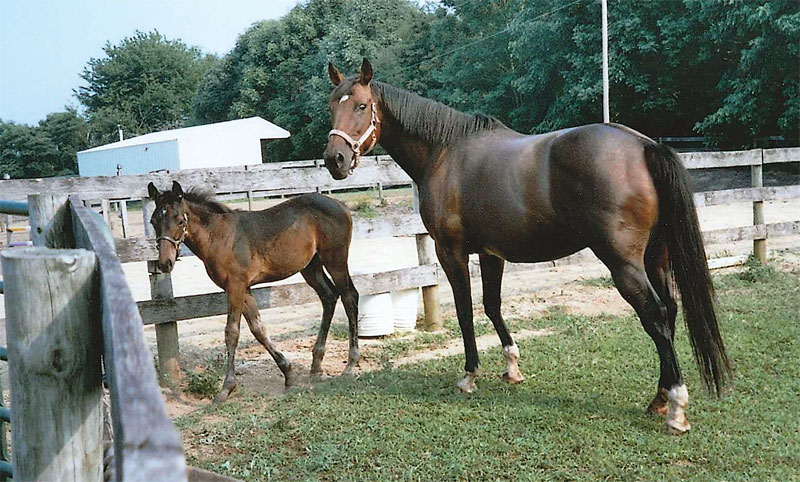 Baby Rose arrived on Mother’s Day in May of 2010

Some people might say, “What were you thinking!” when they hear that at the age of 65 I was going to breed my retired dressage horse, India. Even the vet who ended up handling India’s pregnancy said, “Why? There are so many horses available to buy!”

I guess you could say it stemmed from the time I was a 13-year-old sitting on the playground with a group of other girls, talking about what we wanted to do when we grew up. I said I wanted to breed horses. One of them laughed and said, “You’ll never do that.”

A Lifelong Love of Horses

I have loved horses my entire life. I wasn’t raised on a farm, but started with weekly rides in the pony ring at age 4; then I took riding lessons on polo ponies that doubled as lesson horses at age 8. My parents indulged my passion as much as they were able. As a teenager I continued with lessons, and spent a few years showing saddle seat equitation, which was popular where we lived.

Then for a period of about 12 years, I was rarely able to ride. Marriage, work, and having three children close together took precedence. I was 32 years old before I was able to buy my first horse, an unbroke yearling named Cinnamon. I backed and trained him myself, with direction from knowledgeable trainers, and he became a nice riding horse that I often took trail riding.

Over the next 25 years I owned five more horses, but not all at the same time. In 2001 I bought India, a 4-year-old unraced Thoroughbred, and she became my dressage project. We did lessons, clinics, occasional shows, trail rides and a three-year stint in a cavalry unit.

Then in 2008, after I had to retire her, I mentioned to my vet Theresa that I was thinking of breeding India, and she replied, “I would, if she were mine. She’s nicely bred, attractive and easy to handle.” That was all the encouragement I needed! With my husband agreeing, I began checking out likely stallions.

After some research and input from those who had bred and raised foals themselves, I went to see and assess several local warmblood stallions. I decided on Rubaiyat, an Oldenburg, standing stud at a farm not far away.

So India was bred and in foal! What excitement and anticipation I felt! We were expecting the foal in May of 2010.

So Rambling Rose, the newest American Warmblood, arrived on Mother’s Day, May 9, 2010. She was a scrawny but feisty little foal. I read all the books I could about raising and training a foal, and talked to a lot of knowledgeable horse breeders and trainers in order to learn how to go about raising my next dressage horse.

I felt fairly confident because I had worked with a number of yearlings and 2-year-olds in the past, even backing young horses for other people. Even so, I knew this would be a big challenge, and I wanted to take advantage of whatever expert help I could find.

My farrier, Mike Sapp, who is also a knowledgeable horseman, not only handled Rose’s regular trimming, but when she was 2 he would occasionally give me a leg up on her in the stall, and lead us around there a few minutes. Then, when I began taking her in the round pen for light longeing, Mike also demonstrated how to long line her. I would longe or long-line her several times a week.

There were many things Rose and I worked on daily and weekly. I groomed and handled her often. Her weaning at the age of 5 months went smoothly. She learned to stand on cross-ties, have each foot picked up for cleaning, and to accept being saddled and bridled.

I got in touch with a local dressage trainer I knew and respected, Sarah Duclos, and arranged for her to assess how things were going with Rose’s training. She came for training sessions every other month or so, telling me what was going right, and correcting me about anything undesirable, giving me things to work on between lessons. I also practiced loading and unloading Rose in the horse trailer. She was happy to walk on by herself to munch on grain I had in the trailer. I practiced loading her every month or two, finally taking her for short rides in the trailer with no problems. 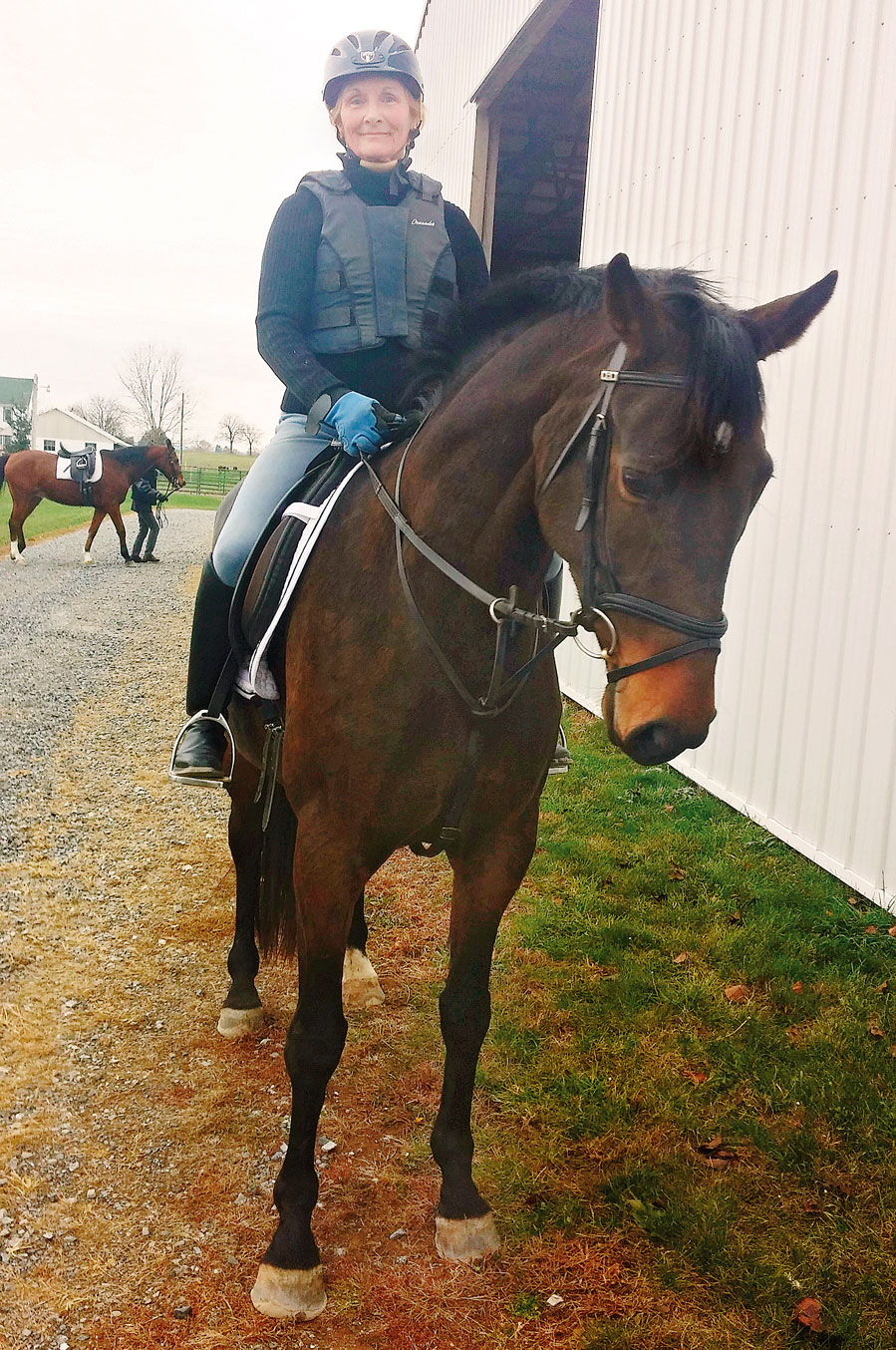 When she was 2, after longeing her first, I mounted Rose in the round pen and walked with her for a few minutes. I always made sure someone was around when I got on her, for safety’s sake.

Sarah came for a lesson and taught me a good way to bring Rose to the mounting block and mount her with no assistance, showing me how to maneuver her in place by myself as I stood on the mounting block. We progressed from there (still in the round pen) to lessons at walk, trot, and eventually a little canter. Rose was generally cooperative, only giving a half-hearted little buck now and then. We developed a routine. I always began with longing or long-lining her in the round pen. After 20 minutes or so, we moved to the dressage ring, and I mounted her for 10 minutes of walk and trot work. I tried to get in a practice session at least twice a week, weather permitting.


As a 3 and 4 year old, our lessons with Sarah were frequent, about every two weeks or so. Rose was progressing, I was happy, and Sarah thought she was coming along pretty well. I wanted to try her on a short trail ride, but at the time had no one to ride with us for safety, so it didn’t happen then.

Just after she turned 4, I had to move Rose to a new home. I had been thinking a lot about the best place for her to be, and wanted to find a place where her training would continue and expand. Luckily for me, a stall opened up in Sarah’s barn only 15 minutes away, so I moved Rose there.

Rose’s new barn has been a good learning experience for her. There is much more going on every day than at her old barn. Although there are no riding trails there, Sarah has a full sized dressage ring with mirrors at one end. Sarah’s children and dogs are running in and out, and Sarah’s clients are coming and going for lessons. Rose has gotten used to the hubbub of a busy place, and now takes it all in stride.

We are now able to have a lesson a week with Sarah, and even loaded Rose and Sarah’s horse, Scout, up for a great trail ride on reservoir trails last fall. I have ridden those trails for many years, but it was so special to ride them for the first time on the mare I bred myself! Then, a few months ago, Sarah encouraged me to take Rose to a dressage schooling show, where we rode the Intro A and B tests. It was kind of a spur-of-the moment decision for me, but I’m glad we went! Rose behaved well, and our scores weren’t bad for our first attempt at showing.

Rose will be turning 5 this year, and I think I have been very blessed all along the journey, from the successful breeding of India, through all the milestones of raising a foal. It has been one of the most fun and challenging things I have ever done. It’s never too late to fulfill a dream!

Age Doesn’t Matter at the Barn