This is a story of long-lost love. I sold my horse, then eight years later went searching for him, found him, and bought him back.

Now we are together again, even returning to the show ring, and our relationship is better than ever. I’ve come back to the true roots of why we are all equestrians in the first place: for the love of the horse.

The journey hasn’t been without its challenges, but we’ve worked together to overcome them. Because of my horse’s trust in me, he is excelling just like in his younger years. And after reconnecting with my old partner, I’m enjoying the horse life once again. 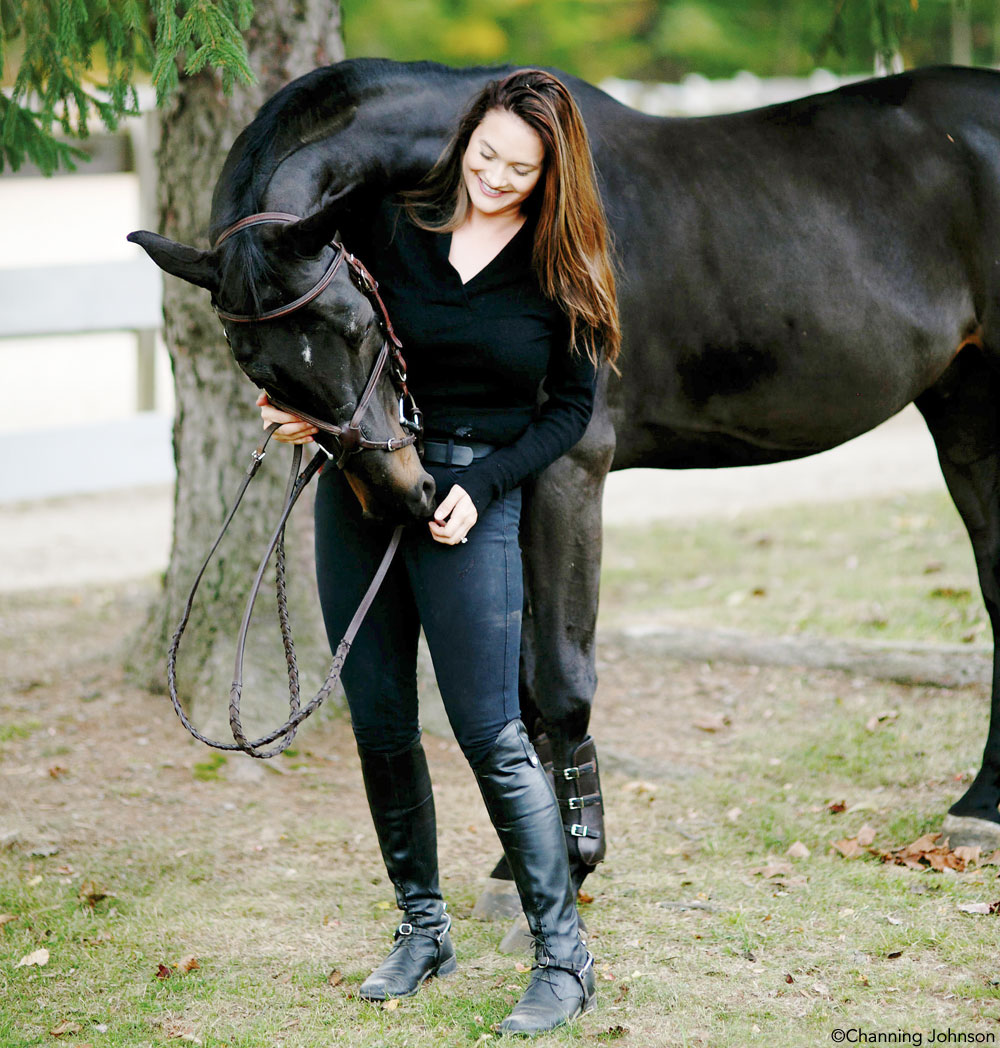 My horse, Lex Luther, is an incredible animal. While the term “incredible” in the horse world is often associated with success in the show ring, my horse has a heart that goes beyond blue ribbons.

When I was 13 years old, my parents bought Luther for me to be my first 3′ equitation horse. I remember the first and only time I tried him. It was mid-December of 2003. I had a broken arm in a cast, and I was a little afraid of riding with it. But when I walked into his stall to tack him up, I was put at ease when he licked my face like a dog. I remember bursting out laughing and thinking, “I’m not sure if this animal knows he is a horse.” After riding him for only 15 minutes, I knew that he was perfect for me.

Over the course of our four-year partnership, Luther and I were champions in age 12-14 equitation and later 15-17 equitation for Massachusetts, and he qualified me for the Massachusetts Horsemen’s Council finals three times, where we got great ribbons.
He also qualified me for the New England Horsemen’s Council Junior Medal Finals, Taylor Harris National Children’s Medal at Capital Challenge, Zone 1 Maclay Regionals, USEF Medal Finals, and led me to the grand circuit championship in the equitation at HITS Ocala, winning every single class we entered.

In early 2007, I wanted to be more competitive in the big equitation for my last junior year. While Luther was great at 3’3″, he wasn’t all that comfortable at 3’6″. My trainer at the time suggested we sell him and lease a horse with more scope. Luther was then sold to a family in New Jersey.

I moved on and did everything from the big eq to standby for the Maclay National Finals, but it was bittersweet because I didn’t achieve those things with Luther, my oversized black Lab. I opted not to ride in college, choosing to focus on my studies in business school.

Truthfully, I had burned out on the junior riding circuit, where it was all about winning and not about the love of a horse. Even though I moved on from the show world, my room was always decorated with pictures of Luther.

Two years after I graduated from college I was living in Boston, my room still decorated with his championship ribbons and pictures. One day as I was watching a horse show live stream, I decided to find out what had happened to Luther.

After six months of searching USEF records and a whole lot of social media stalking, I finally found my old friend. He had since been sold twice and made it back to Massachusetts, specifically to Red Acre Farm in Stow with Mitch and Kathy Steege—only 20 minutes from my office.

On October 24, 2014, I saw Luther for the first time in a long time. I yelled across the field to a horse that hadn’t been called the name I knew him by for almost eight years. But when I called out “Luther,” he immediately came running over to me. At age 17, my old friend knew exactly who I was.

I can’t even begin to describe the emotional connection that I have with Luther. It was especially touching when he rested his head in my arms, and then smelled the mints in my pocket and started licking my jacket and face to get at them.

In the eight years we’d been separated, he lost his right eye due to uveitis and had retired from his show career. He was now working as a school horse in the Steeges’ program, where they had taken excellent care of him. However, it was heartbreaking to see him watch my every movement as I left. He watched me walk across the road to my car, and even as I started driving away, he was still watching.

That November, I signed up to take lessons on my old friend. Over the winter he brought me back to finding my passion for riding. He even started licking my face again like he used to almost 10 years ago.

Fast forward a few months to April, when his then-owner offered to sell him back to me (she was no longer able to ride). My incredible husband saw how happy this horse made me and how happy I made him. He gave me a big hug and said yes to buying him back! I cried the whole way to sign the sales agreement.

Even at 17 and with one eye, this horse meant more to me than any fancy show hunter. Kathy gave me a great big hug and welcomed me with open arms to the Red Acre family.

I really wanted to try showing him again, but Luther hadn’t competed since he lost his eye. Mitch and Kathy gave me an incredible amount of support, saying that if I wanted to show him, we should give him every tool necessary. So we injected his hocks, worked him into peak fitness, and I practiced making sure I could accurately guide him to jumps off a right-hand turn on his blind side. 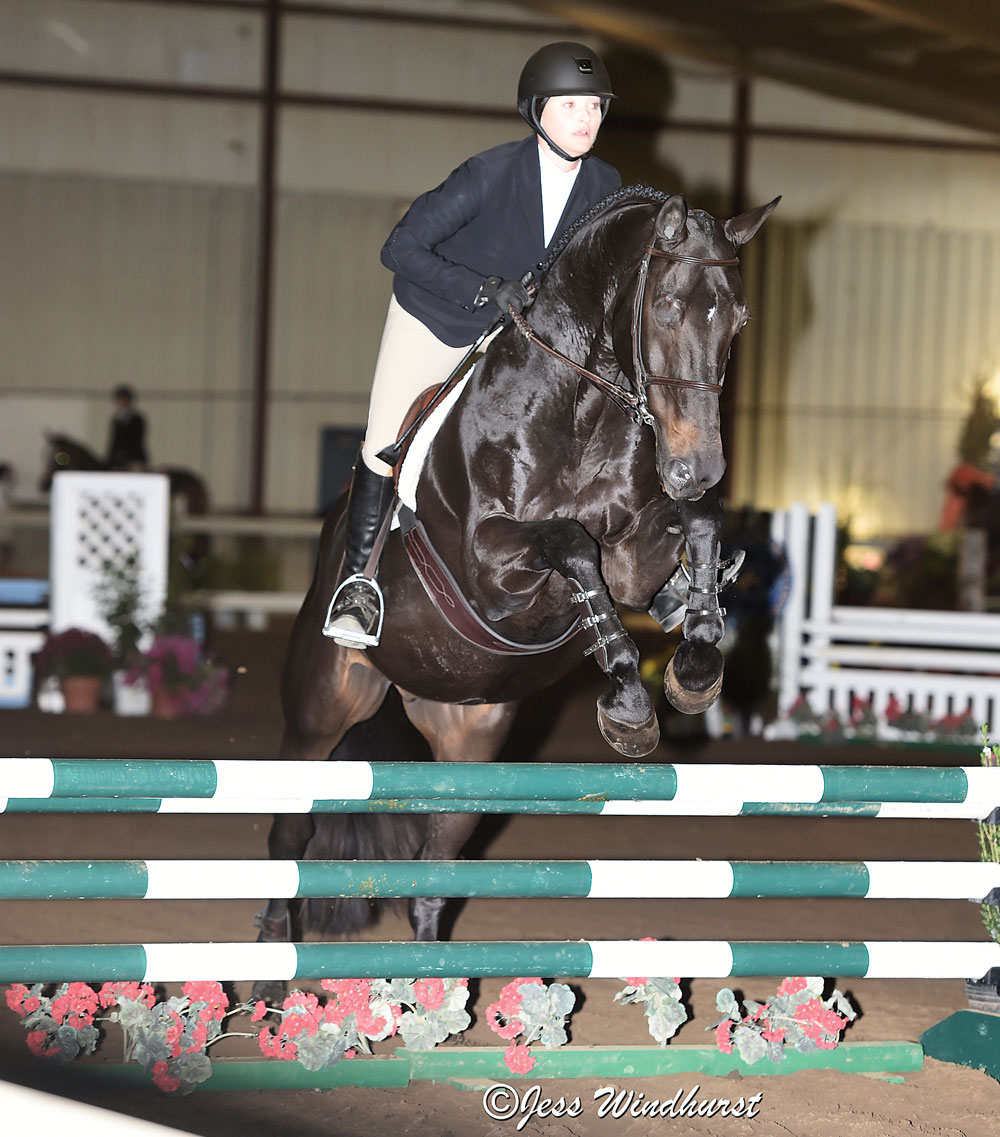 This horse has an incredible story because he has been through so much with several different owners. Despite losing an eye, he was still a perfect school horse and has overcome every challenge in front of him. My trainer and I both cried when he marched right around the 2’9″ adult equitation.

I love this animal with everything in me. He tries so hard at home and at shows to never miss a beat. I feel this horse would do anything for me, as I would for him. That’s truly what this sport is all about, loving your horse and him loving you right back.

Someday when Luther decides he’s ready to retire, we will build him a barn on our property. I came back for my first love, and I’ll be forever grateful that I did.

Liked this article? Read more “Your Horse Life”:
The Horse with One Speed
Graduation Day

“Out of the Wild” to Bring Mark Rashid’s Horsemanship to The...