On my 16th birthday, I received the best gift of my life: a beautiful pony I could have only dreamed of. As we grew together and successfully competed in numerous disciplines, I always counted on having this pony for the rest of his life. “Bucky” and I had a connection that most horse and rider pairs only hope to find. However, as time passed, education and career questions loomed large, until I found my calling.

On Dec. 28, 2007, I enlisted into the United States Marine Corps for a four-year active duty contract. After graduating from training and being stationed in Camp Lejeune for only a short time, my parents in Michigan informed me that because of the bad economy, they were forced to sell our farm. I saw no option other than to sell my pony. I wanted to help in any way possible, and saw no other solution with me being so far away. 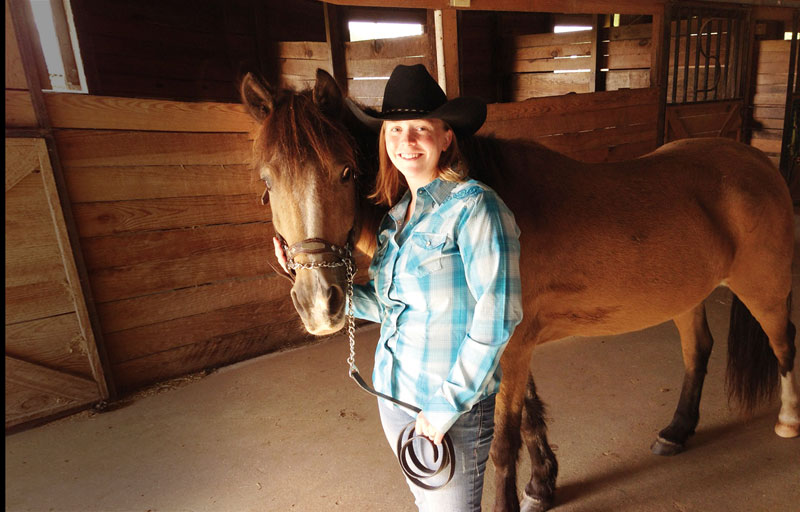 My career took me to Afghanistan twice. I saw a different side of the world, met different people, and was introduced to a completely different way of life. Even after five years and a re-enlistment, Bucky never left my thoughts. I had dreams and sometimes even nightmares of what could have happened to him.

Finally, I confessed to my husband that I just could not stop wondering. I needed answers. I considered various ways to find Bucky, and finally decided to start with Craigslist. I posted on every Craigslist city section for Michigan. Not even a day later, my phone rang. It was Bucky’s owner on the other line.

She was so nice and caring; I could tell by her voice that Bucky was loved. Even though I knew he was safe and healthy, I had hopes that one day we might be reunited. I still thought of him every day.

I was so grateful just to know where Bucky was that a second call was certainly not expected, but his owners contacted me and offered to let me buy Bucky back. Without hesitation I purchased him, and only a short time later I found a shipper willing to bring him to North Carolina.

It is amazing to me that even after five years, my pony remembered me. Bucky came off the trailer and I walked him to his stall. I closed the door and immediately he stuck his nose out over it. This is something we used to do during competitions away from home. He would bring his nose over the wall and I would kiss it. I was finally able to do it again.

We both had changed during the time we were apart. I saw war and he saw new homes. We can each only imagine what the other has gone through, but all that matters is we are together now. Even with me facing orders to Japan, we will find a way.

I am so grateful to all those who played a role in this happy ending to our story. Everyone involved became a hero and a friend to me. My heart is whole again now that Bucky and I are finally reunited. I no longer have to worry about where he is or whether he is safe; it’s almost as if we were never meant to be separated.

The people who helped us also reminded me of why I became a Marine. The hospitality and generosity all these people have shown is something I have always loved about our country.

Red White and Blue Gear for Your Horse