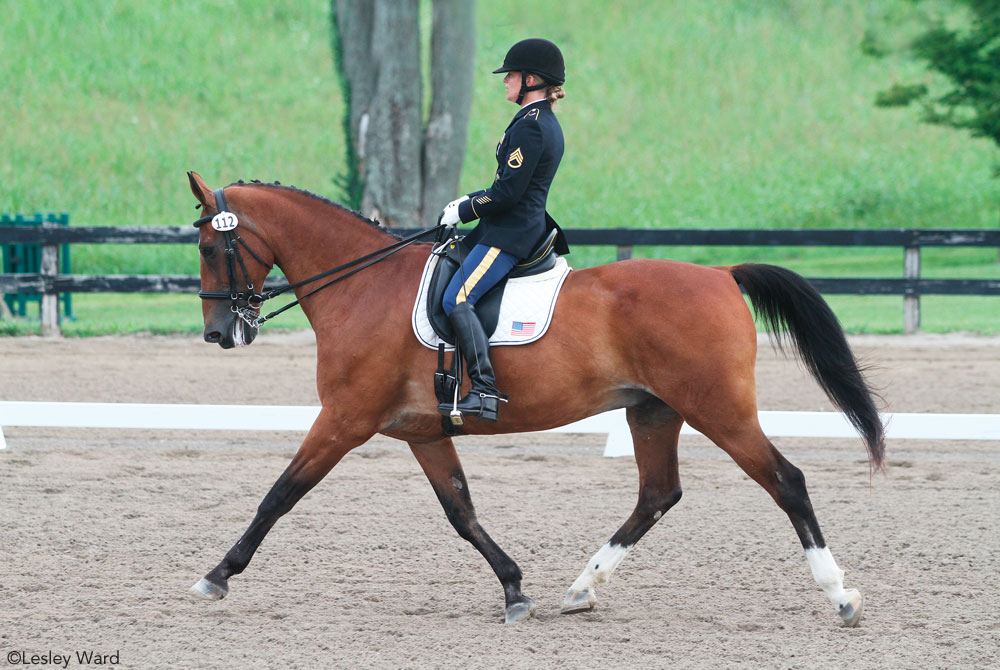 It can be difficult to tell one dressage rider from another at a show because everyone tends to wear black coats and white breeches. But I’m pretty sure that I don’t blend in with the others in the warmup area. Why? Because I wear my military uniform when I compete.

I was always interested in the armed forces. When I was 6 or 7 years old, I’d be out in the woods playing G.I. Joe with my brother. After my first year of college, I had to figure out a way to help pay for school, and joining the Army was a great way to do it. I’ve been in the reserves since 1996. I typically serve one weekend a month and two weeks a year.

In 2002, I was deployed stateside in Operation Noble Eagle where I worked as a diesel mechanic. Several months later, I was sent to Afghanistan for nine months, where I served as the motor sergeant in charge of all of my ordinance troop’s equipment. That’s where I met my husband, Shaun. Currently I’m a drill sergeant, and I spend several weeks a year training troops.

The skills I’ve learned in the reserves help me every day in my job as the general manager and head trainer of Meadow Lake Equestrian Center in Lancaster, Ky. The army honed my leadership skills, and taught me good time management. My experiences in the Army have also helped me learn how to be a member of a team and work for something greater than myself. These skills come in handy at Meadow Lake. Everyone laughs when they hear that I’m a drill sergeant, because they think it’s the perfect job for me! Yes, there might be a bit of yelling as a drill sergeant, but the job is really about teaching a civilian how to be a soldier and how to be a member of a team.


Riding may seem like an individual sport, but you are part of a team. You partner with your horse, your trainer, your farrier and your veterinarian.

I’ve always wanted to show in my uniform (which is permitted in the rulebook). Aside from my husband and two sons, my greatest loves are horses and my country, and I’d been looking for a way to combine them.

But first, I wanted to find a horse that would wear the uniform proudly with me. I found him a couple of years ago. Le Roy is a 21-year-old Dutch Warmblood who was entrusted to me by a friend. Le Roy helped me earn my United States Dressage Federation silver medal, and we’ve competed through Intermediare 1. We’re currently training for Grand Prix. I have several wonderful coaches, including Reese Koffler-Stanfield, and I recently attended a clinic taught by Conrad Schumacher.

I began wearing my uniform last year, and it definitely attracts attention when I compete. People often come up to me and thank me for my service, to which I reply, “It’s a privilege to serve.”

It was a big decision to wear my uniform while competing. I feel a lot of pressure when I put it on, because I’m not just representing myself, I’m representing my brothers and sisters in arms. Wearing my uniform reminds me of what’s important, and now I think twice before complaining about a bad score or ride!