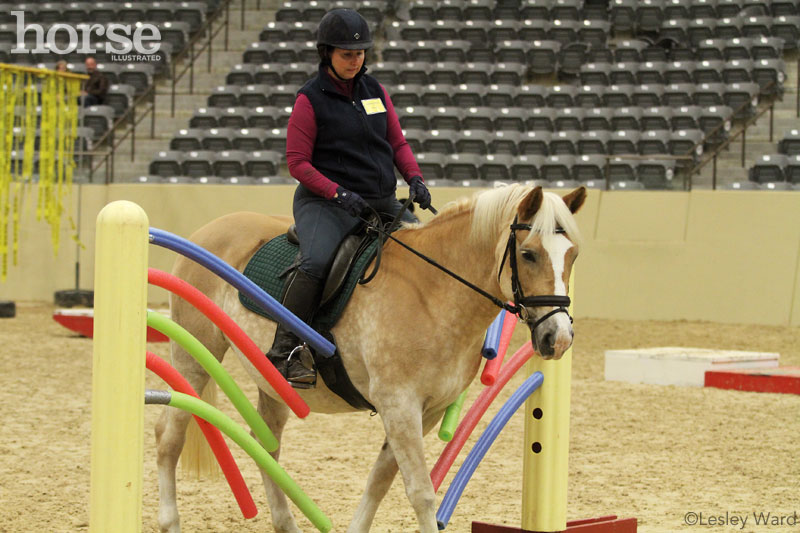 This past October, I had the opportunity to ride in the Mounted Police Civilian Sensory Clinic at the Kentucky Horse Park in Lexington, Ky. This clinic is put on in conjunction with the National Mounted Police Colloquium, which is a seminar and competition for mounted officers as well as search and rescue, mounted park rangers and volunteer posse members. The civilian portion of the clinic is offered to riders who want to bombproof their horses using the same techniques that police horses are trained with. Bailey and I don’t plan on chasing down criminals, but I wanted to take the clinic to do something a little different with my horse. We took this year off from competing in dressage, and, to be honest, I was a little bored.

Bailey TOF is my 14-year-old Haflinger mare. We have been competing in dressage for seven years. She is a good horse, not spooky, level-headed but forward, and behaves well when we go to shows. The clinic is promoted to help the bond between horse and rider, and there’s no competition in the civilian portion.

Then it was time to mount up for our equitation session. One of the instructors was a retired Royal Canadian Mounted Police (RCMP) officer, which was a special opportunity. This clinic is the only time an officer of the RCMP works with civilians.

After talking about the importance of correct rider position, we took to the rail in single file and began a serpentine exercise to warm up our horses and supple them. Once the horses were moving nicely at the trot, we broke into groups to work on leg-yielding and turns on the forehand, which get your horse’s attention when he’s acting spooky or silly. I was happy to hear comments about how nice my position was! The last thing we worked on was transitions. The tip that stuck with me was to think of riding a transition like swinging on a swing set: Use your seat and then legs before you use your arms. And all transitions, either up or down, must be ridden forward.

Our next session was sensory and drill work. We started by walking single file, trying to keep an even distance between each horse, as we circled over a row of cavalletti. Next, we moved on to riding in pairs, while still in line. Walking was not too hard, but at the trot we had to communicate with each other to stay side by side.

My only fail of the day was trying to sidepass over poles, keeping the front legs on one side and the back legs on the other. Bailey wanted to step over the pole.

She was OK with the large circus ball until she saw it move. The officer helped us desensitize using a smaller ball, bumping it up against her legs until she ignored it. Once she realized she could move it with her front legs, we had a blast trotting up to it and pushing it around. After that, the circus ball was easy. Bailey sniffed it and put her head on top of it while I moved it with my leg. Eventually she pushed it with her shoulder, but we preferred playing with the smaller one.

After lunch, we moved on to the obstacles. We started out working our horses in-hand, using rope halters, which I had never done before. I liked using a rope halter because of the level of control, but the long rope was tricky. Both Bailey and I kept stepping on it! 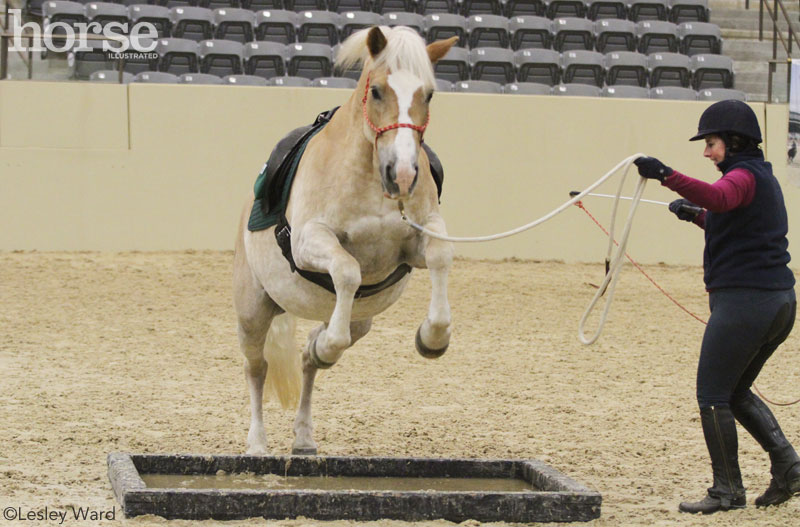 Asking Bailey to step on a mattress was surprisingly easy. However, the water was more difficult than I thought. Bailey loves water, but she would not step into the liverpool. She eventually jumped over it. One of the officers came over to help and said jumping it was OK because it meant that she was listening to my forward aids. Several tries and lots of praise later, she stepped through like it was nothing. We walked through pool noodles and hanging yellow tape, over wooden platforms, and across a teeter-totter. The pool noodles touched Bailey on both sides of her body from the legs up, and it took a little bit of convincing to get her to walk through them. She didn’t bat an eye at the teeter totter.

Then we mounted up and rode through the obstacles. Bailey and I got through all of them, including a special double obstacle, mattresses placed between the pool noodles.

After participating in this clinic, my trust in Bailey has grown stronger, and I feel like this is going to help me while trail riding. In the past, I’ve dismounted when we came across something tricky or spooky because Bailey got upset and wasn’t paying attention to me. Now I have more confidence that she’ll listen to my aids and trust me if we see something scary like a deer running out of the trees. I was actually able to test out my new skills recently when a cat caught Bailey’s attention while I was riding her. She started stepping backward, but I stayed in the saddle and asked her to go forward. Thanks to the clinic, I feel prepared to ride her through distractions like this safely.