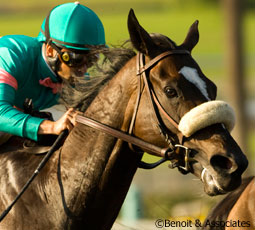 It’s another colt for Zenyatta!
April 2, 2013 – The great racehorse delivered her second foal, a healthy colt, on her 9th birthday.
Read more >>

Zenyatta statue will be unveiled at Santa Anita Park this month
September 18, 2012 – The great Thoroughbred race horse will be immortalized near her home turf.
Read more >>

Zenyatta Awarded Horse of the Year Title
January 19, 2011 – The fan favorite earned the coveted award after the final year of her remarkable career.
Read more >>

Working out with Zenyatta
Get a jockey’s eye view of Zenyatta’s workout.
Watch Now >>

Zany for Zenyatta
Take a quiz about this sensational Thoroughbred racing mare.
Take the quiz >>

Vet Adventures: Veterinary Care Alone in the Middle of the Night