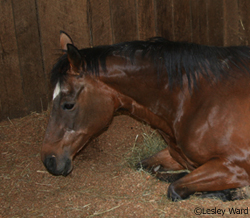 Ever wonder what your horse might say if he had one hour to talk? According to legend all animals are given the ability to talk for one hour tonight, precisely at midnight. The tale began as far back as the 5th century when a Christian poet suggested that farm animals kneeled at midnight and spoke in adoration of Baby Jesus, who’d once shared a stable with some of their ancestors. Centuries later, St. Francis of Assisi included live animals during a retelling of the Nativity, which caused a resurgence of the legend throughout Europe. Even today, many animal owners believe that their livestock—along with their household pets—acquire the gift of speech on Christmas Eve. Of course, to overhear what they’re saying requires quite a bit of stealth, as the animals will only talk when they think they’re alone. But maybe… just maybe… if you tip-toe out to the barn a few minutes past midnight you might hear your horse expressing himself in the most human of tones.