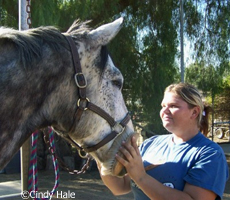 Are you looking for a way to earn some extra money? Becoming a part-time groom for a riding stable or professional trainer might be one way to help support your horse habit. Though you won’t get rich, you will be able to add to your piggy bank. Whether you get paid in cash (which can be spent at the feed store) or you trade sweat equity for riding lessons, work as a groom keeps you near horses and using the skills you’ve already acquired.

Can’t figure out how to get started? Don’t know where to look for a grooming job? Here’s some insight from Amanda Goff, a young horsewoman who has already earned a reputation as a hard-working groom.

“I was a typical horse crazy girl,” she begins, “and I started taking riding lessons when I was 10. But after a while my mom couldn’t afford them anymore. But I still found ways to be around horses. Supposedly I was at math tutoring, but I’d sneak out and go next door to a stable and pet the horses.”

Despite slinking away from tutoring, Goff made high grades and the honor roll in school, awards that finally convinced her parents to buy her a horse. It was a small mare named Molly that Goff rode on the trails and competed in barrel racing. Then, eager to earn some extra cash, the then 14-year-old noticed a local ranch that had a herd of fine looking Welsh ponies in its front pasture.  Never one to be accused of being shy, Goff boldly rang the intercom at the front gate and asked if they needed someone to help out with the ponies. Though at first she was dismissed, Goff didn’t give up. Eventually she made contact and ended up with a part-time job working with the pretty ponies.

“They were Section A Welsh ponies,” she says, “and I learned how to hitch them up and drive them. The owner and trainer was Gary Johnson, and I also discovered something else. He owned elephants. I thought it was just a silly rumor, but sure enough, he had seven, including a baby that was born while I worked there.”

These weren’t just any elephants, but pachyderms famous for appearing in Hollywood films like George of the Jungle and Evan Almighty. During her time spent handling both elephants and equines, Amanda Goff learned how the two species differed.

“Well, for one thing, an elephant can kick in any direction with its hind legs. You have to be really careful! And, obviously, they have a trunk. So I’d be handling or bathing them with my back turned and I’d feel something on my shoulder and it’d be their trunk, sort of investigating me. It took a while to get used to that. But mostly,” she adds, “elephants are very, very intelligent and sensitive, more so than horses.”

After her stint working for Johnson, Goff moved on to gain experience working at a major racetrack and also for renowned reining trainer Donnie Bricker. This breadth of exposure to various disciplines causes her to formulate these three rules for success as a groomer.

“First, listen to the trainer. Accept that there’s more than one way to do things. Your job is to do it the way that particular trainer wants it done. Second, have common horse sense. You have to be able to tell when a horse is uncomfortable, a little sore, or fresh, and communicate these observations to the trainer. Third, you must be a self-starter. Get to work on time, know your duties for the day, and get going. Because it can be hard work, you have to want to be a groom.”

Next time you’re wondering how you can add to your barn budget, consider being a groom. If you don’t see any help wanted ads in your area, gather up your courage. Visit local stables and post fliers soliciting work. Call local trainers and inquire if they’d like help longeing babies or cleaning tack. And never be afraid to ride up a driveway and ring the intercom button.