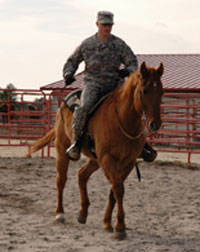 UPDATE: Since the original publication of this article, the military stable at Fort Bragg has been closed and the horses sold. Read more >>

Original Article: Although the glory days of the United States Cavalry are long gone, horses still serve the military. At Smith Lake Stables, adjacent to Fort Bragg, N.C., 36 horses are owned by the U.S. government and serve their country in two assignments. In one assignment, they act as equine ambassadors, linking the civilian public to the military. The horses are used in an annual summer camp program and in weekly day camp activities for home-schooled kids. But the horses’ most important role is their real job. They help prepare active duty personnel, particularly Army Special Forces troops, for challenges in foreign countries.

“The first time we used our horses to train Special Forces was right after 9/11,” explains Mark Rossignol, business manager for Smith Lake Stables. Fort Bragg is home to the U.S. Army’s Special Operations Forces. “They were being sent to Afghanistan, and often the only way they can travel over there is by horse.”

The rocky terrain found in remote areas of Afghanistan isn’t easy to traverse, even by jeep. Native horses become a mode of transportation. Pack animals, especially donkeys, also become familiar partners. For some of America’s elite troops, however, knowledge of horses and their four-legged relatives isn’t familiar territory. The first time they actually halter a horse, saddle it and ride it may be at Smith Lake Stables.

“That’s why the only horses we get, that the government buys, are what we call dead broke,” Rossignol says. “We can’t afford to have anyone get hurt.”

But there’s more to it than just learning about tacking up and riding a horse, Rossignol says. The troops also learn herd management and how to treat common equine health issues affecting equines.

“We teach them about anatomy and basic vet care,” he says. “That’s because many times these troops are working with the local people.”

That’s one side of the Special Forces that isn’t often seen by the Americans at home. In order to establish a good rapport with an agrarian or nomadic society, a Special Forces member might offer to help care for sick or injured animals owned by local peoples. It’s all part of spreading goodwill.

Yet despite the benefits of maintaining a select group of horses for military training, the horses associated with Fort Bragg have faced some budget cuts. Land originally used for pasture was deemed too valuable for grazing, and horses were moved from the actual military base to their current home at Smith Lake Stables, a few miles away.

Nonetheless, the horses doing duty for Fort Bragg continue in their roles, serving their country in a vital way, much like their cavalry predecessors. They may be the unsung heroes of today’s U.S. Army.