Home Lifestyle Get Your Head Together 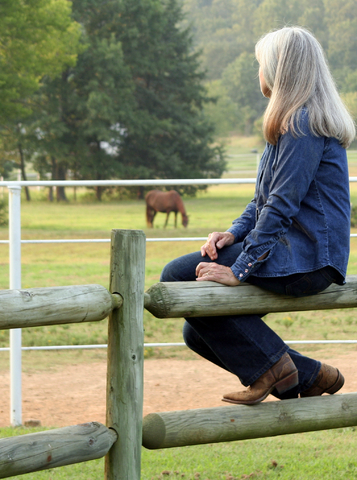 By the time Dr. Janet Sasson Edgette meets her clients, they’re usually struggling mightily to overcome some anxiety in their equestrian lives. Many are working toward transitioning to a higher riding or competition level, while others are grappling with fear following a significant riding-related accident or injury. Either way, Edgette says riding-related fear can stop an equestrian cold. And ignoring it, she adds, takes a rider from fearful to downright panic-stricken in no time flat.

“I’ve had people come to me and say, ‘I’m at the point where I’m anxious just driving up to the barn,’” says Edgette, who has a doctorate in psychology. Specializing in equestrian psychology, she is the author of Heads Up! Practical Sports Psychology for Riders, Their Families and Their Trainers, and an A-circuit hunter competitor. “That escalating anxiety can start first when mounting the horse, then when grooming the horse, and build until just driving to the barn causes anxiety.”

Edgette says it doesn’t always take a major accident to shake a rider’s confidence. Failure to keep control when a horse balks at a turn or an obstacle, or a bolt on a trail ride can instill fear even in experienced riders. And while one incident may be enough to send a rider’s confidence into a tailspin, it takes lots of work to build it up again.

That’s partly because many riders have a tough time accepting the fact that they are fearful, Edgette explains. They attempt to talk themselves out of their anxiety rather than getting professional help. But the pep talks rarely work.

Instead, Edgette suggests that riders respect their fear, then take a step back to a more comfortable riding level. “If you have a fear of cantering after an incident, do something else you feel comfortable with,” she recommends. “If an incident happened on the trail, then ride in the arena until you build your confidence.”

The solution seems simple enough, but riders are not always willing to step down a notch to rebuild their shattered nerve. “They say, ‘I’m spending too much time and money on this to step backward,’” says Edgette. “But I’ve never seen anybody be successful riding beyond their confidence.”

What’s more, riders who do decide to return to their comfort zones don’t want to stay there for long. “People want to rush it,” she says.

So Edgette advises riders to remain at a comfortable riding level until they’re hungry to push it up a notch. “For example, if an incident took place on the trail, and you’re riding around the arena with a field outside, don’t venture out until you really want it,” she says. “Then stack the deck in your favor. Don’t do it when it’s windy, or there is some other condition that makes you anxious. Wait for better conditions.”

Dr. Paul Haefner also advises his clients to take it slow at first. An equestrian who returned to the sport after a long layoff, Haefner sees many adult amateur riders who find their skills and their confidence levels are not what they were in youth. Generally, their anxieties are based not on serious accidents, but rather on the fear that an injury-causing incident might be lurking around the corner.

“When people have been away from equestrian sports for a long time, they discover that they don’t have the nerve they had when they were younger,” says Haefner, a licensed clinical psychologist based in Leesburg, Va., who competes in hunter/jumpers and dressage. “In our 20s, we realize we can break. Therefore, people tend to be more fearful as they get older.”

So Haefner advises returning riders to take a realistic look at their goals and their expectations before mounting up again. “People have the same goals they had when they were in their teens, and often their expectations are that they will come back into the sport at the same place where they left off,” he says. “So they need to evaluate their expectations.”

That means objectively evaluating current skill level, physical fitness and what risks — physical, emotional and financial — you’re willing to take. Then it’s time to focus on your riding discipline, and how you might get back into equestrian sports by adjusting the riding sport and the level at which you plan to ride, says Haefner.

“Maybe you don’t want to go back to jumping fences. You could try another discipline. Eventually, as confidence returns, many people find themselves going back to what they were doing in the first place.”

To Haefner, who is also a student of natural horsemanship, stepping out of a particular discipline also requires riders to better understand their equine partners.

According to Haefner, most riders are taught to ride at a young age. But they are rarely schooled in the nature and behavior of horses. The relationship between horse and rider is critical to equestrian sport success, he says. And by understanding how and why horses behave the way they do, anxious riders have a new set of tools for working their way through stressful situations.

“If you ask people what makes a good relationship, 90 percent would say that good communication is the key,” says Haefner. “So riders have to ask themselves what they know about their horses, and how they can become a responsible partner in the relationship.”

In fact, equestrians should make the most of all their riding-related relationships, especially with their trainers, who can be valuable allies in the battle to move forward from anxiety to renewed self-confidence.

“It’s important for trainers to know about a rider’s anxiety because a person may be able to execute, say, a canter one day and not be able to do it the next,” says Edgette. “Most trainers want to be empathetic, and it’s better to express your feelings rather than ride through a situation.”

Liked this article? Here are others you’ll enjoy:
Conquering Your Anxiety

Patrice D. Bucciarelli is a freelance writer based in Florida.