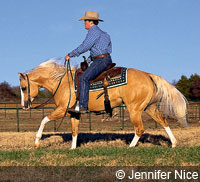 Teaching your horse to lope off on the correct lead can be achieved in three simple steps: the set-up, the cue and the release. World-champion reining trainer Casey Deary, of Deary Performance Horses in Weatherford, Texas, explains how.

The key to getting the correct lead every time is to set the horse up properly for the lope departure before asking for a particular lead. The horse’s outside hind leg is his driving leg. Therefore, if that leg is underneath the horse when he is cued to lope, there is a better chance that he will lope off correctly.

Once the horse understands how to lope and which lead to pick up, Deary will refine the cue. “I will put my outside leg on the horse to ask for the lope, but when he tries to lope off, I will hold him back. Then, when I am ready to lope, I will cluck, release the horse, and let him lope off.”

The horse learns that, when Deary pushes with his outside leg, he is to move his hip away from Deary’s leg but wait for the verbal cue to lope off. “The cue to lope is me clucking,” he says.

Don’t turn your horse’s nose to the outside. “I will only do that on a young horse the first two or three times I ask him to lope, until he understands what I am asking,” Deary says. “But I sure don’t want to make a habit out of it. I want the horse looking to the inside when I lope off.”

Don’t lean in to influence your horse to pick up a particular lead. “On a younger horse, I may lean forward a little bit, but on a broke horse I expect the horse to do all the work,” Deary says. “When I put my leg on the horse and cluck, I expect him to pick up the correct lead without me having to push or lean.