There are only a few diseases that I really hate.  Lymphosarcoma is one of them. This disease is a cancer of the lymph tissue. Thankfully horses don’t get cancer often, but when they do it’s usually deadly and it’s usually this disease.

Cancer is the uncontrolled growth of cells that develop into masses, commonly known as tumors. They may invade healthy tissue sometimes as a more diffuse blanket of cells throughout the tissue similar to roots of a tree spreading throughout the ground. The tumors themselves release chemicals into the body that cause several different side effects such as weight loss, depression, anorexia, fever, anemia just to name a few. Once a cell type or tissue becomes cancerous it can spread through the blood or lymph system to all regions of the body and become tumors anywhere.

In the case of lymphosarcoma, the lymph tissue becomes cancerous, often starting with one lymph node and spreading to others. The lymphatic system is the body’s defense network and lymph nodes are small nodules throughout the body that filter lymph, destroy infections, and produce white blood cells. People often refer to these nodes as “glands.” Along with the lymph nodes, there is also lymph tissue that is diffusely spread throughout organs such as the intestines and the skin. Any one of these “glands” or lymph tissue can become cancers, hence the symptoms of the disease can vary greatly depending on the location of the cancerous tissue. There are four general types of lymphosarcomas which are categorized on location. The four main types are generalized (multi-centric), intestinal, mediastinal and cutaneous.

The generalized form is the most common and includes multiple peripheral and internal lymph nodes. Basically, it is tumors through the lymph nodes of the body. Common sites are the nodes (glands) around the throatlatch, in between the jaw, at the base of the neck, superficial inguinal, mesenteric, and the pectoral region. The most common clinical sign of this type of lymphosarcoma is large masses on the chest, at the base of the neck, under the jaw, and at the throatlatch. Ventral edema is very common as well as weight loss. Sometimes the diffuse lymph tissue within the skin can also be affected which manifests itself as a severe ulcerative dermatitis, where the skin literally erupts with crusting sores that don’t heal. This form also has the lowest survival rates, often only weeks to a few months.

Intestinal lymphoma involves the diffuse tissue within the intestinal wall. Involvement in this area causes malabsorption problems of the intestines. This leads to severe weight loss, diarrhea and sometimes colic. Mediastinal refers to the lymph nodes within the chest in between the lungs. Tumors in this region can cause coughing, increased heart rates, fluid on the chest and even fluid within the chest.

The best and least deadly form of this disease is the cutaneous form which, is lymph nodes that turn into tumors under the skin and don’t migrate throughout the body. Horses with these types of tumors typically do very well and live fairly long with minor clinical symptoms.

Unfortunately, if large tumors are not visible, diagnosis can be difficult. There is also overlap of the different types, which leads to further diagnostic challenges. A biopsy of the tumor can confirm the diagnosis, but can sometimes introduce tumor cells into the blood stream which could cause the cancer to spread further. An ultrasound of the tumor is typically very characteristic and diagnostic. Often a diagnosis is made from clinical signs such as weight loss, masses, depression, edema of belly and legs, fever, diarrhea, skin crusting and scaling, coughing, high heart rate, blood changes such as anemia and a variety of other symptoms caused by the tumors that affect the tissue they are close to.

Treatment is also difficult; many horses don’t survive longer than a few weeks or months. Chemotherapy has been proposed, but often financial constraints and side effects severely limit their use. Some herbal remedies have been helpful for those horses with a less aggressive disease. Corticosteriods have been shown to be helpful but high levels are often needed and secondary laminitis has been documented. Interestingly, some tumors have progesterone receptors and sometimes pregnancy can reduce or eliminate some cutaneous tumors, but the use of progesterone for treatment is not widely accepted. 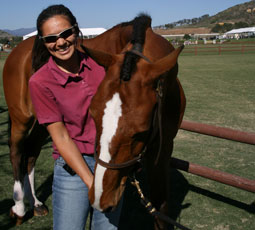 Dr. Posnikoff has been a longtime contributor to Horse Illustrated. She currently heads her own practice, Orange County Equine Veterinary Services, in Orange County, Calif.

Other articles by Dr. Posnikoff: